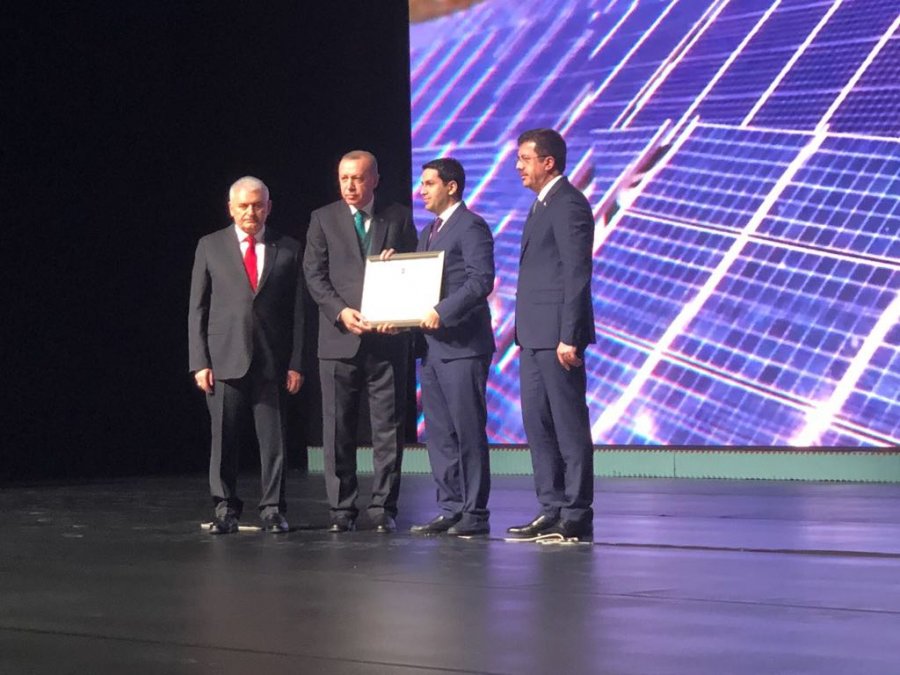 In order to have a cleaner future in Turkey, as you all know, I have for many years had a dream to spread renewable energy and make it a pioneered entrepreneurial initiative. With the appropriate conditions emerging in 2012, we established EkoRe, and with its 100% local solar panels and its free from energy dependence vision, it gained a “Project Based Initiative’ worth $2.2billion last week

I remember in my university years, I would read articles carefully about renewable energy. I would dream about getting into the solar energy sector whilst I was working for the family business between 2001-2011. I had realized however I wasn’t able to make this possible, especially during times where as a company we were going through some tough obstacles. With the money I borrowed from my father at the end of the 10 years, I invested it into the solar energy sector. I had written about this topic in a previous article: http://serhansuzer.com/en/my-15-years-in-business-and-notes-on-the-future

I am in the right sector however I got off on the wrong foot. I first entered in 2011 with the CSP (Concentrating Solar Power) and Parabolic Trough technologies. In simpler terms, it was a pipe system made of mirror and special alloys which was creating warmth from high pressures and heat, and in conjunction with water, it would produce steam. Then this steam would be given through the steam turbine which would produce electricity. During that period, I made an analysis in my first 6 months to find that the CSP technology wasn’t going to be able to compete against the PV (Photovoltaic). This was due to the fact that those in the CSP sector were persistently trying to produce electricity. PV was a technology that was producing electricity directly from the sun’s warmth and the prices were constantly dropping. In the last 3-4 years, the price had dropped by 70%; whilst the main players of the extremely expensive CSP technology were dropping out of the sector one by one.

In order to picture this in your mind, this is a glimpse of the parabolic trough technology. Here you can clearly see the CSP collectors.

Actually, CSP is a good technology and has areas of use. I had given the same brief to my business partner at the time. However, I just couldn’t convince him. I kept stressing this: it was important to focus on CSP’s correct working model which was using the main product of warmth. In order words, it was able to cover the need for heat in factories and integrate into the system they call the absorption chiller and control the heating and cooling of the building. However, you had to take the road of minimizing the CSP collectors in order to reduce the costs. This suggestion of mine was not accepted. In the end, I sold my shares in 2013 and left. I will explain in detail about my Hittite Solar expedition in an article in the future.

The transition from CSP to PV

When I was leaving CSP, I always had on my mind to get into PV. Assuming I was going to sell the CSP company, I established a PV company in 2012 and after the sale, it became active in 2013. Firstly, like all the players in the industry, we too began with unlicensed projects. The unlicensed projects were a good thing for the sector from one perspective. We were all able to take our first steps into the industry because of this. And as EkoRE, we were able to expand our portfolio to approximately 30MW, engage and put into use and sell.

When I was making all of this happen, with a new analysis I made, I started explaining to everyone that from 2014 onwards the fact that the whole production process from start to end was being completed in Turkey was very important from a strategic point of view. Beyond this conversation and exchange of ideas, I rolled up my sleeves and from 2015 onwards started to research. The results from the end of the research made it clear which technology we had to use to make this happen. Crystal technology was the correct technology. When compared to the thin film solar panels technology, the effectiveness and cost combination would always come on top as the clear option. When you look at the developments over the years, thin film solar panel technology never got close to crystal technology regarding these two criteria (cost and effectiveness), infact the gap between them grew much more apart. Of course, the technology was constantly being developed too. Then in order, polycrystalline, monocrystalline, PERC monocrystalline and finally heterojunction made it into the marketplace and started to be used. Production effectiveness and values continually increased with the development of technology. We then determined the technology and work model we will invest in and did our studies based on this. We will disclose the details of these studies in the future but in the meantime, we need for these to remain with us in order to enable healthy working progress.

The reasons we chose Nigde as our place of investment

Strategically, it was also very important where the production plants were located. After our research, we decided on Nigde. I believe Nigde is located in a province in Turkey where it doesn’t deserve to be. It has very big potential. After seeing this potential, we decided to make our investment there. I’d like to share with you the factors that helped us decided on this investment:

1. Nigde is located in the centre of Turkey’s Sun Belt

2. Its 2 hours away from the port of Mersin (for exportation purposes)

3. Planning of a new train station in the Bor Industrial Park, Nigde (it will have rail passing through)

4. Planning of an airport on the other side of the road to the Bor Industrial Park in Nigde where we will invest (Nigde-Aksaray Airport)

5. Planning of a gigantic 1000MW solar farm near the airport (the 2. piece of land for YEKA - Renewable Energy Resource Area)

6. All the authoritative powers including the governor, the Bor Council will offer their assistance at all times

7. A solar cell laboratory being built in the old Nigde University which has been renamed to Omer Halisemir University (established by ODTU University professors)

8. Nigde being a trustworthy and safe place

9. The community wanting an investment of this size

I believe that Nigde will become the centre of solar energy in Turkey during our investment period. By the way, we will be investing in the town of Bor in Nigde. Infact the famous saying “Geçti Bor’un pazarı, sür eşeği Niğde’ye’ (meaning ‘too little too late) came out of this region. The market in Bor is on Tuesdays and the market in Nigde (centre) is on Thursdays. Back in the days, it would take anyone going to Nigde from Bor 1.5 days. Bor is a big town and has a kind of harmless competition with Nigde. Nigde was relatively busier but because we saw potential in the Bor Industrial Park, we decided on there as our location. As a matter of fact, I can say the approach of the current Bor Mayor may have been a deciding factor in our choice.

From the formal start we made in 2016, we were unfortunately unable to source finance during our process due to the problems and difficulties the sector and country suffered. The effects came from the 15 July Coup, Referendum, State of Emergency and acts of terrorism. Infact there were investors that had signed their notice of intentions who had changed their minds overnight. Of course, we never gave up on our project. We continued to do the best we could.

Aiming to only have local solar panels throughout

We continued to stress the importance with the interested parties regarding production of the solar panels to take place from start to end in Turkey. With this I believe we also impacted the organised YEKA (Renewable Energy Resource Area) too. When we were setting up the YEKA tender, we provided the Energy Ministry with lots of technical information. We weren’t able to enter the first YEKA tender but if we were able to add value to it, it makes us just as happy. The things we were doing on the other side also got the attention of the Economic Ministry. The meetings began about 1.5 years ago. We completed all the things that they had requested from us. From what we heard, we were the first to apply for the “Project Based Initiative System” and actually have the right to be awarded.

We were told that the initiative launch would take place at the end of March. 18 years after I graduated, the Canadian University, McGill University recognised me and invited me to the entrepreneurship event, the Dobson Cup as a member of the jury and for mentoring. To receive an invite from one of Canada’s top universities was an absolute honour for me. However, as the dates clashed with the launch, I had to cancel the Canada event (flight, hotel booking etc). I was terribly upset about this situation but there was not much I could do. On this note, while I have mentioned my university in Canada, I thought I’d share with you the interview I had with the best education foundation in Canada, Edu Life.

I had made all the preparations require for the end of March launch. However, two days before the launch, we received a phone call from the Economic Ministry advising us that there was a change in the Presidents program and due to that, the launch had to be delayed till the month of April. They then called us on Friday, the 6th of April confirming that the event will now take place on Monday, the 9th of April.

We participated in the launch as a team. Below you can see a photo of us taken in front of the President’s Complex.

The program that started on Monday at 2pm continued to give out initiatives after the speeches. You can find the full program video below.

You can also find the official article regarding the event at this link https://www.tccb.gov.tr/anasayfa-haberleri/393/92094/icerik.html

You can find the other photos regarding the Project Based Initiative and Initiative Certificates below.

As a result, EkoRe was awarded a 2.2billion “Project Based Initiative” granted by the Turkish Republic’s President, the Prime Ministry and Economic Ministry. I had formally started the idea of producing the PV panel and its whole duration of production to be undertaken in Turkey just over 2 years ago. The project I named “100% local solar panels to become free from energy dependence” commenced in Bor, Nigde as planned and had started fruition. I would like to thank all those who helped and supported us from the bottom of my heart.

From now on, it is up to us to complete funding of the project and execute the construction this year. I can say that we have an aim from here onwards to take over the factory next year and start production.

I wish it to be of beneficent to the whole country.

NOTE: As we are only at the beginning of the journey, I haven’t officially posted a formal thank-you in this article. When we are ready to open the factory, I will write another article, and thank everyone one by one. FYI