Gender equality in word and in deed 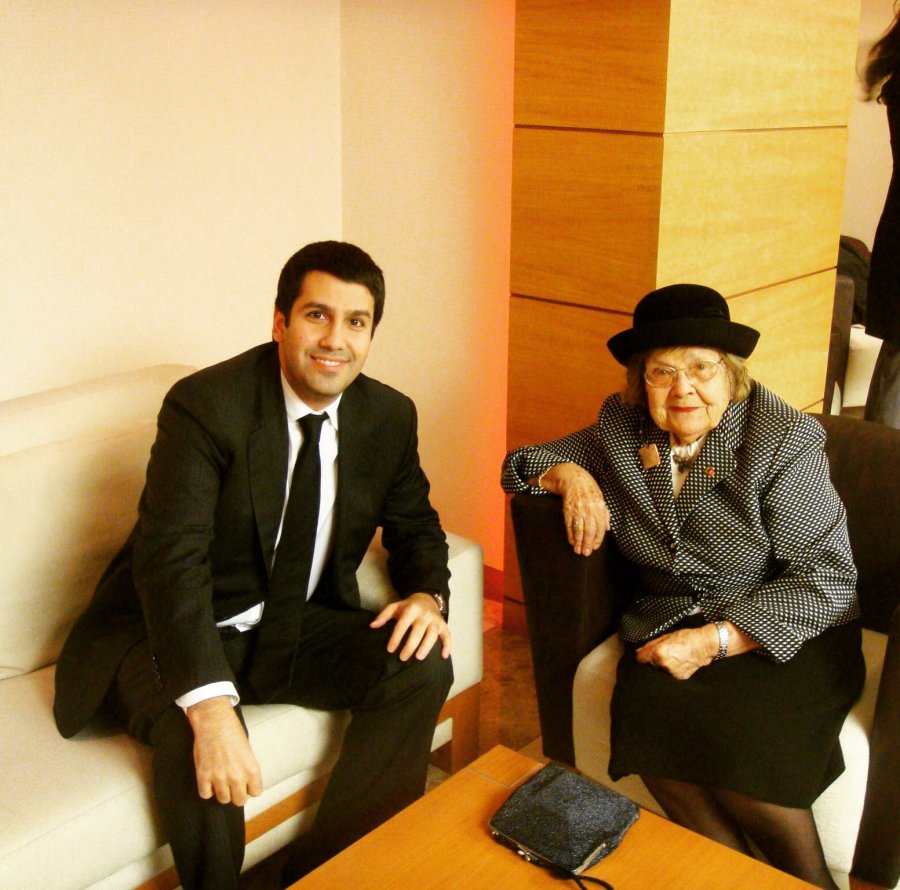 Years ago, a friend pointed out the difference between two Turkish words for “woman”: bayan and kadın.  While I feel it’s not entirely helpful to get hung up on terminology, I do know that women still have a long way to go in achieving full equality, from sports and business to family life. This week I’d like to share with you my take on “women’s equality,” including some of my personal experiences and the concrete steps I have taken to contribute to the cause.

One of the great things about social media is being able to contact and keep in touch with old – even very old – friends. I too communicate via Facebook, LinkedIn and Instagram with colleagues and friends from elementary, middle and high school, and university. It’s wonderful to be able to follow friends’ lives and to meet up occasionally and encourage each other.

About four or five years ago, an elementary school friend send a Facebook message. Although I hadn’t seen her since I was 11, she got straight to the point: 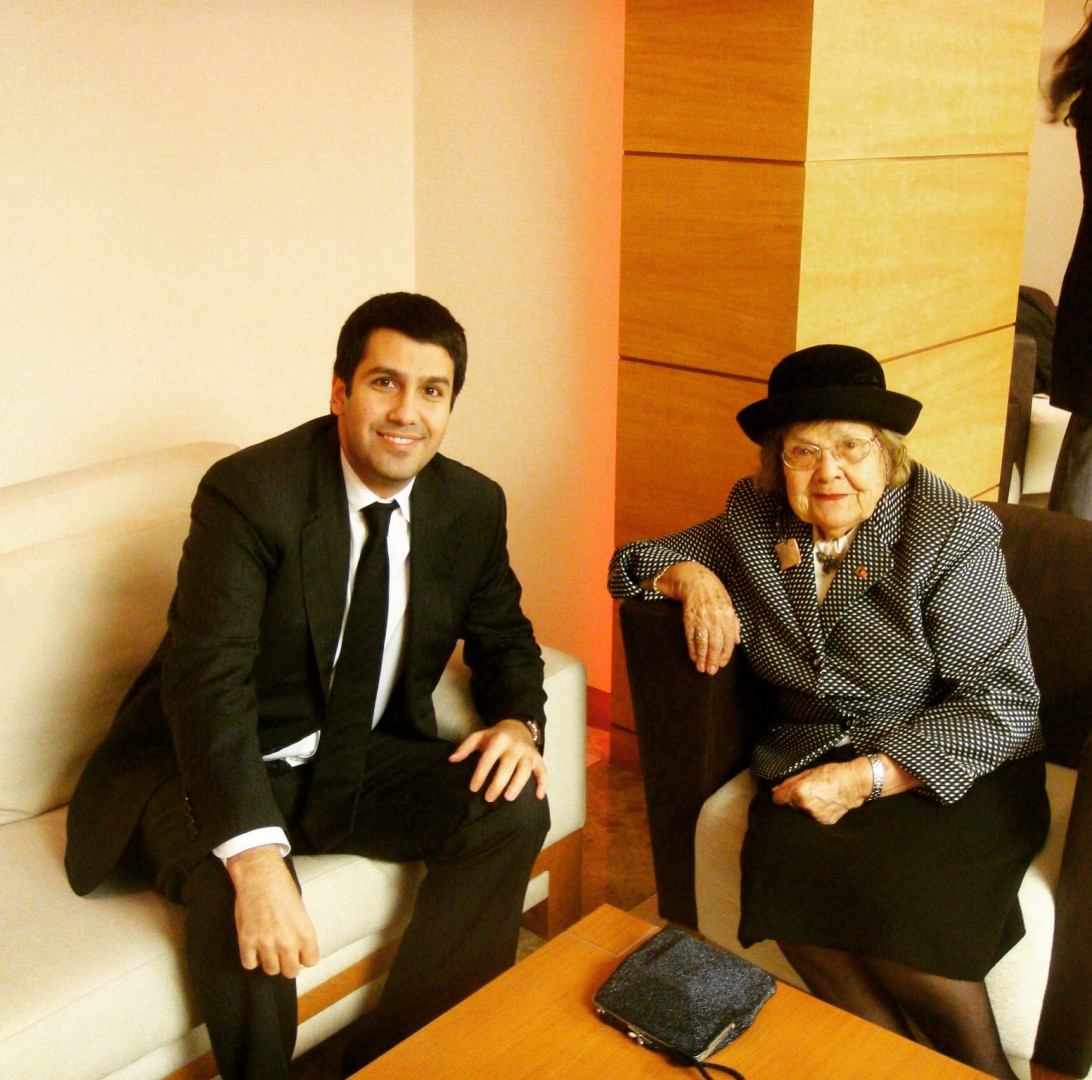 I was a little confused for two reasons. First, it seemed odd that someone I hadn’t seen since age 11, but who is a respected family friend, would use this tone in her first ever message to me. “I must have hit a nerve,” I said to myself. Secondly, this was the first I’d heard of a kadın/bayan issue. I couldn’t comprehend why the word bayan would be construed as an insult. I asked my friend the first question that popped into my head. (Naturally, we’re on a first name basis, but I’m protecting her privacy here.)

In my head, I searched for equivalents in other languages, and thought to myself: Well, let’s protest “he” and “she,” along with “Mr.” and “Mrs.,” in English, as well as “El” and “Ella” in Spanish. There are similar derivatives for man/woman in many other languages. In the end, I didn’t write anything because I didn’t want to upset my friend or drag out our chat.

The friend from elementary school must have been miffed, for she kept the chat short. We wished each other well as we ended things. I’ve never heard from her again.

What I’m writing here might anger some of the women I value, respect and feel great affection for. However, I’ve always told it like it is. I now try not to use bayan, but I also want to say that I find the debate surrounding the word to be superficial and unhelpful.

A vicious cycle of violence

I’ve always had an allergy to any emphasis on form over content, so will now move on to the real issue in this post, which is: Millions of women in Turkey are subjected to violence by the men in their lives. This is a problem that cuts across sociological lines, with apparently modern and highly educated men also inflicting violence on their wives, girlfriends and female family members. Every year, thousands of women are also sexually assaulted or even killed. Rather than decreasing, there has been an increase in such cases. But why?

The first reason is the lack of basic education in Turkey. This is, in a sense, a vicious cycle. Many mothers fail to teach their sons respect for women and, on the contrary, stoke their sons’ egos from a very young age. A boy brought up to believe he’s another Alain Delon, Brad Pitt, George Clooney or Alexander the Great is more likely to have issues with the opposite sex. The problems begin when he fails to receive the same level of interest from women that he received from his mother. He’s completely unequipped to handle rejection or a brush off from women, and can lash out. Sometimes this violence is supposedly triggered by “cheating” or “looking at another man.” I wrote about this at length last year in an article entitled, “Why can’t we prevent violence against women in Turkey?”: http://serhansuzer.com/en/why-has-turkey-been-unable-to-prevent-violence-against-women
Another cause is that children observe the relationships of their parents. A child whose role models suggest it is fine for women to be oppressed will grow up with the same view and replicate it in future relationships. It’s not only men. Women who grow up in this kind of unhealthy environment can also suffer serious consequences in their later relationships.

A lifetime of self-improvement

I’ve previously written about this repeatedly. The most important problem in Turkey is education, as I outlined in: http://serhansuzer.com/en/education-education-education-it-matters-most  As I explain in that article, the education of educators and parents is critical. Only informed parents who have received training can raise healthy new generations, while those unequipped to do so simply exacerbate the problem. This leads to an ill-fated and dark future for the future generations of our country.  In successive generations we have seen an erosion in values, a propensity for violence, a tendency to cut corners and a belief that hard work goes unrewarded. A people that have internalized these values does not have a bright future. I’d like to remind you here of one of my favorite sayings of Atatürk:

“A society that grows accustomed to a life of ease without working, learning or tiring itself is condemned to lose its dignity, then its freedom, and finally its future.”

Increasing awareness through education is critical. Sometimes we see that even highly educated people are lacking when it comes to interpersonal relationships. No matter one’s educational background, one must strive all through life at self-improvement.

It’s important to strike the right balance. In patriarchal societies, well-educated women may react by raising daughters that are overconfident. About six months ago I was chatting to a woman seated next to me on a plane. This intelligent and cultured woman in her sixties was unburdening herself to me about her daughter, whose husband, “a wonderful person” had confided to his mother-in-law that their marriage was on the rocks. The husband said he thought his mother-in-law had been overly successful in rearing a daughter with a sense of confidence.  He also grumbled about how difficult it is these days to bring up a daughter and get that balance right. I think both parents have a responsibility here, just as both partners have to work to ensure they have a healthy marriage. A relationship in which only one partner makes all the sacrifices is certain to fail.

One of the negative aspects of the modern age is the encouragement of hyper-competitiveness, even against the opposite sex. This pointless rivalry between the sexes, jockeying for superiority and attempts at domination prevents the establishment of a healthy relationship. I think men and women should complete each other, like Yin and Yang. A life shared is a life enjoyed together. Bickering and obsessing over minor slights have no place in a healthy relationship. Both parties need to give up some of their old habits, find common ground and work to complete each other. Otherwise, all the education in the world won’t guarantee a healthy relationship.

Women should be active in all social spheres. Women need to be able to do jobs traditionally associated with men. When women are present, men tend to be better behaved. Work environments are improved. I’d like to share a link to an article about the life story of woman who worked as an auto mechanic: http://www.hurriyet.com.tr/18-yasindaki-betul-oto-tamircisi-oldu-29507775

It’s amazing, isn’t it? I can also relate a couple of examples from my own life.

Sports with the opposite sex

I wrote previously about how me and my roommate Austin got a football tournament going back when I was attending Harvard Summer School:http://serhansuzer.com/en/ego-will-the-end-of-us. We were playing on a standard soccer field one day when I girl came up. Dressed in cleats, a t-shirt and shorts, she motioned from the sidelines that she’d like to play. The players all looked at me and Austin. We stopped the match and went up to her. “Can I play, too?” she asked. It was the first time in my like I’d met a girl who wanted to play football. I instinctively mumbled no, that we were having a rough match and she might get hurt. Austin took me to task:

I turned to the girl and asked which position she wanted to play. “I’m a midfielder,” she said. I asked if she realized how much running she’d have to do. “Yes,” she replied. “Don’t worry. Nobody runs more than me when we girls have a match.” I told her she’d be playing next to me on our team. We sent off one of our guys. I motioned to the Austin and a couple of the other guys that we should protect her. The game started. Naturally, she was a bit slower than the guys, but she had great technique. We screened her from the other team, which had toned their play down. In the end, it was a lot of fun and we won. I offered my congratulations and told her she was always welcome.

‘What kind of men are you!”

I was involved in another mixed-sex sports competition at 15, when I went to the Galatasaray Basketball School in Beyoğlu. I enrolled just for sport, and was improving my basic moves and fundamentals in basketball. After weeks of training our coach came and announced a surprise. The Galatasaray Women’s Basketball team then trooped in. I couldn’t believe it. The coach said we would play this pro team and that it would help in our development.

I played guard because I’m only 1.80m, and being ambidextrous and quick on my feet gave me an advantage. The match started. But I had a problem. I didn’t know how to guard against my opposite on the other team. The other guys were all taken aback as well. The women’s team made basket after basket, and were soon up 12-0. Half of those points came from the woman I was guarding. The coach called a time-out and roared at us:

“What kind of men are you! You should be ashamed. How could you let them run up 12 points? Haven’t I taught you how to play defense?” One of our guys asked how the coach could expect us to play close man-to-man defense. The coach told us to forget that our opponents were women and to play as though they were men. Nobody would misunderstand if we made close contact, he said.

We returned to the game motivated. I warned the guard on the other team to watch out and said I’d been told to play close defense. She told me to go for it. The match started. The tide turned in our favor, with basket after basket. We ended up winning. It was interesting experience.

It’s great that women play sports. I hope I’ll be able to do sports with my daughter one day. I know how much pleasure it will give me.

You’d be right to ask: “Okay, after all this pontificating on women what have you actually done for them?  Here you go: 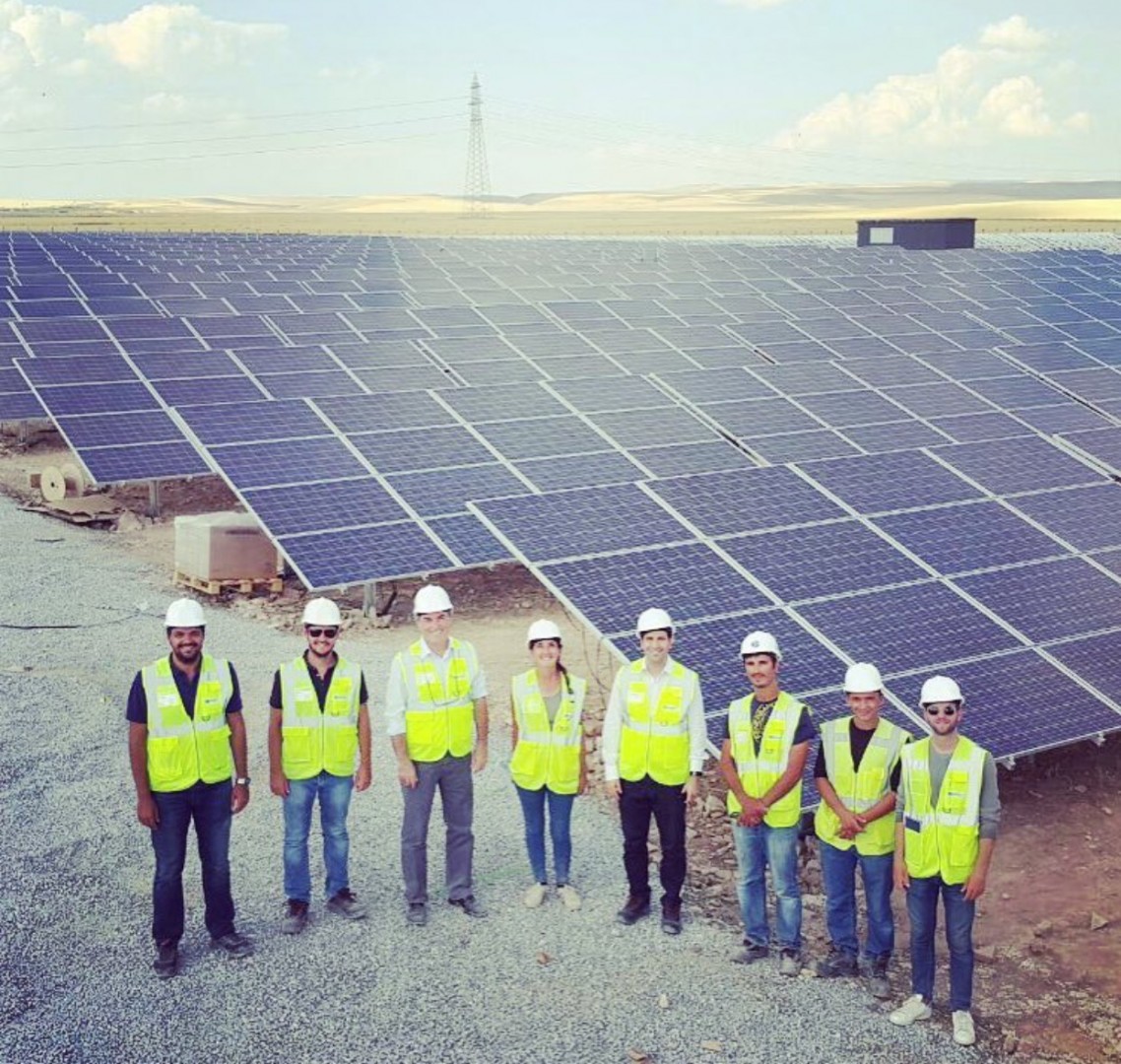 A photo I took yesterday of our Konya Kulu Solar Energy Plant project. You can see some of the young engineers who have joined our first interns, Berker and Alaaddin, from Istanbul Technical University. Melis, who normally works at a desk on technical drafts and such, puts in a great performance out in the field as well. From now on, we’ll take care to have a better gender balance in our internship program.

2. Treat all women and men fairly at work – respect and support human rights and nondiscrimination

3. Ensure the health, safety and well-being of all women and men workers

7. Measure and publicly report on progress to achieve gender equality 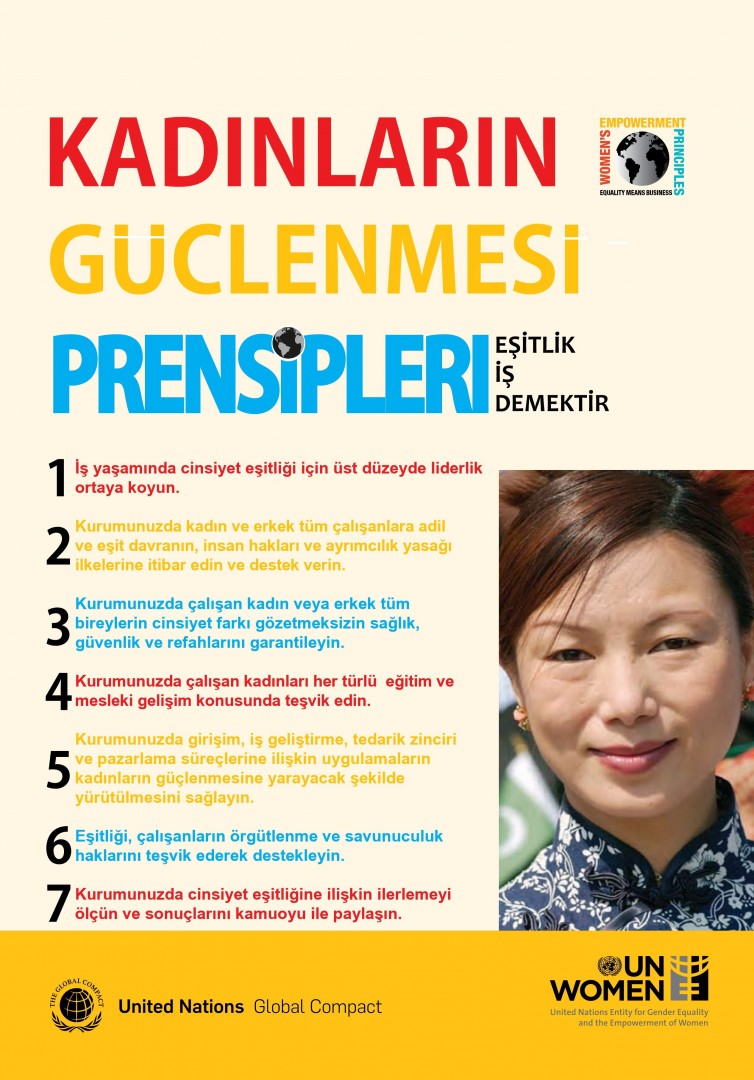 Last of all I want to address my fellow men:

Let me take the opportunity here to wish a long life to my father’s mother, who has played such an important part in my life and is central to my entire family. God bless her. 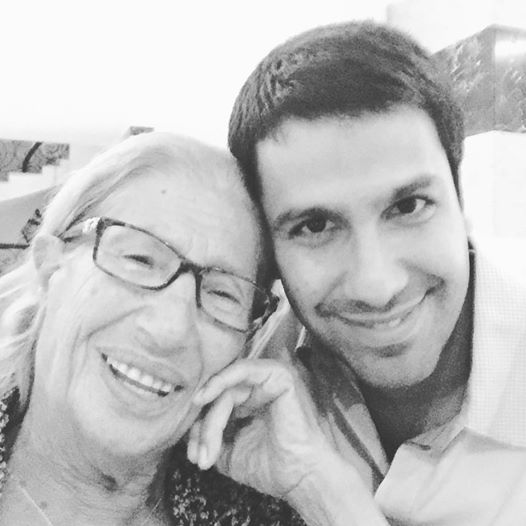