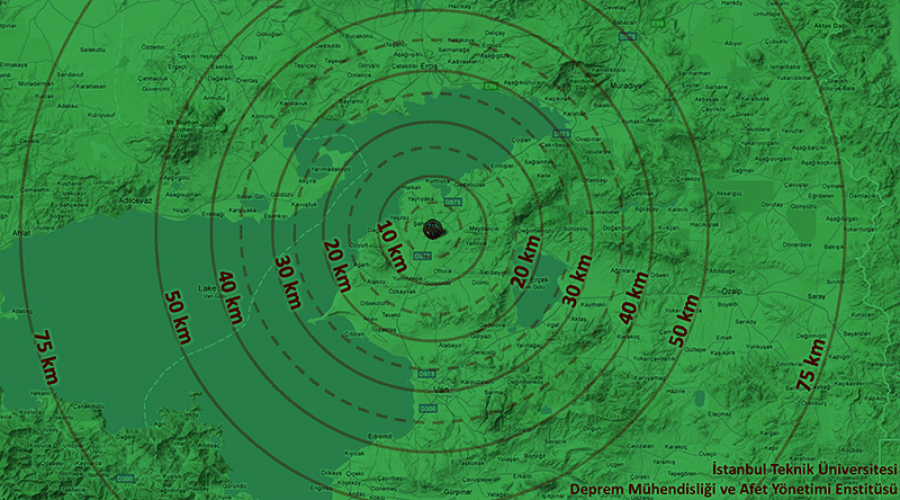 On October 23, 2011 our country was shocked with news of another big earthquake. Frankly speaking, what happened after this earthquake in Van didn’t surprise me at all.
Our generation’s first encounter with big earthquakes was the Gölcük earthquake in 1999. I was staying at my aunt’s on the day of the earthquake.​

I had graduated from the university two months ago, I was going to start working in America in September and I had come to Turkey for holiday in between. That night, I was staying at my aunt, whom I loved so much. I always joked around with her about her house in Ulus. Although I always said “If an earthquake happens in Istanbul, your apartment will fall right into the valley,” I stayed at her place that night. Not knowing anything about an earthquake, with a big shake at three o’ clock in the morning, I nearly woke up. I thought I was dreaming, until the chandelier of our upstairs neighbor fell down.

I jumped out of bed after a loud breaking sound and the first thing that came to my mind was to go to my aunt’s room. But believe me; the house was shaking so much that I couldn’t walk straight. I bumped into everywhere around and I hardly managed to go to her room.

She was staying in the same room with my little cousin Ali and when I went in, they were hugging each other. I said: “Come on, let’s get out!” They pulled themselves together and we went out immediately. The aftershocks, the Düzce earthquake that happened later and many other earthquakes exposed us to yet another reality of life: Turkey is a country of earthquakes. As a country, we had to learn how to live with it but unfortunately we somehow couldn’t do it. Even though some things improved, the same chaos, problems and troubles continue.

For example, an institution called AKUT came into our lives during those times. Today, AKUT became a symbolic name and besides it, many other search and rescue teams and public corporations worked in Van. To me, this is the only thing that we developed from past to present:

There are many search and rescue teams that respond right away. I had gone to the AKUT center after the Gölcük earthquake and had joined the rescue operations. With the officers working in

- Hi, I want to join the search and rescue operation as well.
- Do you know mountaineering?
- No.
- Do you know first aid?
- No, I don’t.
- Then you can help with the distribution of supplies.
- Of course, I’ll do whatever I can.

All of a sudden I found myself in a truck; distributing the supplies to the people who need them (interestingly, today I’m doing a similar thing with the Food Banking Institution). Later on, when I saw the people joining the search and rescue operations, I thought I could do more and I came back to Istanbul. I gathered our construction team (in the end, the people who know how to construct would know how to pick up the remains of it) and personally joined the search and rescue operations again.

Being in that psychology is, believe me, a very different thing. The despair of people, your effort to help them as much as you can, pain, sadness, grief, joy, fatalism, anger, adrenaline, fatigue… All these senses and emotions were intensively felt during those days.

I’m sure that the same feelings are present after the earthquake today and being someone who loves his country so much and who cares for the citizens, this situation truly upsets me. However, our hands are tied: You want to help, but there’s no proper coordination. Everyone is talking all at once. It was the same that day and it’s the same today as well.

Another unchanging problem is that the houses built by the contractors, who don’t know how to construct properly or who consciously steal from the materials to make a “profit” in their narrow minds, easily collapse. You can be sure that these people, just like it was in the past, won’t be punished (except the ones uncovered by the press).

After the Gölcük earthquake, The Turkish press announced a contractor as a symbol of fraud and similarly today, the press wrote about another contractor who built nondurable houses and who set up tents in his garden, although his house wasn’t damaged at all.

After the Gölcük earthquake, the whole country joined forces to help and similarly today, everyone did their best to send help to Van (I’m really proud of this characteristic of our country).

Couple of days after each earthquake, there were dozens of people saved and the search and rescue teams showed success each time. We cried for the ones that we couldn’t save.

Due to the respect to the victims of the earthquake, some entertainment programs were always canceled.

This goes on like this… In short, we can say that everything is almost the same since 1999 and I think this mentality won’t change easily. Because, to forget everything right away as a country is our characteristic. Van will be forgotten after a month. Slowly, those people will be left to their fate.
If you’re asking, “So, what should be done?” I will give the answer to it in my next article.