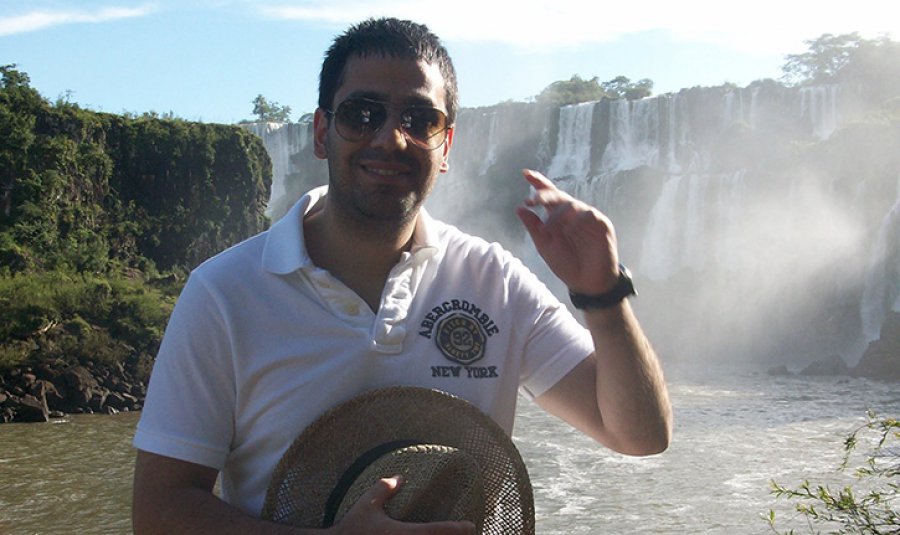 In this article, I want to talk about Argentina which I visited two years ago during Christmas vacation. My eyes kept wondering over the map as I was planning my vacation. I had been to Brasil and Colombia. As I was thinking about which country I could visit in South America, I decided that Argentina was the place I decided to see and started making my travel plans.​

I enjoyed the time I found last weekend to write after a long time while resting at home due to a mild cold. I wanted to spare my first article of the year to a pleasant topic. Although time has passed, I want to write about Argentina, where I went for New Year’s two years ago. I’ll try to tell about my trip to the magnificent country of the Tango dancers as much as I remember. I will talk about the city of Iguazu of Argentina in this article. In the next one, I will be writing about the capitol, Buenos Aires.

First of all, let me tell you how I chose Argentina as my destination. I had a very busy year; we had gone through the biggest expansion of all times in KFC and Pizza Hut Turkey. We opened 25 restaurants during the last 6 months. We had spent the first 6 months with reconstituting the company, making up its deficiencies, strengthening its foundation and with planning. After a year in which we worked day and night, I thought I finally deserved a good holiday. For this, we first decided to go to Tanzania at the recommendation of my friends. We made all the organization and two weeks before our trip, the travel agency told us: “We have to change the hotel you picked, it’s booked.” I was furious and I cancelled all the plans to go to Tanzania. The idea of getting vaccinated before going there didn’t sound nice to me as well. On the night I made this cancellation, I remember opening the world map and looking for a place to go to. I was always unwillingly looking at South America on the map. I had gone to Brazil and Colombia before. While looking at where I could go to in South America, I decided that I really wanted to see Argentina. So I decided to go to there and started organizing for the trip the next day.

Because there wasn’t a direct flight to Buenos Aires back then, I started my trip by flying to Sao Paolo (Brazil) from Istanbul. I can’t talk very positively about the Sao Paolo airport. It’s very chaotic over there. You have to try really hard to go to the right gate and not to miss your flight. We came to the international arrivals terminal and we were to go to the Iguazu city, which was on the Brazilian side, with a domestic flight. I remember that there was a problem with the screens and we could only find the right gate by asking it to at least 6-7 people. The most positive thing at the airport was that Brazil didn’t ask for a visa from Turkish citizens and that we could get to Brazil very quickly. Some of the citizens of the G-7 countries were waiting in lines and they were being subject to a lot of procedures like being asked for fingerprints. As a Turk, I can say that it was the first time I benefited from having a Turkish passport. I was proud in this sense.

We safely landed to Iguazu. Since our hotel was on the Argentinian side, we went to Iguazu Argentina (Puerto Iguazú) from Iguazu Brazil (Foz do Iguaçu) at midnight by taxi, crossing through the border gate, and checked in at our hotel at 3 a.m.

The next day, we went to the place where the waterfalls were at. Out of luck, the taxi driver Eduardo who took us there, a sympathetic typical Argentinian, told us about the Iguazu city and Argentina.

When we arrived at the waterfalls, he offered: “If you wish, I can show you three countries in one day.” We immediately accepted his offer and agreed on the next day. For those who are asking how it is possible to see three countries in one day, I would like to indicate that the Iguazu River, which is the source of the Iguazu Falls and which is 1.320 km long, forms the border of three countries. This river is formed by two different rivers (Irai and Atuba) uniting near the city Curitiba. At the last kilometers before falling into the Parana River, the Iguazu Falls are formed. At the border, there are three cities Puerto Iguazú in the Misiones State of Argentina, the city Foz do Iguaçu in the of Parana State of Brazil and the city Del Este of Paraguay. To see what I mean, take a look at the following picture: 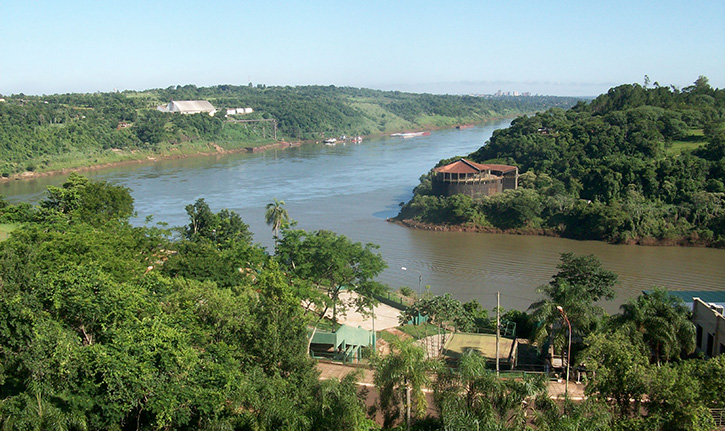 We arrived at the Iguazu Falls and I remember watching this magnificent natural event with great admiration.

You may find some pictures of Iguazu Falls at the Argentinian side below: 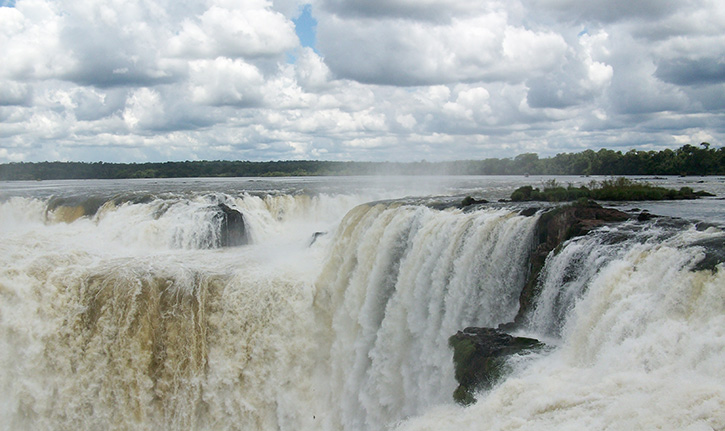 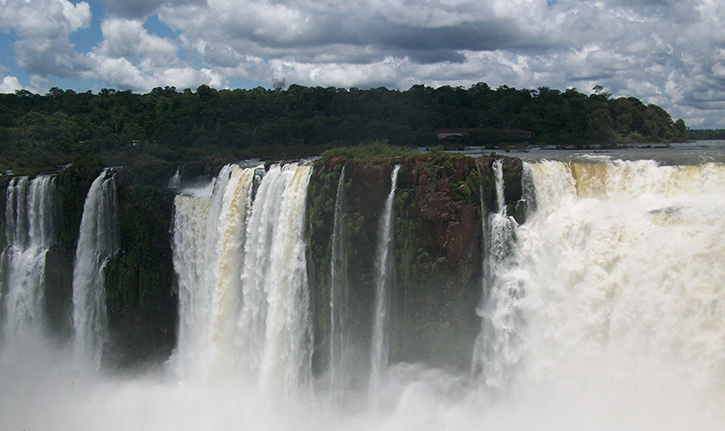 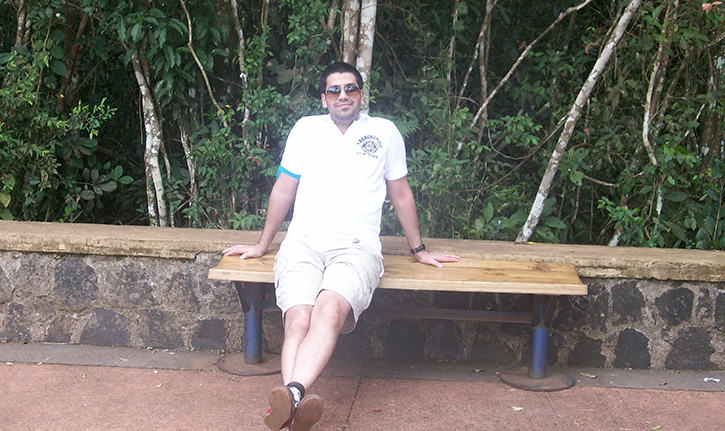 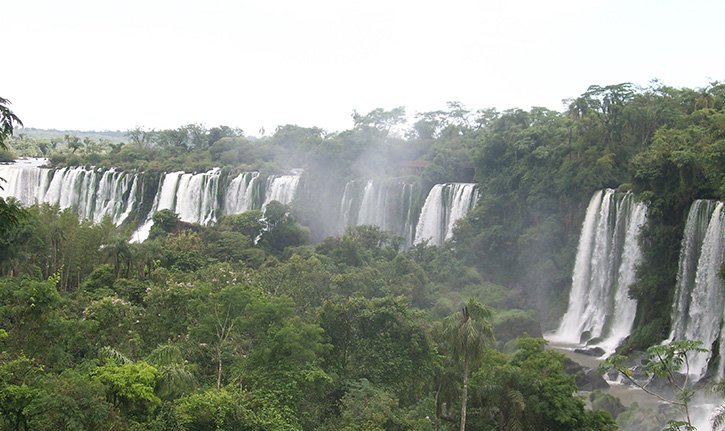 I want to share with you the video we taped, to give you a better idea about the grandeur of this magnificent waterfall:

At one point, we went close to the waterfall with a boat: 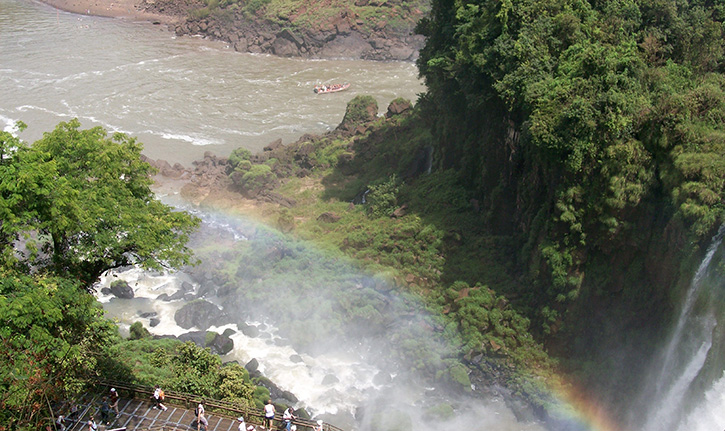 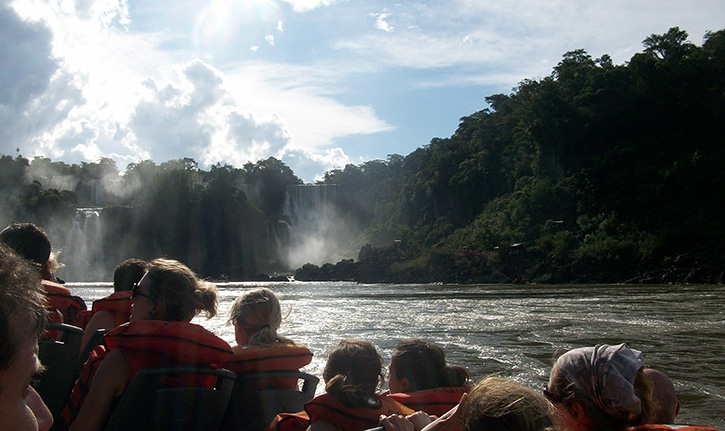 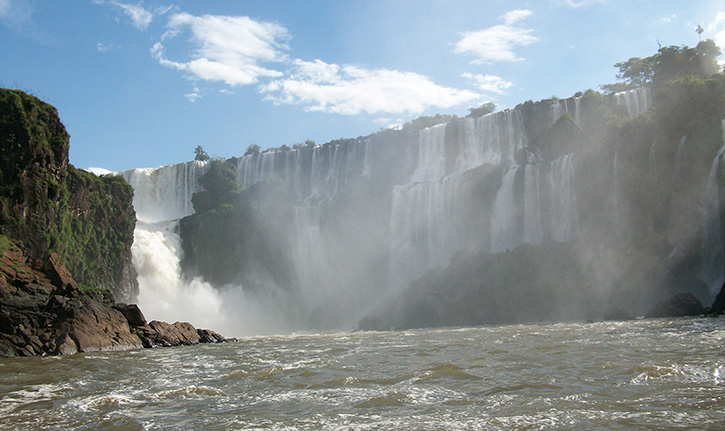 During the four years I was in Canada, I had gone to the Niagara Falls. The grandeur of Niagara had impressed me back then. However, after seeing the Iguazu Falls, I decided that the most grandiose waterfall I have seen was Iguazu. In fact, it won’t be incorrect to say that Iguazu Falls is the widest waterfall of the world. In the Iguazu Falls which is 2.700 m wide, water falls from 75 meters in two steps with an average flowrate of 1.700 m³/s. While the surface area of Niagara is 183.000 square meters, the surface area of Iguazu is 400.000 square meters. However, when you look at the yearly total, the experts say that more water falls at Niagara because of the climate of Canada. For me, Iguazu Falls are a natural feast that deeply affects you with its grandeur and shows you the power of nature. Speaking of natural beauties, I should say that different animals and plants that we Turks are not familiar with have a habitat here. 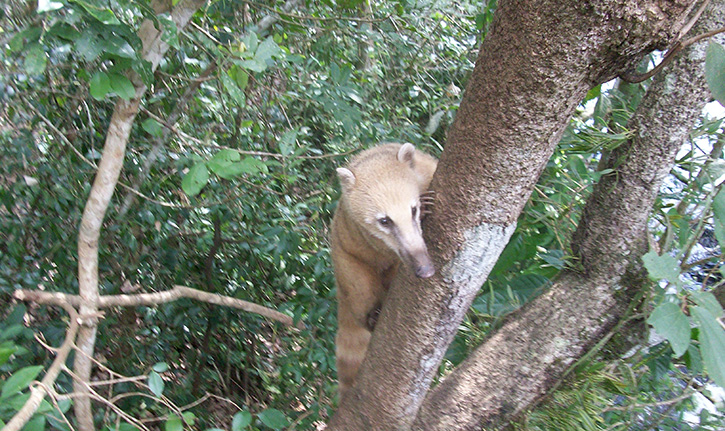 It’s possible to come across animals that you can’t see in Turkey in Latin America. Here’s an Argentinian raccoon. 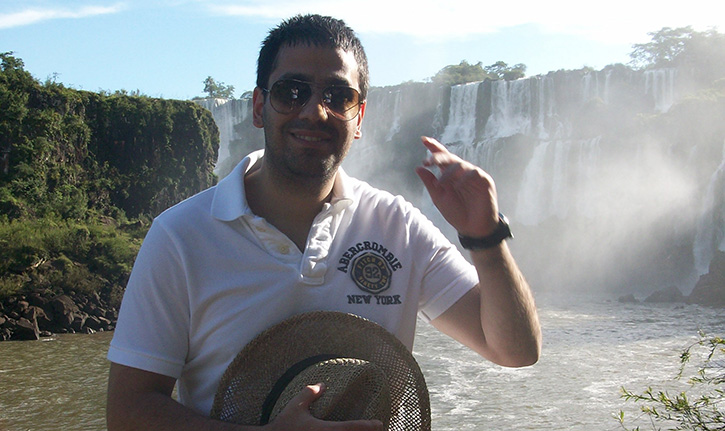 At the end of the waterfall tour.​

After the waterfall tour that lasted for the whole day and which was very pleasant, we came back to our hotel. The next day, we started our ‘3 countries in 1 day’ trip with a ferryboat that was close to our hotel.

Firstly, we went to Ciudad Del Este of Paraguay from Puerto Iguazú of Argentina where our hotel was. Frankly speaking, I was a bit disappointed about Paraguay. After seeing Argentina, the Paraguayan side seemed a bit underdeveloped to me. There are buildings similar to our shacks, there’s a serious disorganization and chaos going on. After walking around and shopping at the market at Del Este in which we stayed for about 2-3 hours, we headed for Brazil. 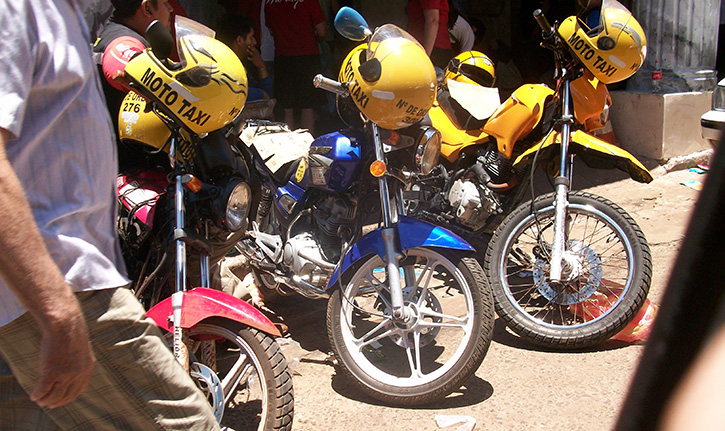 Motorbikes can serve as taxis on the Paraguayan side.​ 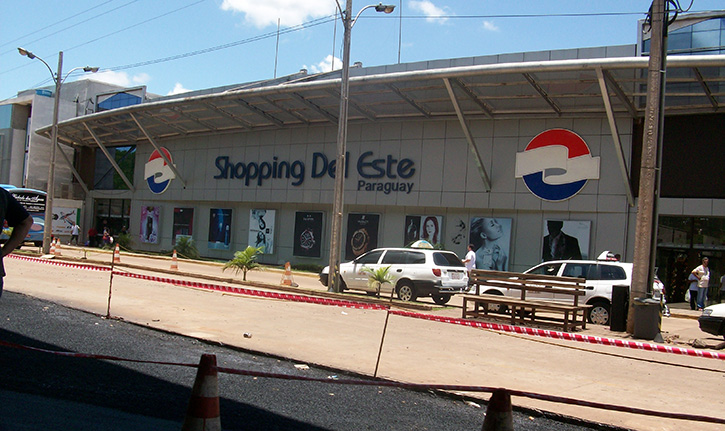 A shopping mall at Del Este​

As soon as you go into Brazil, you can feel that it’s the most developed country among the three. The first thing we did in Brazil was to find a good restaurant. I don’t know if you went to a Brazilian restaurant but they have great concepts with their open buffet and their meat. In some Brazilian restaurants they give you a card: One side of it is red and the other is green. If the green side of the card is on top, people carrying meat and chicken on a big shish come by your table and slice them vertically on the table if you want ask them to. With a pair of tongs, you take the meat that’s cut to your own plate. You can say that the Iguazu Falls at Brazil is similar to the one in Argentina. The difference is that the facilities in Brazil are newer and better. I can say that the waterfalls on the Argentinian side are more grandiose and the nature is more beautiful. Frankly speaking, the economic difference between the two countries immediately stands out because of the investments made on both sides. 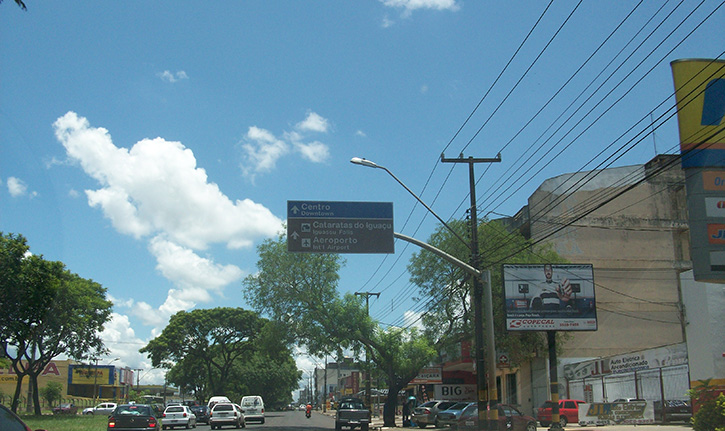 On the way in our car right after entering Brazil 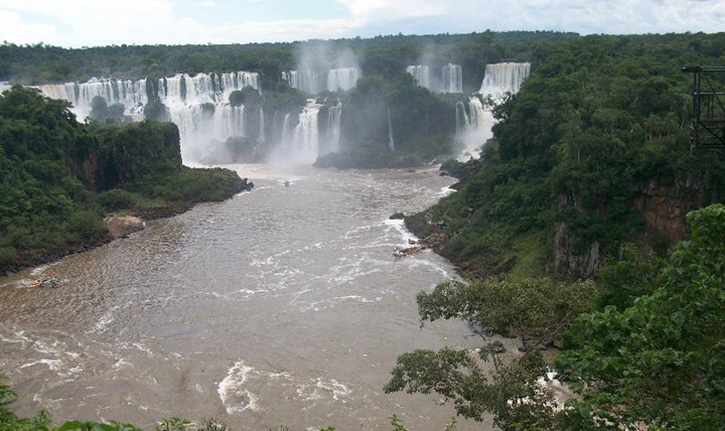 This is how we viewed the magnificent waterfalls at Argentina from the Brazilian side.

Of course, I should also indicate that the National Park involving both sides has been taken into UNESCO’s World Heritage list in 1984. After seeing the Brazilian side, we decided to swim in the pool of the boutique hotel in the park in our remaining 1-2 hours. The afternoon delight by the pool with drinks special to Brazil felt good. In fact, if we had time, the helicopter tour was a very tempting alternative for us. However, we decided to enjoy the pool because we didn’t have enough time. We collected ourselves, found Eduardo and headed for the Argentinian border. On the road, we stopped by the coconut sellers. They made a hole in the coconuts, put a straw in them and gave them to us as ice-cold drinks. After this enjoyable break, we passed the Argentinian border and arrived to our hotel. 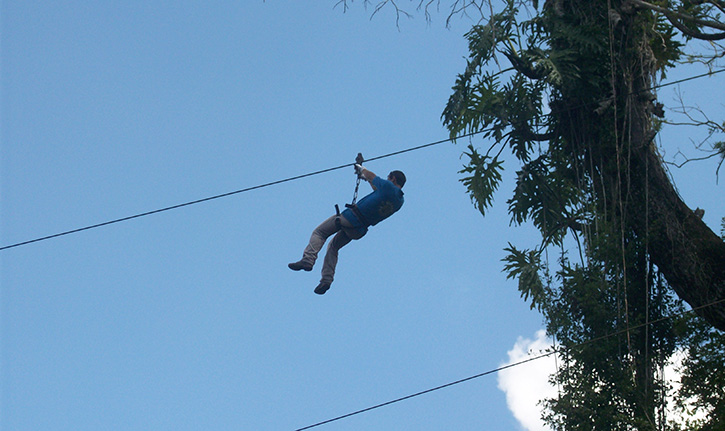 A picture from the bridge on the river that forms the Brazil-Argentina border.

One side of my body is at the Argentinian side, the other is at the Brazilian side.
In our last day at Iguazu, we went for an Iguazu tour because I wanted a little action. In this tour, we did Kanopi (Kanopi basically is to slide, like Tarzan, on a steel rope stretched between two trees usually over a rift or over a very high place) and also went down the waterfall with a rope. 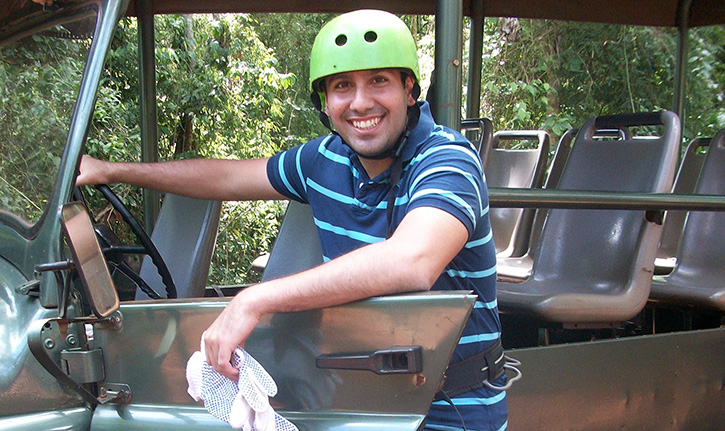 The picture taken from below while doing Kanopi​ 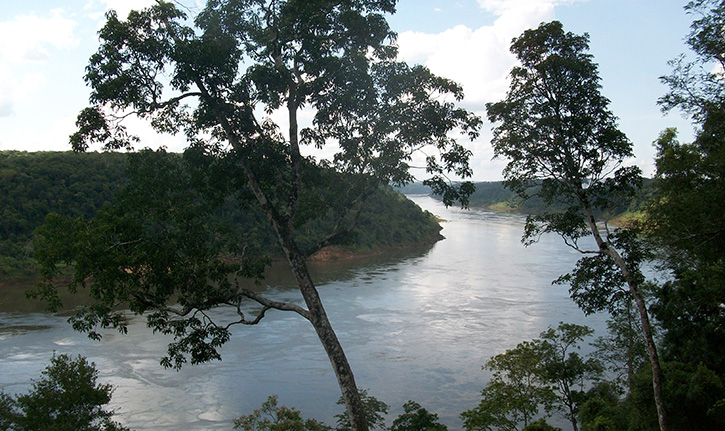 While we are preparing for Kanopi​

A great view of Iguazu River which we photographed while walking on the way down from the waterfall.

Below, you can watch my videos doing Kanopi and going down the waterfall. It was great adrenaline for us.

The Video of Going down the Waterfall with a Rope

At the end of a tiring day full of action, on our last day at Iguazu, I remember eating at a fine Argentinian restaurant with live music. The most important characteristic of Latin Americans in such places with live music is that they accompany the music and can truly have fun. The restaurant’s food was very delicious (I’ll talk about the culture of meat in Argentina in my following article) and the customers, in couples, were dancing with the Argentinian music which sounded very nice. After this pleasant night, we headed for Buenos Aires the next morning…