The fires in Australia call the world to duty 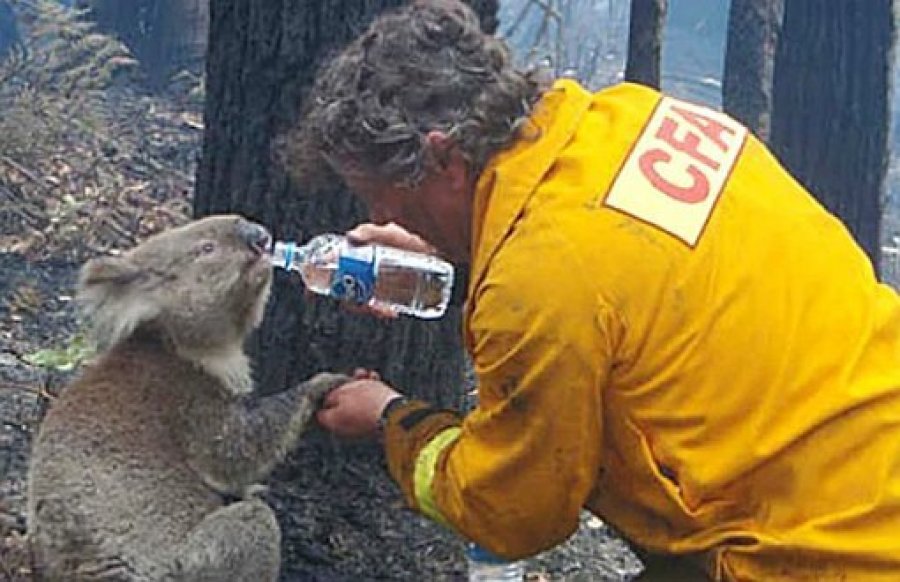 This is a subject I wanted to write about for a long time. I can’t remain indifferent anymore. Everything that is happening is out in the open. We all experience the effects of climate change differently in different geographies. If there are still those who argue that there is no climate change, they either hold their interests above everything else (which is a lot of these types), their IQ levels are significantly low, or they hit the bottom of the barrel of ignorance.

While I was making a presentation about Costa Rica recently, I explained how I decided to enter renewable energy in the 90s. Actually, I started this business because I am an environmentalist. To top it off, I have been skiing since I was about 5 years old, therefore I know the quality of snow from a very young age and the precipitation has been decreasing constantly. In other words, I have been researching what I can do with this consciousness since the 90's. Here is a video about the decline in the popularity of ski resorts. In this video, it states the situation analysis that I analysed in the 90s, that is, that climate change has reduced the quality of snow. It states that this is one of the reasons that has reduced the demand for skiing:

After finding the most effective way to combat climate change is by renewable energy, this business turned into a passion for me. After leaving the family company, I was able to enter the solar energy industry in December 2011. In fact, I have been making suggestions about solar energy both to the family business and to my immediate environment since the early 2000s.

Another most effective way to combat climate change, such as renewable energy, is afforestation. On this occasion, I commemorate the founder of TEMA Foundation, namely Toprak Dede, Mr Hayrettin Karaca. May his soul be rested in light. 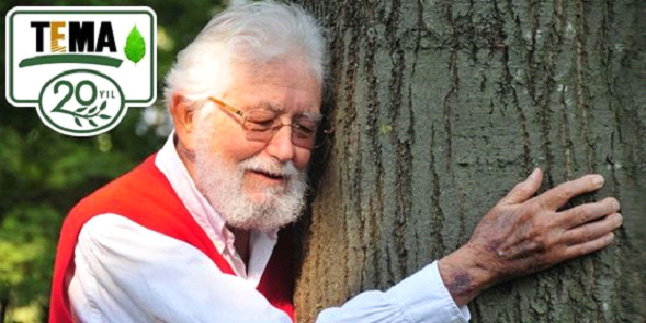 This is everyone’s fault

The climate change problem I identified in the 90's turned into a nightmare after 25-30 years, having entered into 2020. This nightmare is seen by different people in different geographies. The problem is that this nightmare is going to get worse. Because, despite the fact that a serious group of people have taken action, the vast majority still does nothing about it. Some even put barriers in front of the structural changes that need to be made. The crime here belongs to everyone. The private sector, which does not focus on technology development enough, continues to finance fossil fuel projects and does not support renewable energy companies sufficiently, and are those selfish institutes like financial institutions, governments, the state governments and individuals. This crime is committed by all of them.

Here is an example of those who set barriers: Australia's Prime Minister, Mr Morrison. Preventing the fossil fuel industry as an energy source rather than using it as a raw material, Morrison received an incredible reaction because he went on vacation when the disasters started.  Australia's Prime Minister has been subjected to serious reactions by his people since the fires which have not stopped since September. Here are some reactions shown to Prime Minister Morrison in this video:

I hope that they have learnt enough lessons from these events, and the least they can do is to ensure that fossil fuels are used only as raw materials. There is a lot to be said about the fires in Australia. You can get a glimpse just by looking at the pictures below about this disaster where words are exhausted: 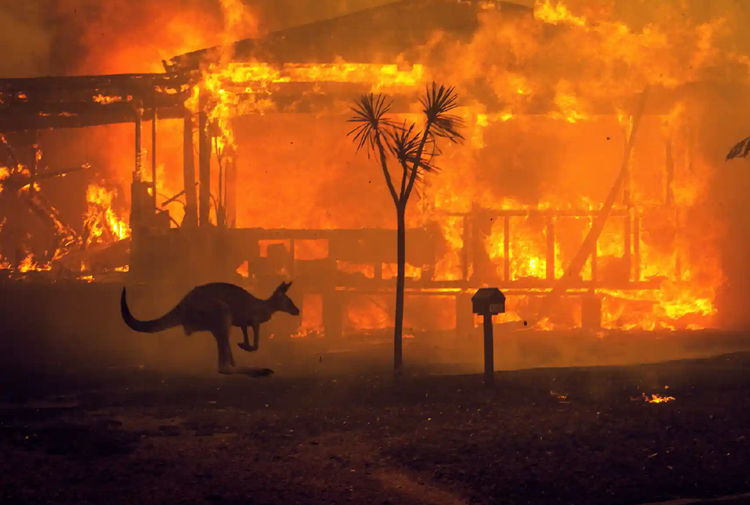 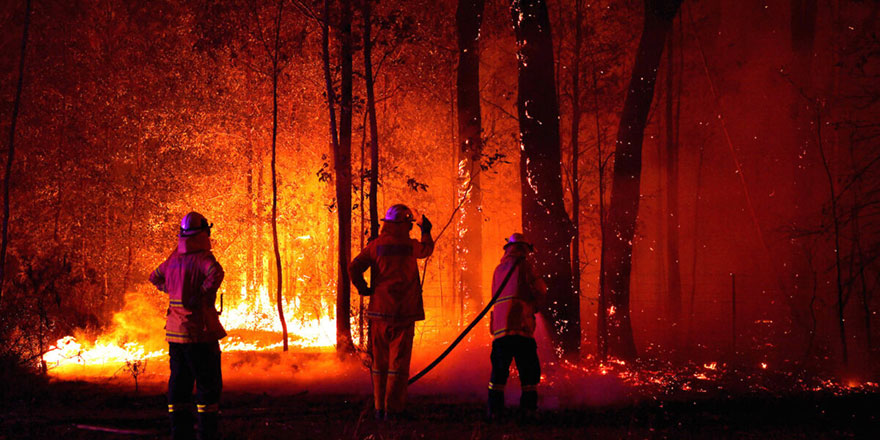 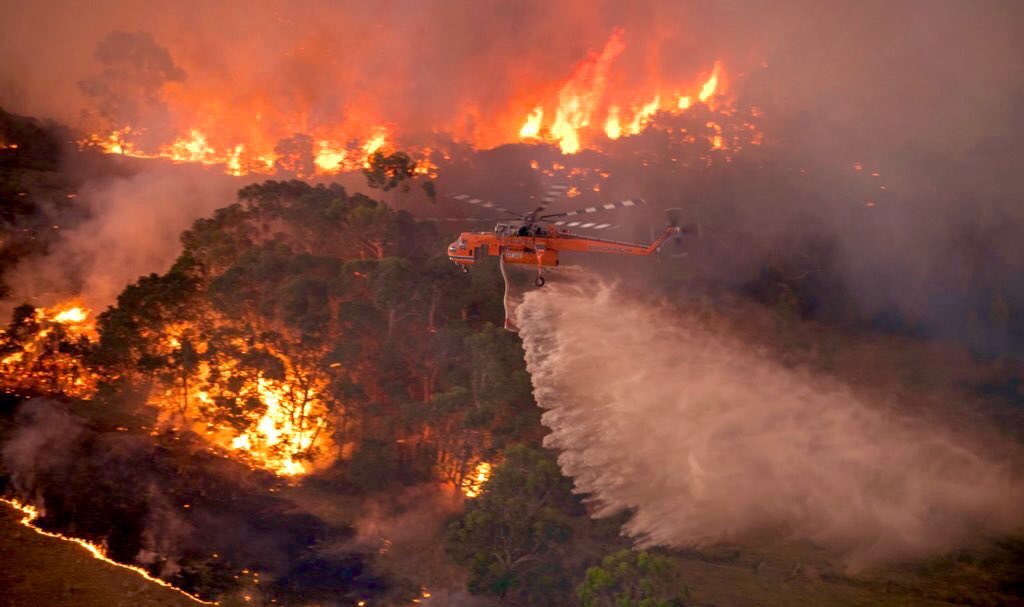 Information gained from our friendly NGOs in Australia

I asked some of my friends for support in order to examine this issue in more depth.

I contacted Briana, CEO of Food Bank Australia, the umbrella organisation of the food banks there, (https://www.foodbank.org.au) and the equivalent of our TIDER in Australia and asked her for information about the fires in the country. I share with you below the summary of information sent by Briana, the top manager of this aid organisation, which provides basic needs such as food, cleaning products and clothes for those in need. Here's what's happening in Australia right from its source:

“Most of the Australian Food Banking team, including myself, are now in our 8th day of work, working 15-hour days. We have to work very quickly in a stressful environment. I have never been so proud of our team and food bank. The situation is still very bad, but I wanted to inform you about what we've done so far.

FOOD BANK FIELD ACTIVITIES (you can see just how critical the role of food banks play in these emergencies):

What kind of work the Food Bank did in the last 7 days: 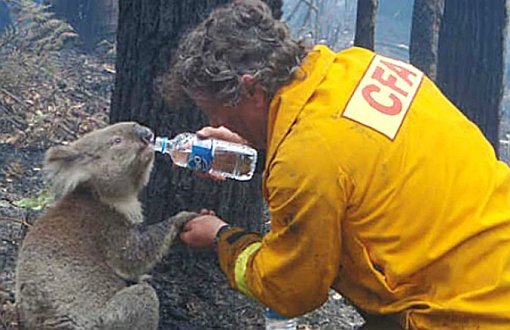 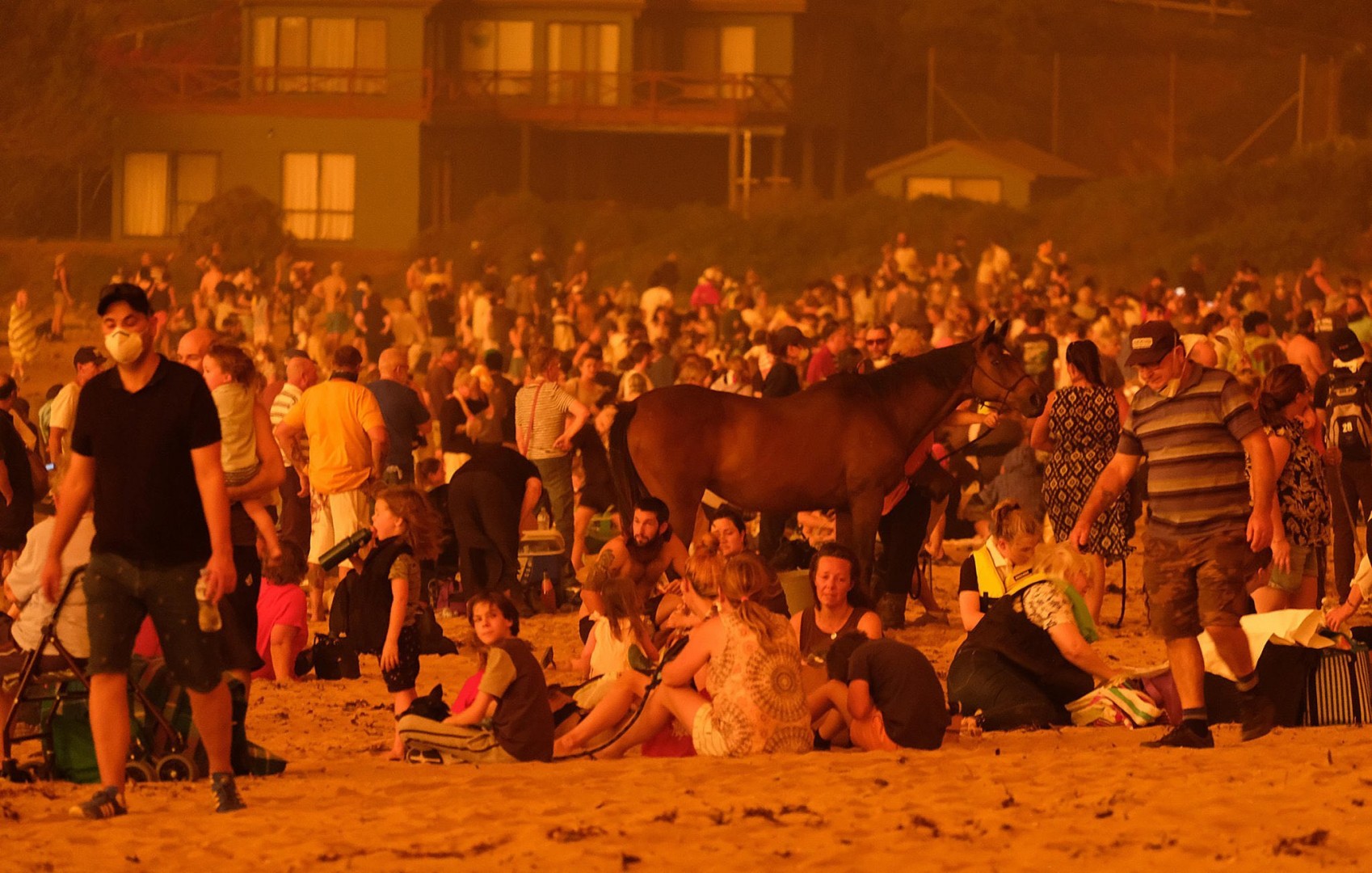 THE SITUATION AS OF 6AM TODAY:

1 urgent fire in Victoria, 13 fires in motion and on the move.

2131 houses are completely destroyed in NSW. 7 regions are isolated in Victoria.

6,284 farm animals were either killed or put to sleep in NSW.

More fires are expected in Victoria and NSW for tomorrow. This shows that other fires can potentially start.

Air quality is very poor in many places, including large cities.

Donations are coming in from everywhere. We collect donations from everywhere, both nationally and internationally. Support messages from social media accounts are growing like avalanches. We have turned the Food Bank into an association where people can come and discuss the situation about the uncontrollable fires. We were one of the 4 associations supported by celebrities (the other three NGOs beside us are: The Red Cross, local fire services and animal/wildlife NGOs).

I thank Dear Briana for this valuable feedback, congratulate her for her leadership in difficult times, and congratulate the Food Bank Australia team for all their valuable work. This is the power of a civil society!

The real reason is climate crisis

This is the view of Briana's work from a charity angle. To summarise the general situation; In Australia, forest fires often occur every year as a result of continental ecology. However, the climate crisis is the main reason why these uncontrollable fires occurring in Australia start periodically, take longer, live more and more, and have unpredictable consequences.

Due to these fires causing great destruction in the country, Greenpeace once again calls on Prime Minister Scott Morrison to take climate change seriously and take urgent action to reduce greenhouse gas emissions, which has been increasing for the past 4 years. Beyond Australia, this is a call to the world, to all the governments. Climate crisis has no borders, no country. This crisis affects us all. 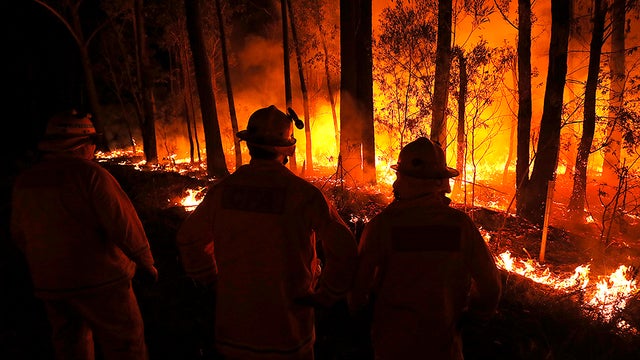 I personally want to address the government that manages Australia: Fulfil the requirements of the energy revolution. In other words, encourage the energy needs to be met with 100% renewable energy, the use of fossil fuels as raw materials (such as the use of oil in petrochemicals, natural gas in fertilizer production), energy efficiency and distributed systems. Also speed up reforestation (plant more quickly instead of burning vegetation), support R&D studies for the development of sustainability technologies and plan your proactive plans in the next season to avoid similar fires or quickly respond after they happen.

At this point, let's evaluate the subject in terms of meteorology and also include the views of the expert of the subject, Deniz Demirhan, an ITU Meteorological Engineering Faculty Member:

“It was determined that 2019 was the second hottest year of the last 140 years worldwide. It is thought that the increase in temperature in Australia caused the humidity (relative humidity) to fall below 20% in 2019 and caused the trees and shrubs to dry too much, and with the effect of strong wind, these conditions were estimated to make the environment favourable to fire. The beginning of the fire may have been from an electric current caused by lightning or a spark caused by sabotage. After a fire starts, it creates its own weather conditions. As hot fumes rise, pyrocumulonimbus clouds form. The air in these clouds cool at higher levels, the moisture in it condenses and the air begins to collapse. When the collapsed air meets hot air on the ground, it loses its moisture. This dry air moving from the cloud to the ground causes the fire to spread. According to NASA's statement, the number of Pyronocumulus clouds formed in Australia between 28-31 December 2019 is at least 20. These clouds carried the fire particles up to 16 km stratosphere as of January. This is thought to be the reason why the fire in Australia continued for a long time. It is calculated that the negative consequences of the fire will be effective all over the world. However, the results are not yet known. But if we make a speculation, it is possible that particles reaching the lower stratosphere (about 16 km) in large-scale fires can cause this region to overheat. In addition, it is one of the possibilities that the particles coming out of the fire prevent the radiation coming from the sun, just like the particles emitted into the atmosphere after volcanic eruptions, causing the environment to cool. According to NASA's explanations, whether this fire will cause a clear cooling or heating is under investigation.”

I would like to thank Deniz for their valuable views. An expert opinion is always very valuable to me.

To sum up the article, I can say the following:

According to the latest report of the International Climate Change Panel, which operates as an organization of the United Nations and has published thousands of scientific studies and reports on climate change, it is predicted that the average global temperature increases will be 1.5 to 2-3 C higher by 2050, in comparison to the 1850-1900 period.

Due to climate change, the normal order of precipitation has deteriorated. While the intensity of precipitation increases in the rainy months, this brings along disasters such as flood, landslide and erosion.

If the government and companies do not implement their greenhouse gas emission reduction policies, temperatures may increase by 4 degrees in the current century. The immediate implementation of the Paris Climate Convention is not a necessity but compulsory. I would like to remind you that states that do not behave seriously in these matters fall under heavy responsibility.

You can also donate to one of the links below if you want to support Australia to heal its wounds:

The climate crisis is now affecting our lives far beyond the findings found in scientific reports. I have always said; we have to act as part of nature. When we do things that disrupt the natural balance, nature first takes care of it, then starts to retaliate and it will finally bring the end to humanity (I'm talking about the end of the human species like dinosaurs, not the Earth).

Nature is currently giving humanity a nice slap. We can observe the effects of climate change all over the world. For example, in total, more than 7.3 million hectares (17.9 million acres) of forest burned in six states of Australia. This is a larger area than the sum of Belgium and Denmark. Animals were affected by this just as much as humans.

In other words, not only us, but also other living creatures on earth, are responsible for our irresponsibility as human beings. Speaking for myself, I will continue to do my best to leave a world without climate change worries to future generations despite all the difficulties I have experienced.

Friends in Australia, you are not alone. This world will do what we need to with our common will.