Memorable moments from the Istanbul Marathon 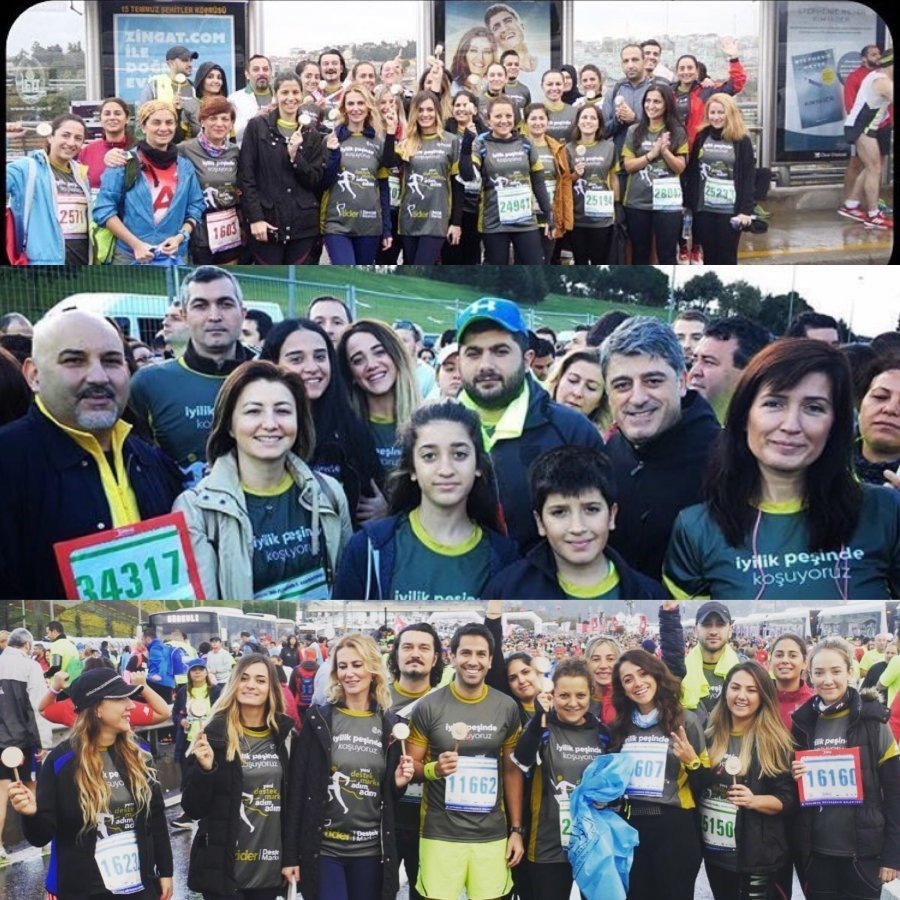 Last Sunday we got to run as a team in the Istanbul Marathon. As you’ll know, this was part of our campaign for the new Support Market we plan to open with your support in Bağcılar-Esenler, a district home to some 100,000 people in need. So here are a few of the many memorable moments we members and supporters of TİDER (the Basic Needs Association) enjoyed during the run...

I’d arranged with a group of friends to meet at the Starbucks next to The Marmara hotel in Taksim Square at 7 a.m. on Sunday November 13th, the morning of the Istanbul Marathon. It was raining like crazy first thing in the morning. When I arrived a few minutes after 7.00, Yasemin (from the group) was already waiting outside Starbucks. The others soon began to show up in dribs and drabs. These later arrivals then joined the line to get coffee inside Starbucks. And it was a serious line. After waiting for them for 10 minutes, I thought I’d check out the pickup point in front of the Atatürk Cultural Center where municipality buses left for the start of the marathon. Just about every bus in Istanbul was in service that Sunday morning. But still I couldn’t believe my eyes. The line for the marathon buses was getting longer by the minute. I immediately told one of my friends who didn’t have coffee that we should join the bus line right away or we’d be late. ‘The others can come along when they’ve got their coffee,’ I added. We eventually found the end of the line somewhere off the square in Gümüşsuyu. I reckon the line must have run all the way down to Dolmabahçe soon after we joined it. So we called the other guys who were getting coffee and told them to get their skates on. They showed up 10 minutes later. I could tell from their faces that they were panicking, so I gave them a hard time (half in jest, of course):

After waiting in line for over half an hour, we finally managed to get on a bus at around 8 a.m. You can see us just beforehand in the picture below. (From right to left: Nilüfer, Nigar, Özlem, Yasemin and me.) 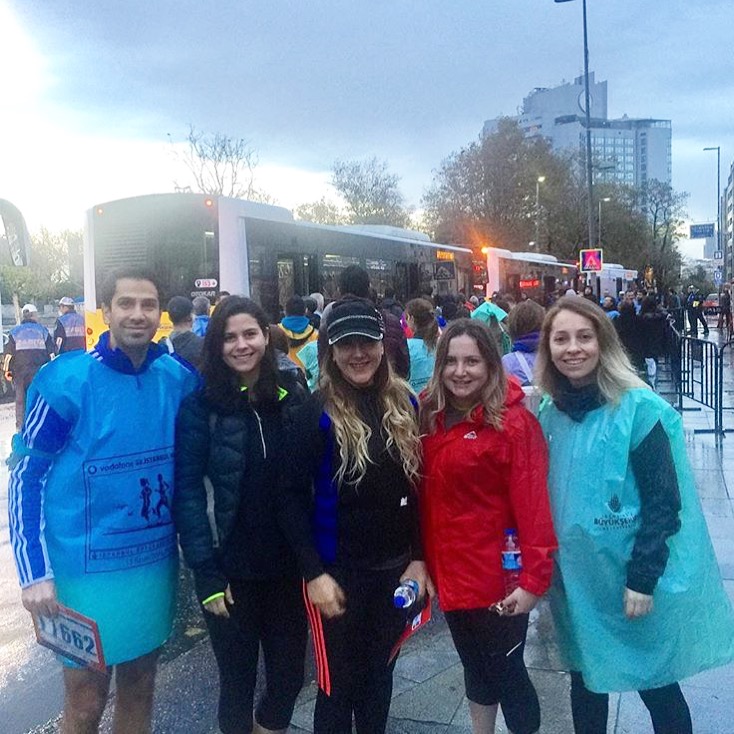 Within 15 minutes the bus had delivered us to the general starting area of the marathon. We immediately made our way to the starting point for 10 km runners and finishing line for 15 km runners, as instructed by the Adım Adım (Step by Step) platform. Our group was kind of all over the place, so we tried to get ourselves together in one place. A bunch of TİDER supporters and association colleagues were waiting by the Metrobus stop. Having got ourselves organized, we started taking group photos. 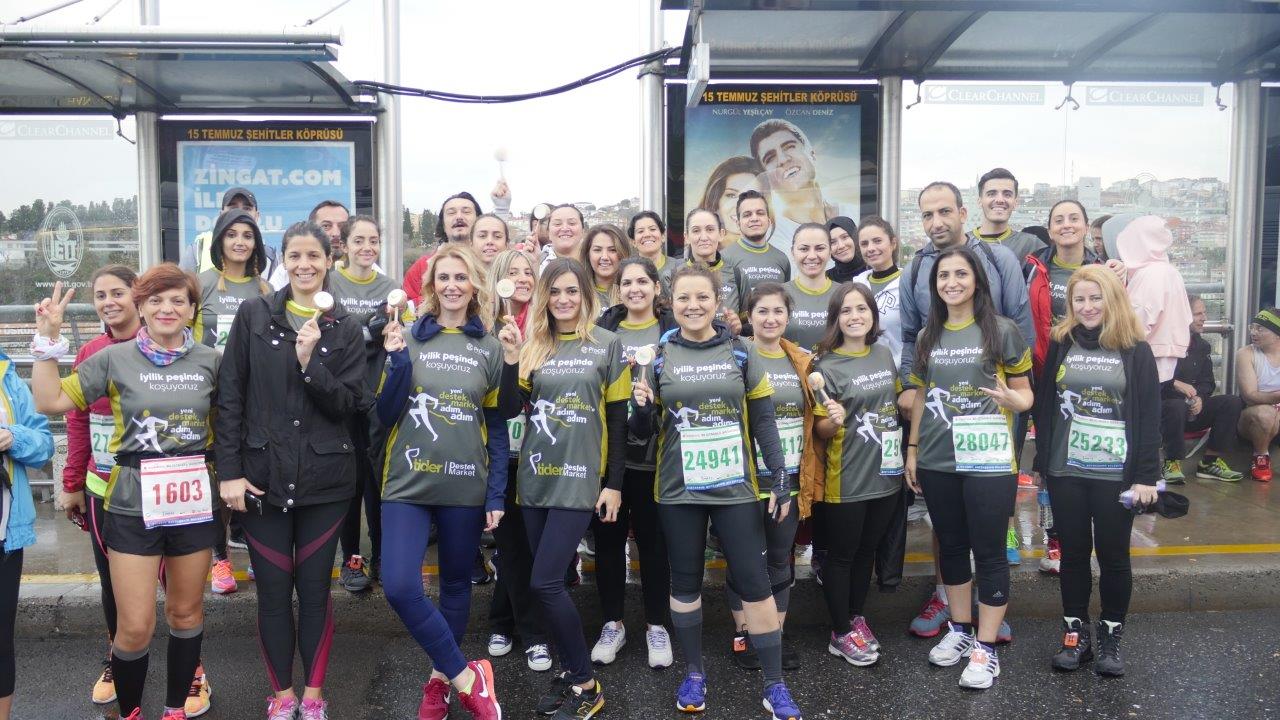 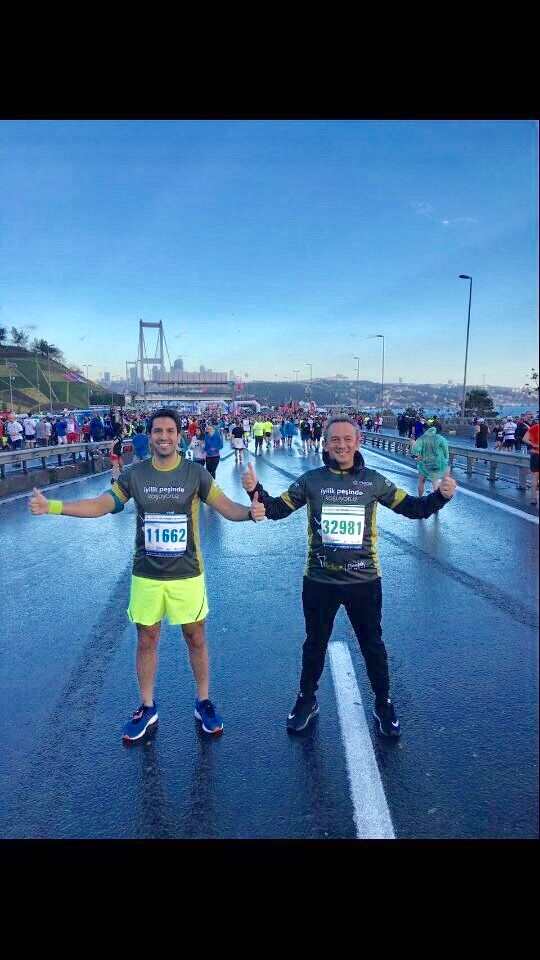 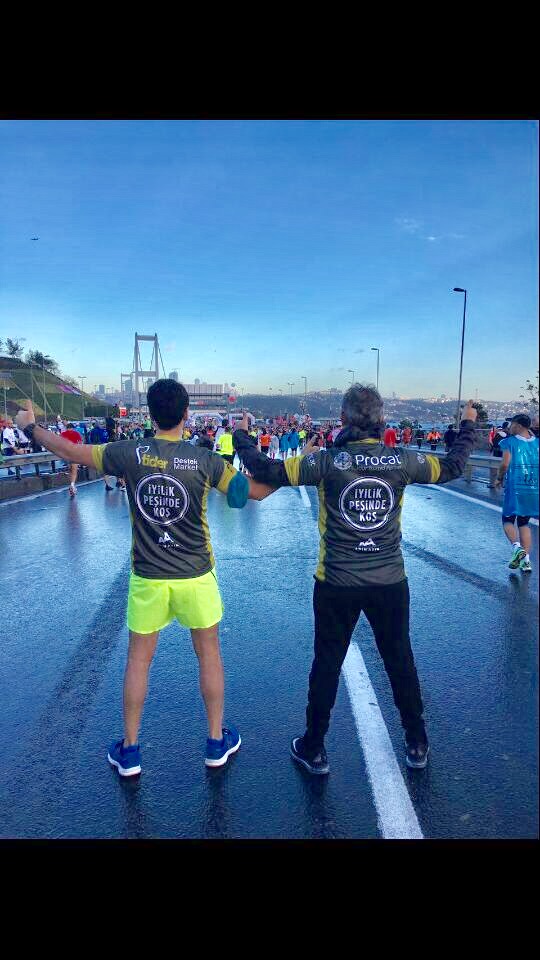 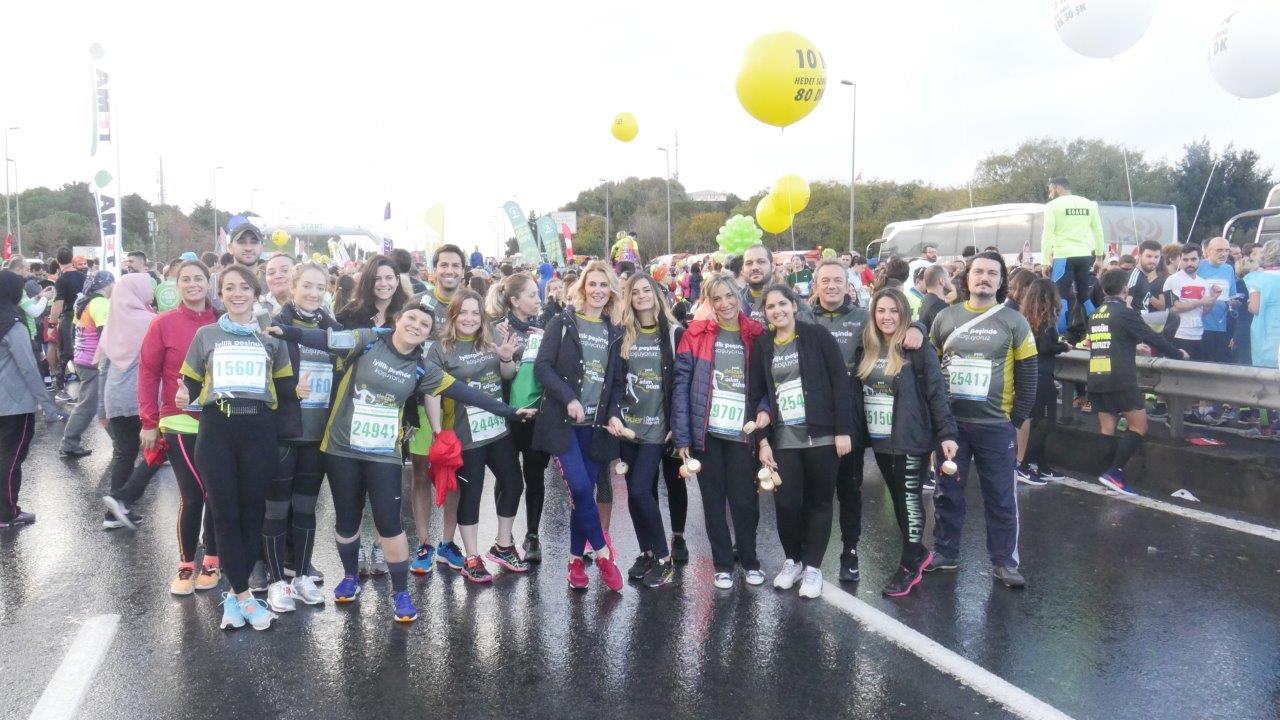 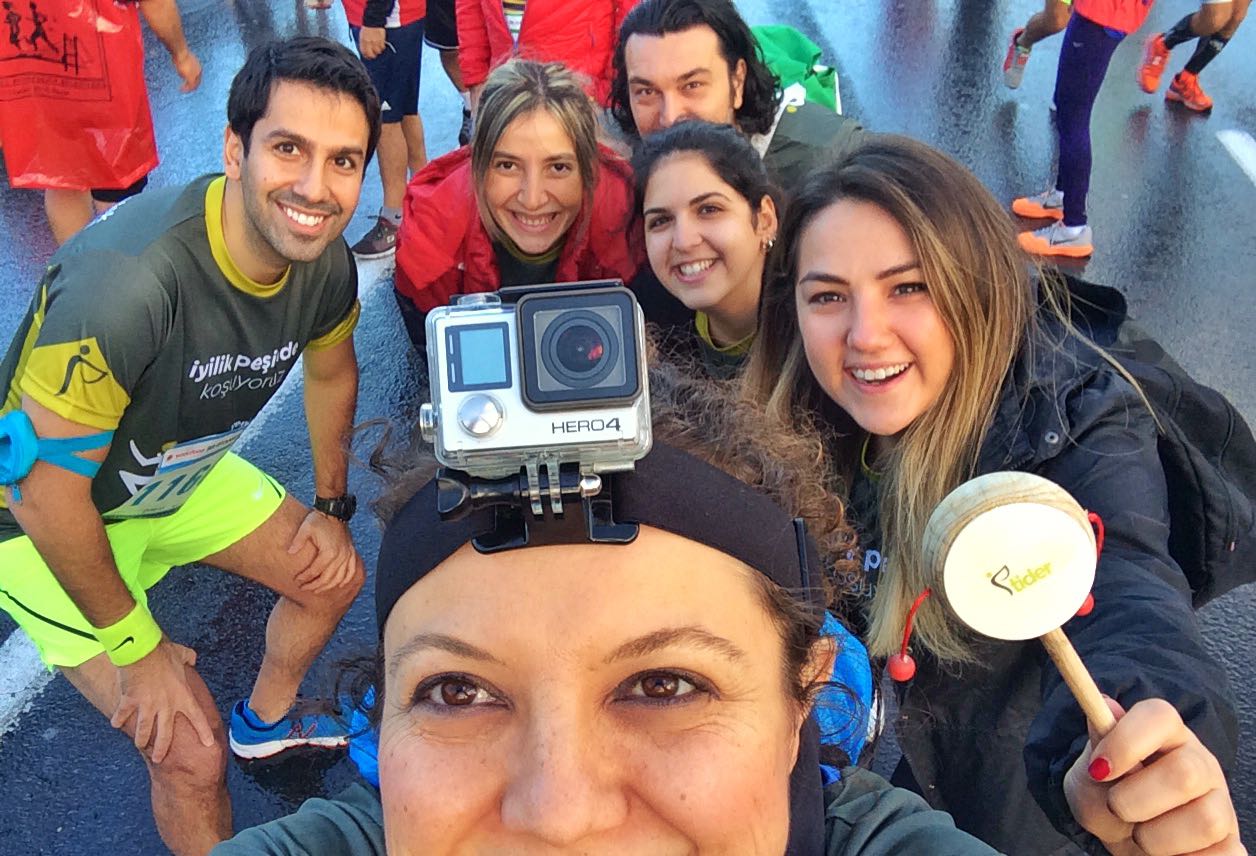 After photos, I started chatting with different groups. So many people had turned up; it was great. Unfortunately, actor Mert Fırat couldn’t make it. He’d been shooting late the night before and was too wiped out to run. But we spoke on the phone and agreed to meet up next marathon instead.

In the area where we congregated, there were also a good number of people from other NGO members of the Adım Adım platform. The place was alive with a carnival atmosphere in spite of the cold wind and drizzle.

After some great conversations here and there, it was time to run. Because the weather was cold and it would be disruptive to go during the run, I used the portable bathrooms on the side of the road before joining the line for the race. I was now all set to run.

At 8.45 a.m. I joined the 15 km line with fellow runners Başak and Özlem. It was there that we started discussing who was aiming for what kind of performance in the run. My predictions come true most of the time. So I said my target was to finish the run in 1 hour 15 minutes. But I told myself that I was actually aiming for 1 hour 10 minutes, only it’s better to be conservative with predictions. For Başak, a kite surfer and regular sportswoman, I forecast a time of 1 hour 30 minutes. Then I turned to Özlem and said: ‘I say you should aim for 1 hour 45 minutes. That’s a good time for 15 km.’ Once we had all agreed, we carried on chatting and taking photos. Here are a couple: 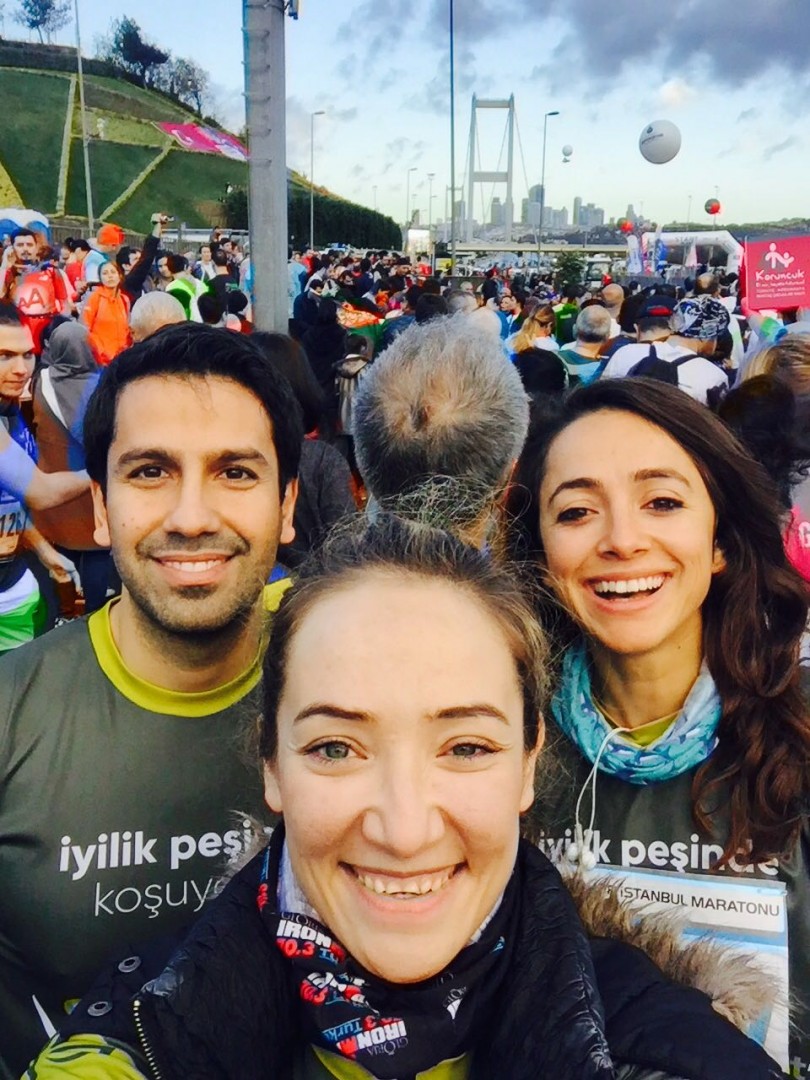 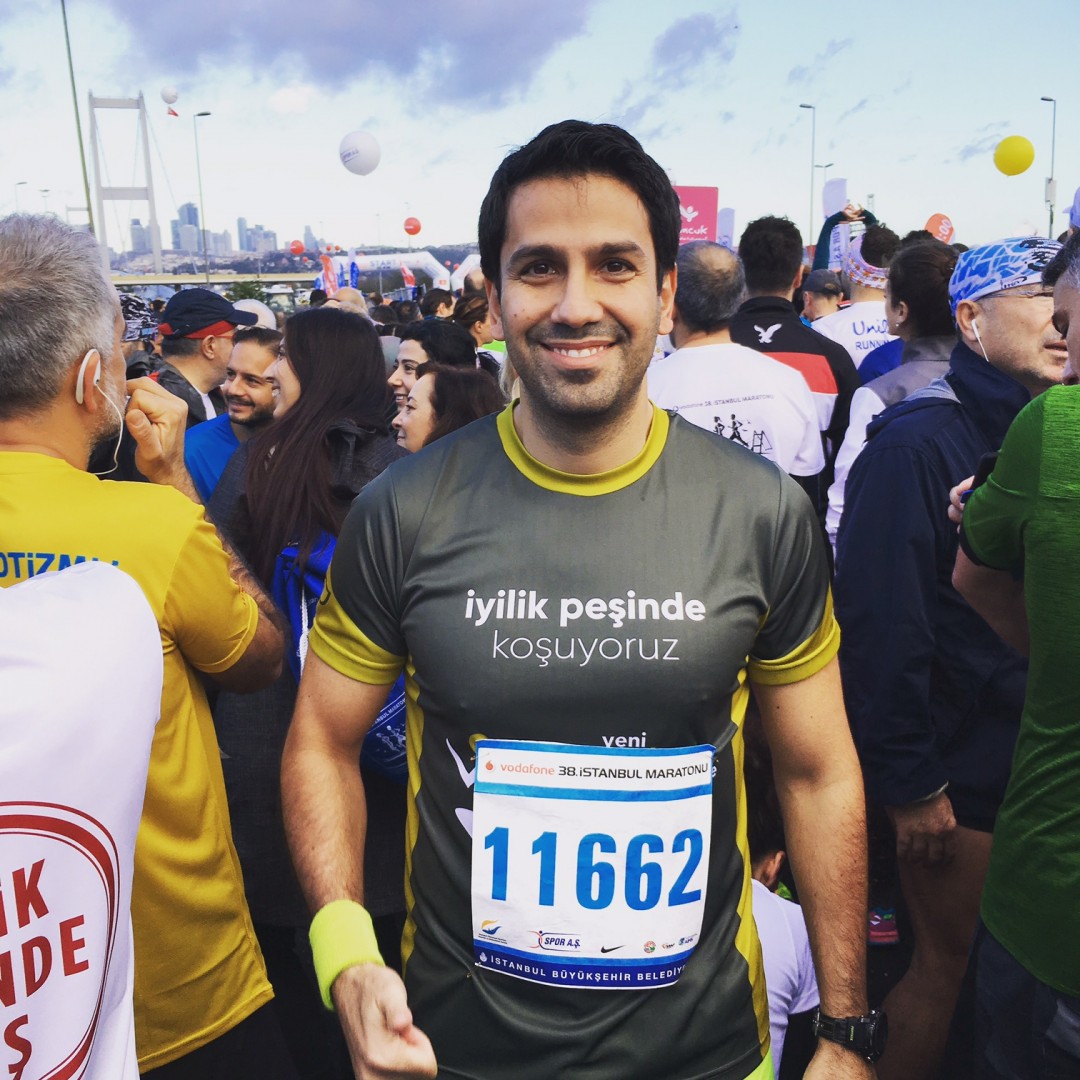 Not too long afterwards the starting gun went off. Because it was so crowded, we had to wait a while before crossing the start line. Within minutes we had reached the bridge and set off across it. At this point, of course, we were still chatting among ourselves. The wind may have been brutal, but the view was fabulous. We ran slowly to make the most of the view and at some point Başak got her phone out and filmed our crossing. Check it out here:

Soon enough we’d crossed the bridge and then carried on for another 1-2 km. Just before reaching the viaduct onto Barbaros Bulvarı I bid farewell to Başak and said, ‘I’m going to run at my own pace now.’ I started to pick up some speed. By the time I’d got a good pace going, I was on Barbaros Bulvarı, the road down to Beşiktaş. And because it’s downhill all the way, you can’t help but run faster. As you might expect, it was there that my speed peaked. When I crossed the 5 km line at the bottom of the hill, the stopwatch on my watch read 25:26. In Belgrade Forest I usually run 5 km in around 22 minutes; so, on the basis that I was below my regular average, I added a little more pace. Running at full throttle through Beşiktaş and Dolmabahçe, I got to appreciate once more how beautiful that road is - it’s my daily ride to work. Sometimes spectators were cheering on the roadside and sometimes you’d get people taking pictures as they ran to music. Again, there was a carnival atmosphere, but the real jamboree happened once I’d passed Karaköy and got to the Galata Bridge. Nike had organized this incredible setup: the bridge was packed with spectators on either side and these people were cheering on us runners like nothing else. This experience gave me a real sense of how soccer players can get all fired up in a stadium setting. I’ll be honest: I got all fired up myself and increased my pace. When I crossed the 10 km line at the end of the bridge, my stopwatch said 45:56.

In the meantime, I was getting to see some colorful personalities. For example, there was one guy running naked from the waist up. And he was running fast. I got curious, stepped up my pace and ran alongside him. He was also carrying a bag. I struck up a conversation, which went something like this (my first line was in Turkish):

We then reached the point where the 15 km route diverges from the route of the marathon and went our separate ways.

I’d been training regularly for the previous two months. But because I didn’t have the time, I only got to run distances of between 6 and 10 km. I needed to push myself a little harder for the last 5 km - the bit I’d neglected during training. I maintained my pace nonetheless. Approaching the 14 km mark, I ran into Pınar, our representative at Adım Adım, who was doing her first marathon. After exchanging hellos and quickly wishing each other well, I managed to keep up my pace into the final kilometer and finished the full 15 km with a time of 1 hour 9 minutes and 53 seconds. Here’s the proof: 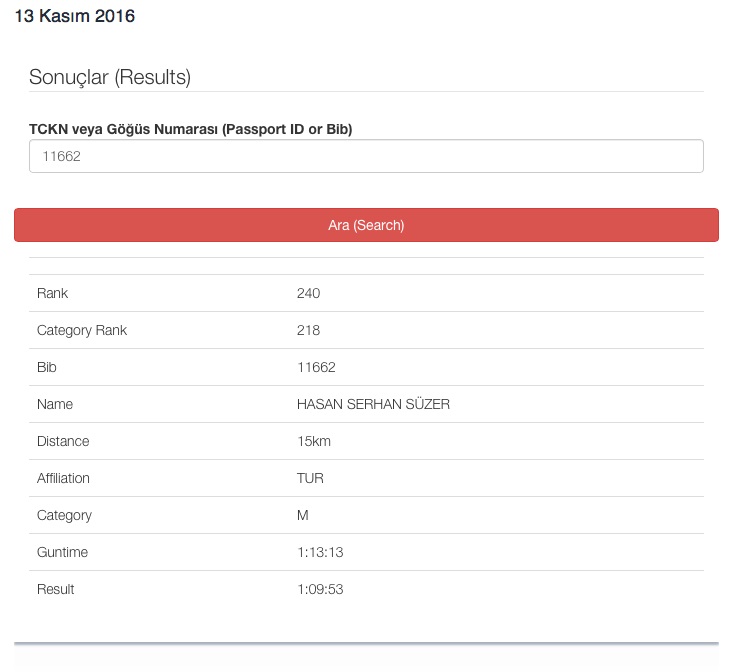 This was my best performance to date. Added to that, I’d been in Ankara and Konya the previous week, which meant not only the death of my training schedule, but also my self-abandonment to delectable local dishes such as ‘etli ekmek’ and ‘satır arası’ (best described as versions of pizza with ground or cubed meat, herbs and spices). Gratified to be in reasonable shape even so, I dived into a pastry shop (Eminönü Börekçisi) just beyond the finish line, reckoning that I had plenty of time. I chose a delicious potato turnover and washed it down with tea. I then ventured outside again and went to look for other friends from the team. Başak was first to arrive. My prediction had been bang on: she finished the race in 1 hour 29 minutes. I walked over to the buses doubling as checkrooms bags to fetch another friend’s bag. By the time I got back, Özlem had also finished. Her time was 1 hour 45 minutes, so I was right there, too. We crossed the road and started waiting for TİDER supporters doing the 10 km race. The place was getting more and more crowded by the minute. At around 11.30 the last of the runners (walkers really) came in and we took them off to Eminönü for fish sandwiches (there were around 50 TİDER supporters in all). 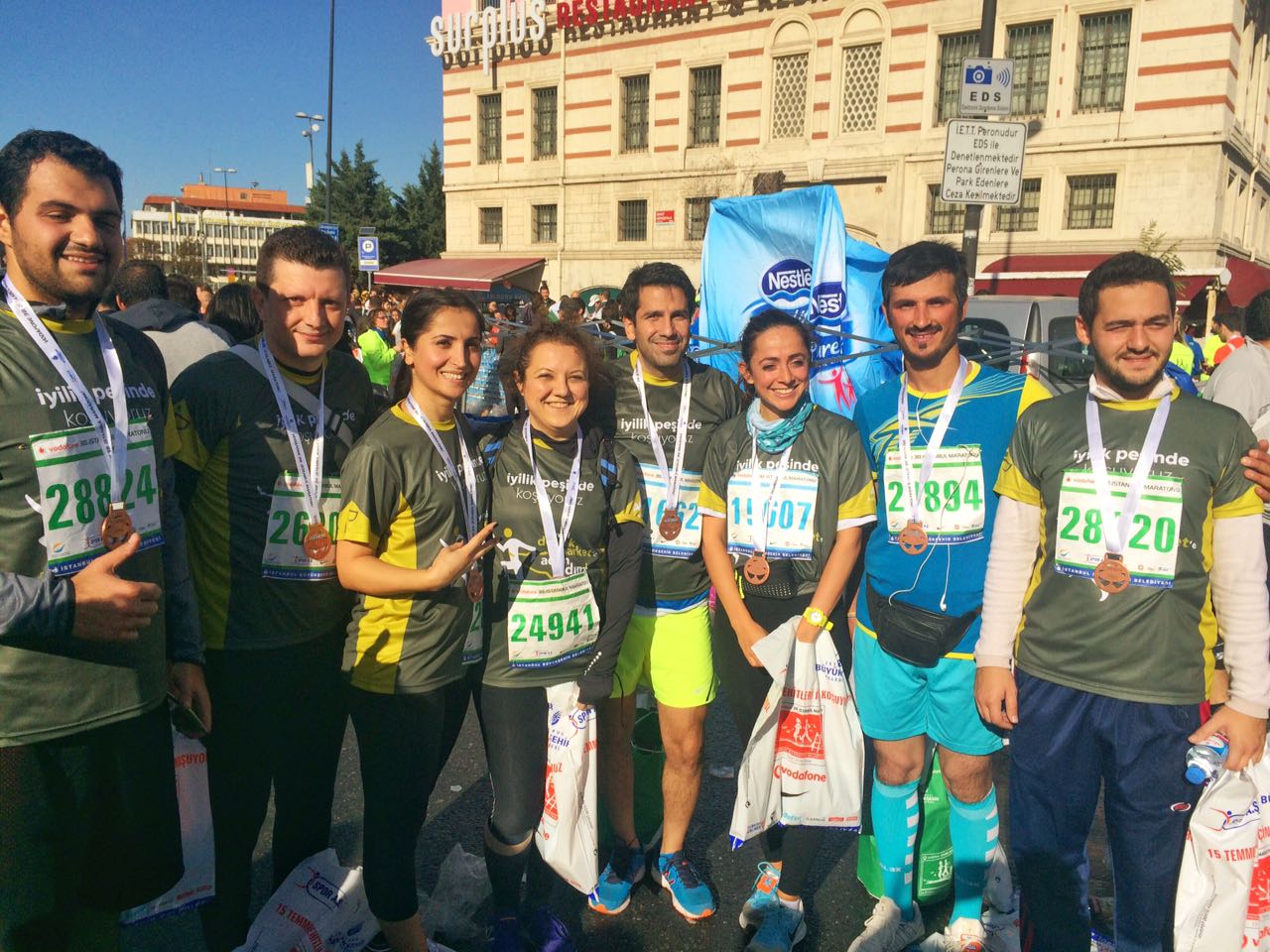 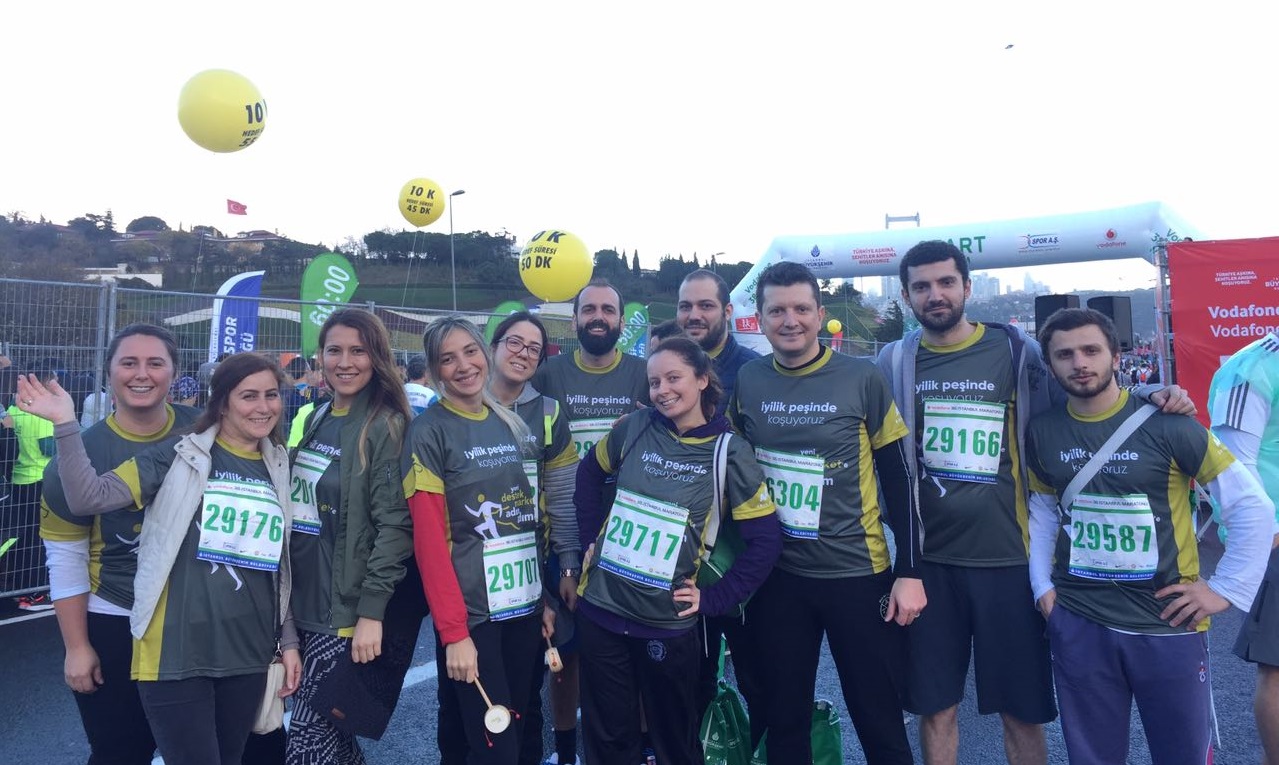 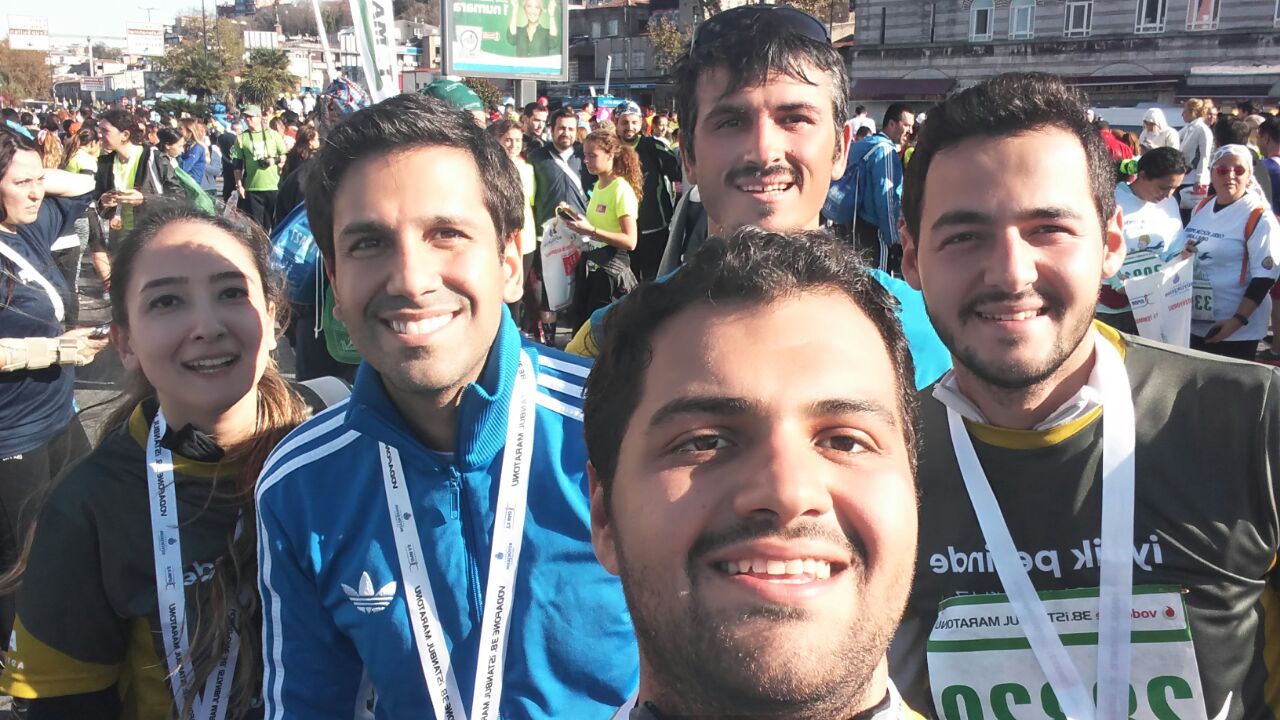 After this delicious lunch we said our goodbyes and, with no other transport available, walked back to where I’d parked my car at Dolmabahçe.

I then drove home, took a shower and visited my grandmother as I do every Sunday. This time we met at my aunt’s place. My parents, my brother Baran, my other aunt, her husband, everyone was there. I’d already had a potato turnover and a fish sandwich, so you can imagine, I wasn’t exactly hungry. As soon as I arrived, I told my aunts that I couldn’t eat another thing.

But then my family resorted to their routine tactic of offering a spoonful of this and a spoonful of that to try. The result? This ‘innocent’ tasting session quickly turned into a full-blown feast. My grandmother was also keeping tabs on what I’d eaten. She immediately passed me anything I hadn’t yet tried, which meant my pace of eating never flagged. What with all the soups and salads and patties and pastries that afternoon, I must have consumed at least double the calories I’d burned off during the run. Never mind, the food was fabulous. Plus I got to see my cousin Angie’s daughter, Caroline. She’s a beautiful baby and very calm. Here we are together: 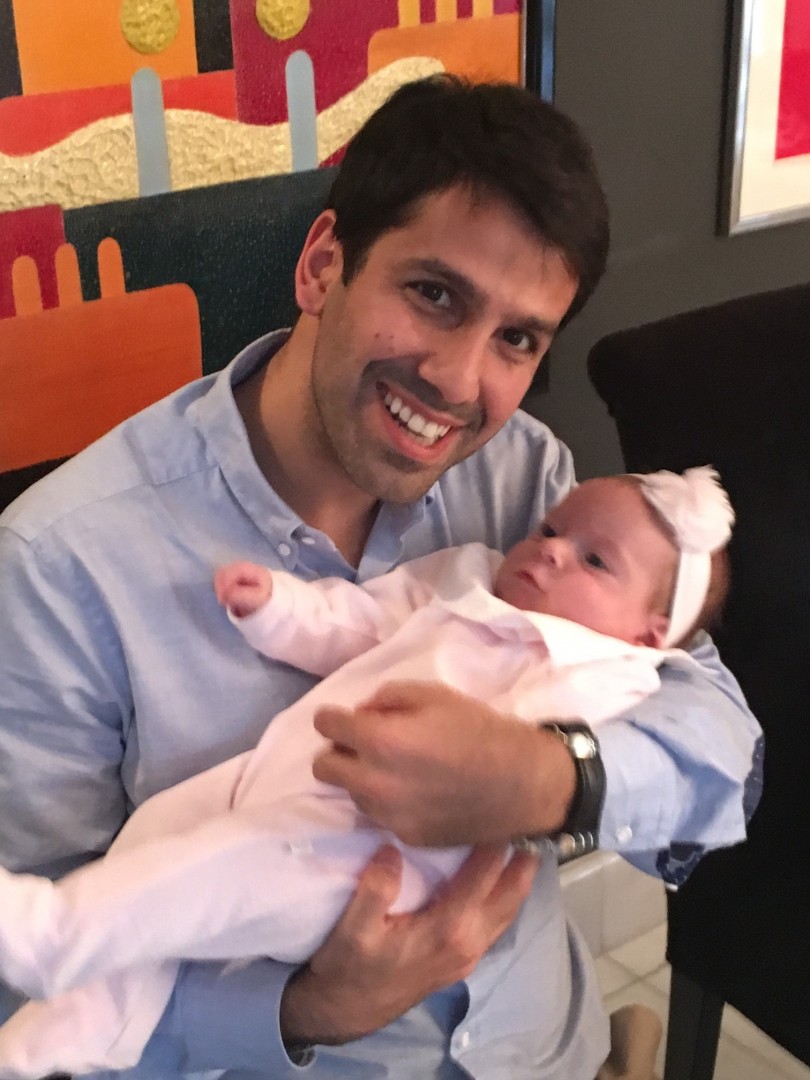 That morning I ran for good. I saw a lot of dear friends and had a good time. I had a lot of delicious food. And later in the afternoon I saw my family. What more could I ask for?

Actually there’s one more thing: our campaign is still running, so if you’d like to donate, we’d welcome any support you can give. This would help us get our Support Project (Support Market + Support Human Resources) off the ground in the Bağcılar-Esenler district, one of the most troubled areas of Istanbul. For detailed information about the campaign, please visit:

And to donate, all you have to do is access the following link:

For more details, you can read my previous blog at: http://www.serhansuzer.com/tr/on-binlerce-kisiye-destek-icin-el-ele

Take care until next time.