Runtalya: Anatomy Of A Run 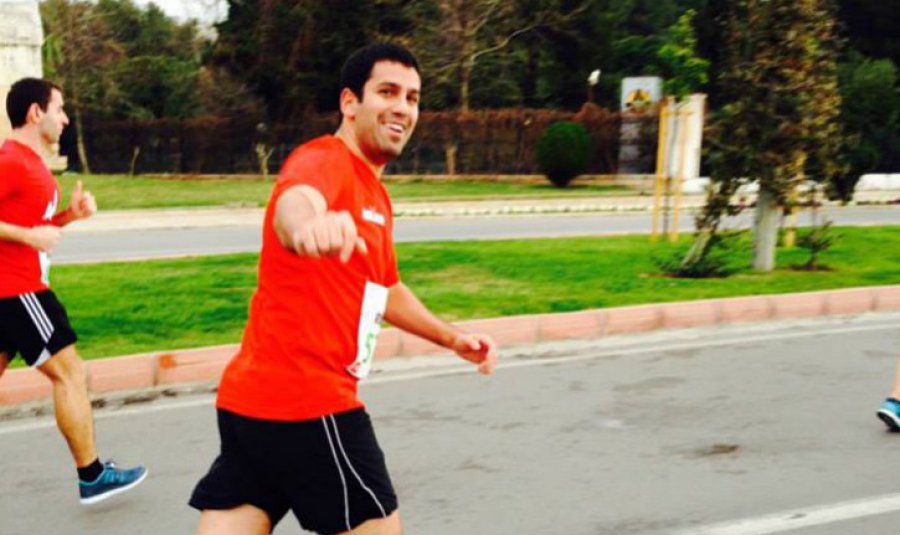 I spent a wonderful weekend combining sport and holiday at Runtalya, an event in Antalya that has become Turkey’s second biggest city run and that brings together a diverse group of sports lovers, from top marathoners and pint-sized sprinters, to philanthropists and nongovernmental organizations.​

Here are some of my impressions of Antalya, both before and after the race…
Coming as it did after a hectic week it was a real pleasure for me to be able to combine sportandholiday. This time, I was in the city of Antalya for Runtalya, having arrived Friday evening. Once I’d checked in at the hotel the search was on for a place to eat… We decided on Mermerli Restaurant, in Kaleiçi, the historic city center. After feasting on some tasty meze and sea bass we headed back to the hotel to rest. 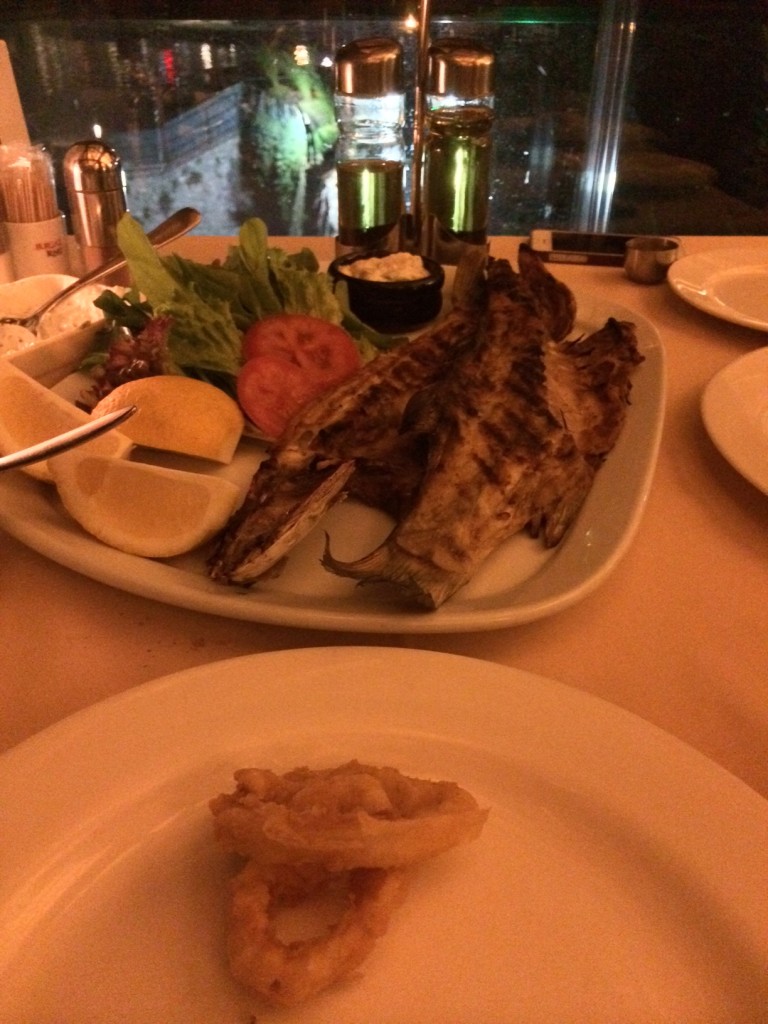 After an extremely intense and sleep-deprived week I naturally slept in the next morning (which for me means getting up at nine ).
After breakfast I got some work done in the hotel lobby. As I sipped coffee and tea, and studied my notes, a beautiful dog boundedup to me. I’d no sooner exclaimed “What a cute dog!” and reached down to pet him when he jumped up onto my lap. A moment later the dog’s owner came over. 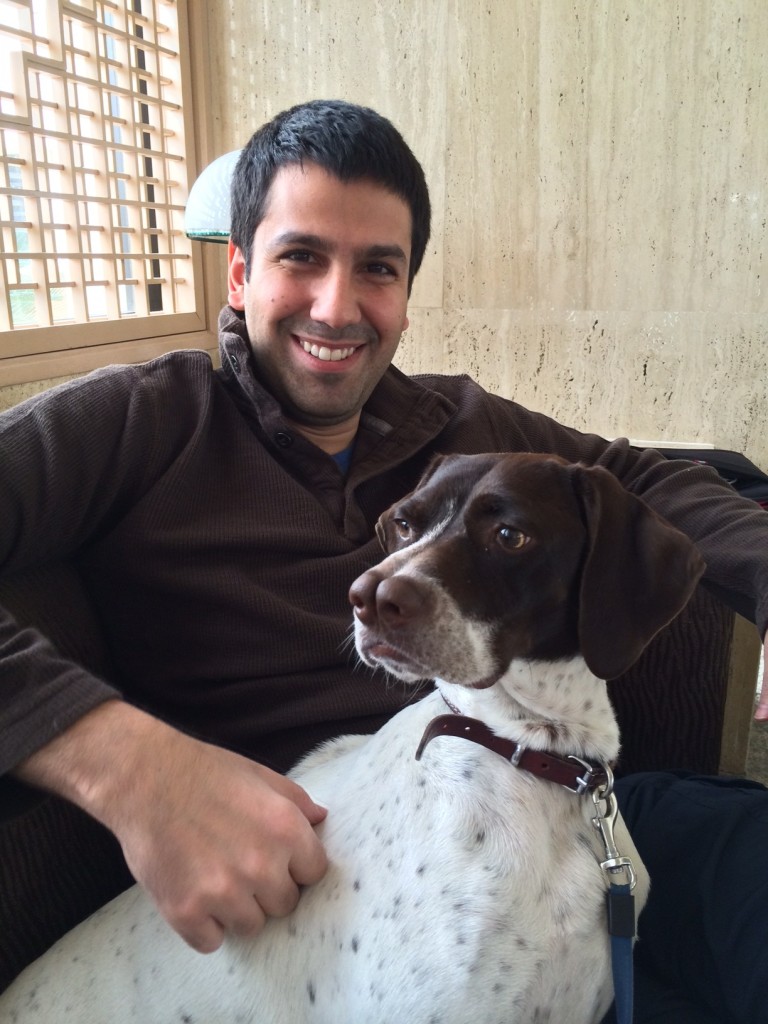 The dog was named“Moka,”the Turkish spelling of “Mocha,”because of his chocolate-colored fur. I was told that Moka’s breed is known as “Tarsus Çatalburun,” Turkish for “Tarsus Split-Nosed,” after the distinctive shape of its “double nose.” The breed is unique to the Tarsus-Mersin region of Turkey, and it is also known internationally as the “Turkish Pointer.”
After playing with Moka, getting some more work done and taking a short training run, the Spa was just what I needed. Next up was a visit to the Terracity Shopping Center, where we’d pick up our race registration packages and make plans for dinner that night. Frankly, I had no desire to dine at the mall’s indoor food court or at the restaurants located justby the entrance. Although Terracity is the best mall in Antalya it is no different from the many shopping centers in Istanbul. What’s more, it doesn’t even have a cinema. (A quick reminder: Back in the day, I opened the KFC at the Terracity Shopping Center in Antalya. It was the city’s first KFC restaurant, and is a personal source of pride. I saw during this visit that it is still one of the two busiest restaurants in the mall. I’ll touch on this subject later in a different post.) Moving along to that evening’s dinner, I felt like trying something different, so we left the mall to see what we could find. “That’s it, let’s eat over there,” I said as soon as I spotted a sign above one of the restaurants just across from the mallreading “Black Sea Home-Style Cooking”.
We crossed the street and soon found ourselves in a modest Black Sea restaurant tucking into regional specialties like kale soup, flatbread pide baked in a wood-fired oven, fried anchovies dredged in cornmeal (yes, you read that right: we had Black Sea anchovies in the Mediterranean city of Antalya, and they were delicious), and Laz Böreği, which is not unlike a kind of creamy baklava. The tab for the entire feast came to just 35 TL, or just under $16.
I’d returned to the hotel in high spirits when I ran into my old friend İbrahim Betil, whom I’d last seen at Ashoka (an NGO that supports social entrepreneurs, which I previously wrote about here). As we chatted he naturally asked me why I was participating in the run. I answered that I was running for sport, but we also talked about how representatives from NGOs like Adım Adım and AKUT would be running as a group this year. I told İbrahim that we might do something similar in future – I am, after all, the founding chairman of the “Food Bank Association,” an organization that fights hunger and malnutrition, and I personally participate at every opportunity when it comes tohumanitarian relief and aid activities. I liked the idea of having our entire team participate in a run to publicize our association and its objectives.
After spending some time in the lobby, I went up to my room to rest. My expectation of a good night’s sleep before the run was dashed by a loud knocking on the door at about 3:30 in the morning. Half asleep I called out, “What is it?” A man’s voice responded, “Your hamburgers, sir.” Now angry, I shouted, “What do you mean, hamburgers, I’m trying to get some sleep here.” The man apologized through the door and left. I won’t mention the name of the leading hotel at which I was staying, but I will say I was surprised something like this could happen. I’ll let you guess what was actually meant by the term “hamburger” at that time of night. It was impossible for me to get straight back to sleep. I remember nodding off briefly some time before dawn, until my alarm clock jolted me out of bed at 6:30. Cursing whoever it was who’d woken me up a few hours earlier, I got ready and went down to breakfast. When I got to the course where the run would be held a small crowd had already started gathering. I went over Nasuh Maruki, who was stretching on the grass with a team from AKUT. He told me he wouldn’t be able to run because of the motorcycle accident he’d suffered during the Gezi Park protests. I offered him my condolences and best wishes before going off to begin my warm-uproutine. Here’s a photo I took just before I started: 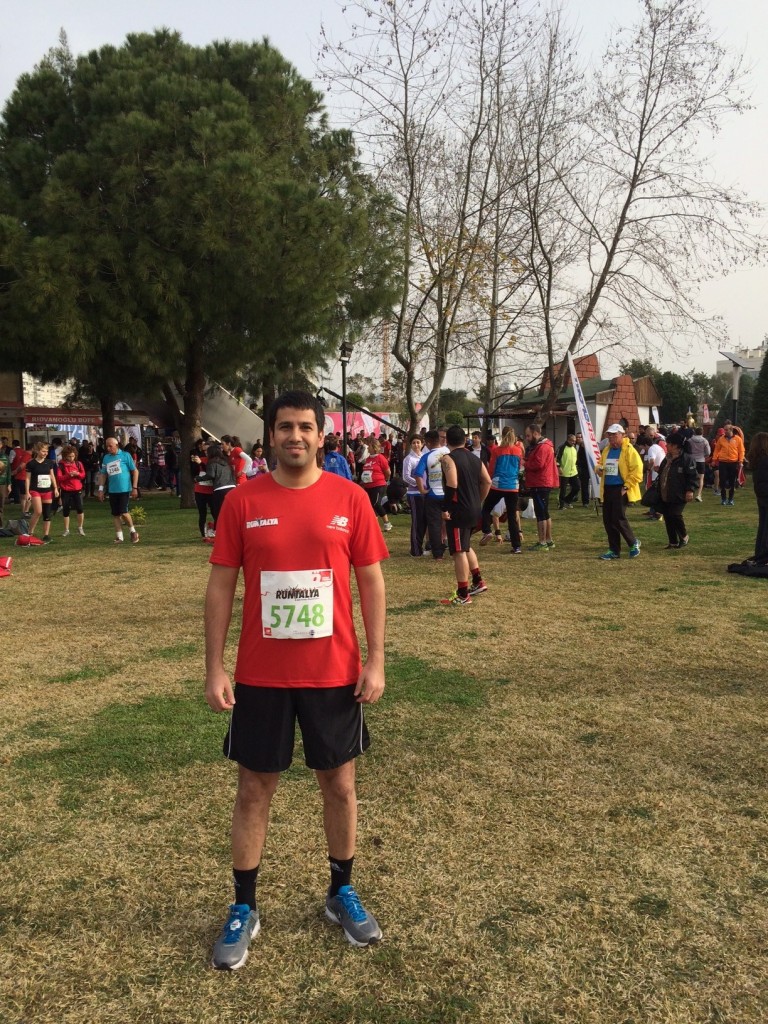 As I was warming up I spotted Mehmet, a fitness trainer from G-Mall MAC. I told him I’d be running the 10K without having done any special training, and said I hoped to start working out again soon. Finally, as the clocks showed 9:00 a.m., the marathoners and half-marathoners began sprinting. At 9:15 the starting gun went off for the 10K I was running.
I’d promised myself before the run that I wouldn’t overdo it, and kept to aa comfortable pace. At one point I saw Eda, a long-time friend, standing on the side of the road with a friend of hers. I waved hello as I ran, continuing on my way. Here’s the picture Eda snapped of me: 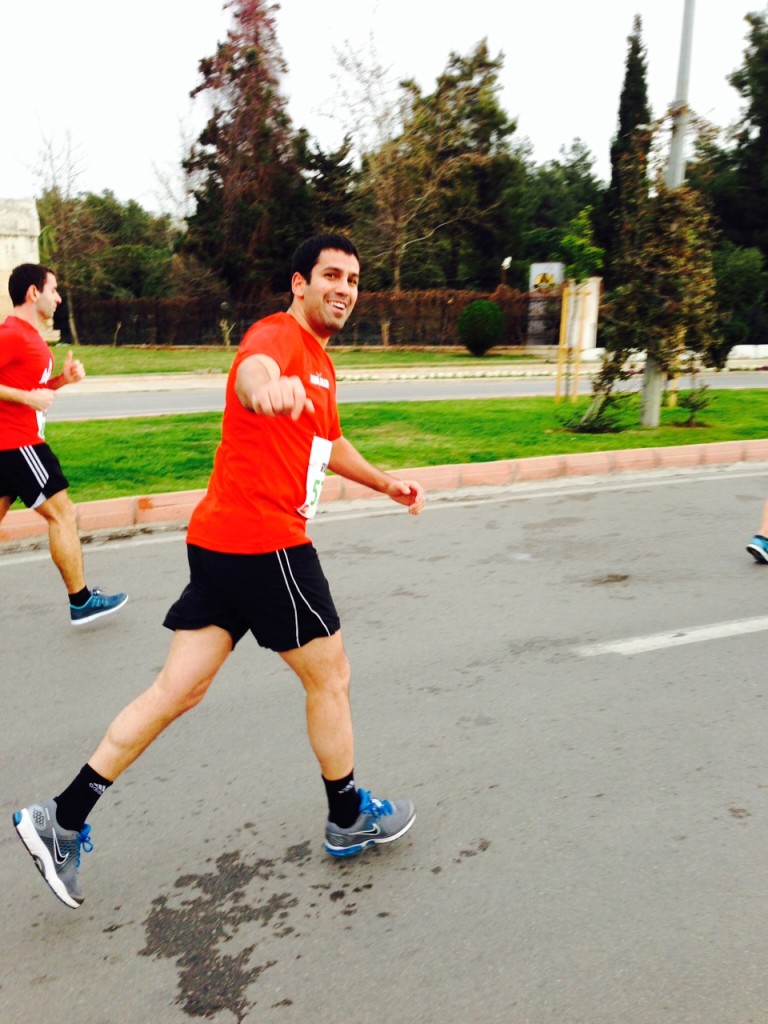 As I was picking up my pace (at around the 4 kilometer mark, I think) I saw a DJ spurring on the runners with music he was playing on a truck. I showed my appreciation with a thumb’s up, and he responded in kind. It was at this point that I started passing people. The crowd of runners started thinning after the first five kilometers. Of course, other runners were also passing me. In fact, a 60-year-old woman left me behind! I couldn’t believe my eyes. I assumed she was a former athlete but still upped my tempo and passed her right back. With about 500 meters to go I passed a group of seven runners who looked to be in their twenties. Two of them responded by jacking up their pace and passing me in the last 50 meters. And that was the end of the run. Below you’ll find the pose I gave after finishing the race in exactly 50 minutes: 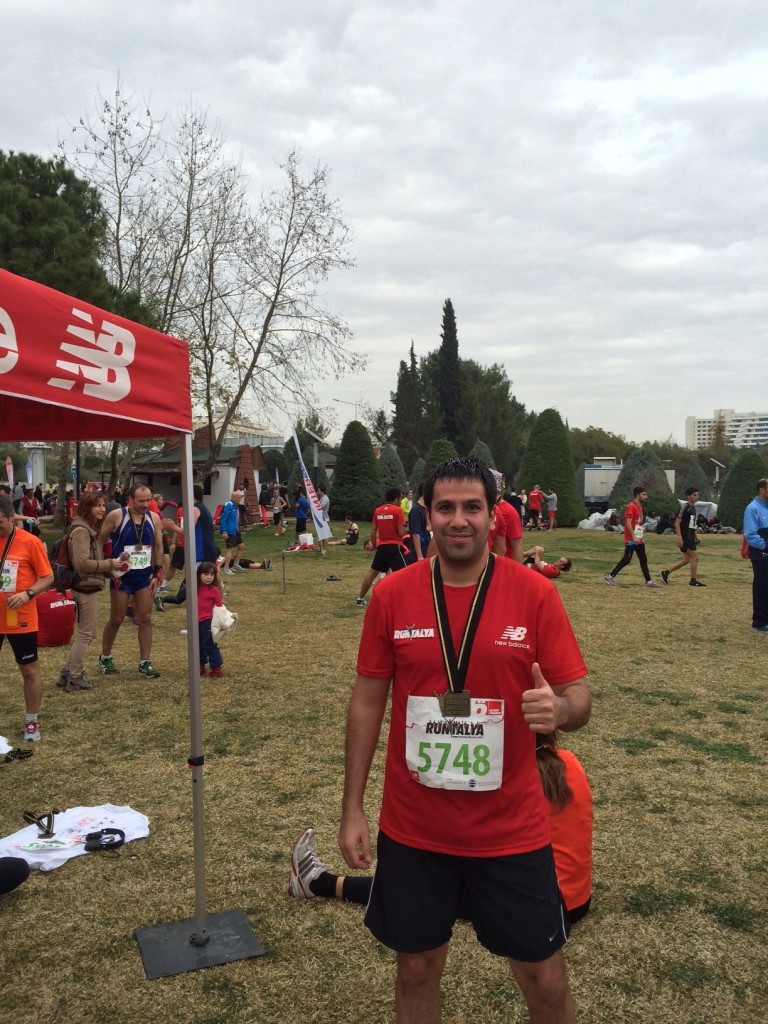 As I returned in high spirits to the hotel I greeted a group of performers from Kenya in their own language. Saying “cambo”(hello) and“hakuna matata” (no worries),I had my photo taken with them. 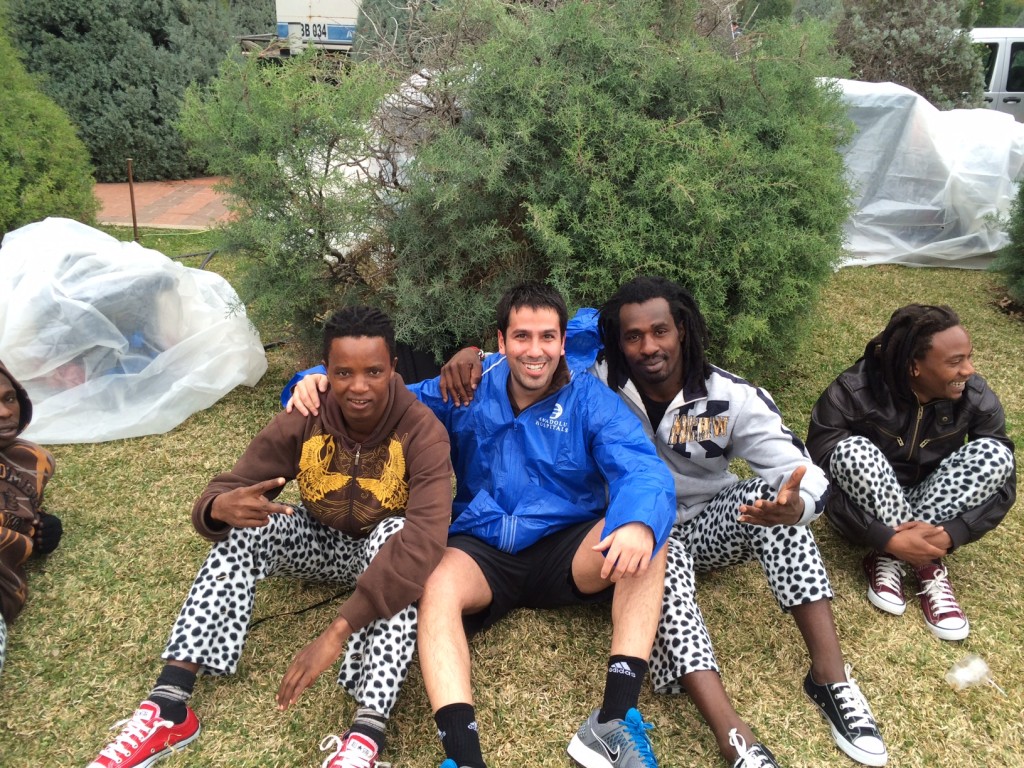 Back at the hotel I packed for the journey home and spent some time with a parrot named “Pokka” before setting out for the airport.

Overall, I can say that Runtalya is an enjoyable and well-run event. If there’s one thing I’d criticize it’s the way runners going and coming get all jumbled up at the five-kilometer point, where the course doubles back. It would be nice if they reorganized that. I hope Runtalya continues to be held annually. Not only is it a fun-filled event, it also helps hotels with their occupancy rates during the low season.