The year 2019 crowned by championships! 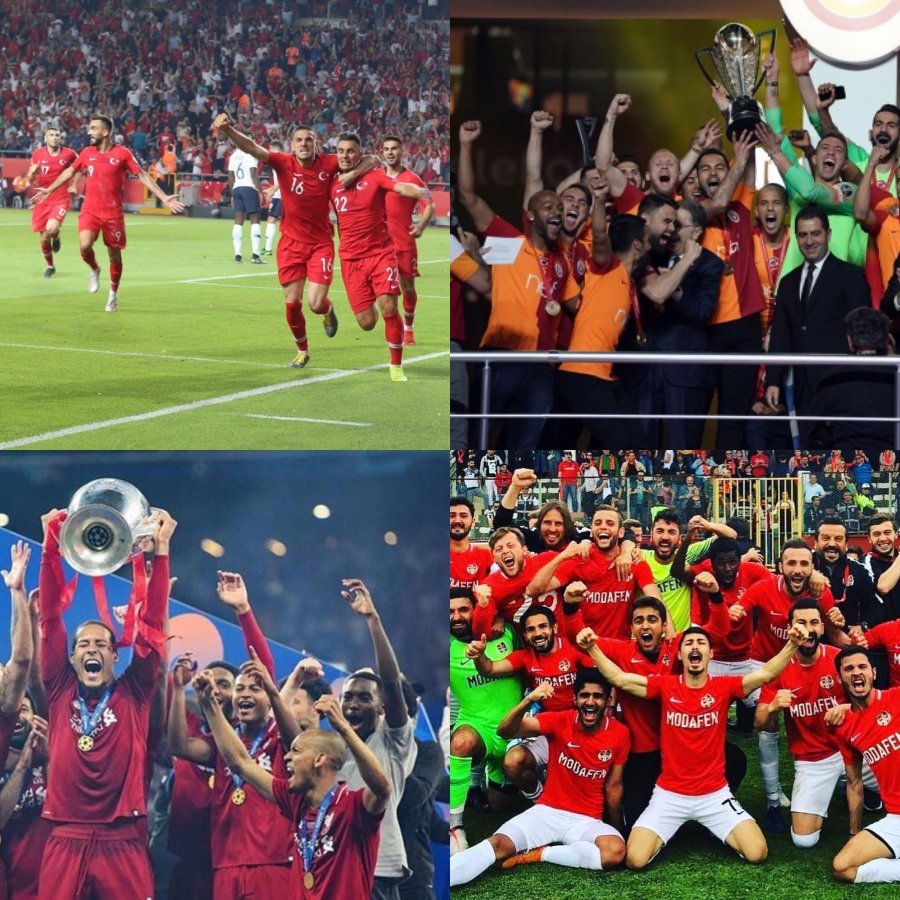 This year was a great year for me in terms of championships. The pride of our neighbourhood Modafen's rise to the 3rd division, my football team Galatasaray roping in the win for the 22nd time, and the football team I support in England, Liverpool becoming the champions of the Champions League, and finally our national team defeating France at the world champions was the cherry on top.

In 2019, almost all the teams I support in football in different leagues declared their championships. The first of these, our neighborhood team Modafen being the leader of their own group in the BAL League and winning the promotion match to be a professional by rising up to the 3rd league. You can find these posts at https://serhansuzer.com/en/mahallemizin-gururu-sampiyon-modafen and https://serhansuzer.com/en/okullu-sporcu-yetistiren-sampiyon-modafen-modeli.

The inevitable rise of Cimbom 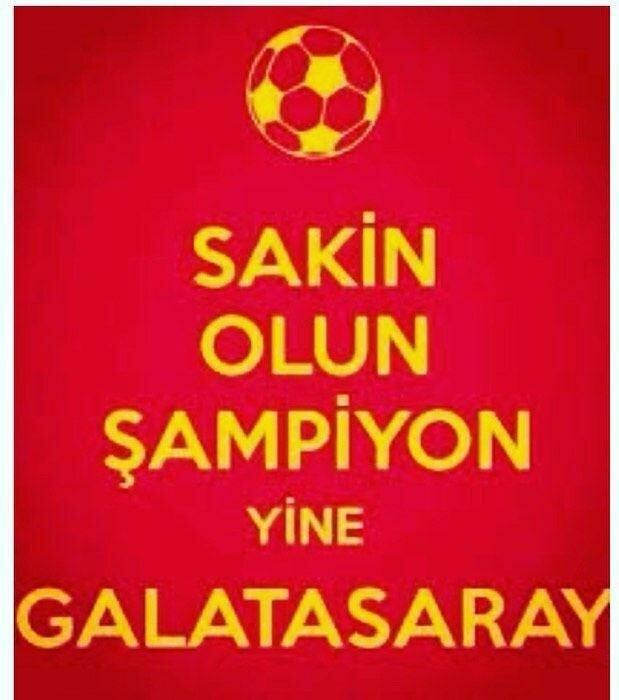 At the beginning of the season, the team struggled to manage with serious deficiencies in the forward and defense, and with a low score of 29, they were 6 points behind the leaders Basaksehir and finished in fifth place. Afterwards, with some stable transfers, team focus and clamping down for the championship brought them the championships. Especially with the transfers of Marcao and Luyindama to the defense, made the first 21 goals scored against us in the first half much less as it became a more resistant team. The contributions of Mitroglou and Diagne transfers to the forward position were below expectations if you ask me, but with their scored goals in the critical minutes strengthened the team’s position. Especially with the increasing performances of Feghouli and Onyekuru had a positive impact on the team in the second half.

A proud year despite some mistakes

As a team, we have left behind a year where we had difficulties but achieved the desired result from time to time. In addition to all these positive things, there were also things that I didn't like. The fact that the first 11 players consisted of being foreigners, the return of Byzantine like games to the congress of Galatasaray that did not suit the club, despite all the good work done, Fatih Terim and the technical staff shaming the club twice and receiving some pretty serious penalties, albeit being under the influence of the referee, not being able to defeat Fenerbahce in their own field, a character like Emre Akbaba who is considered such a valuable football player suffering some serious injuries twice and the weak performance they showed in the European Cup this year was all part of the negativity. 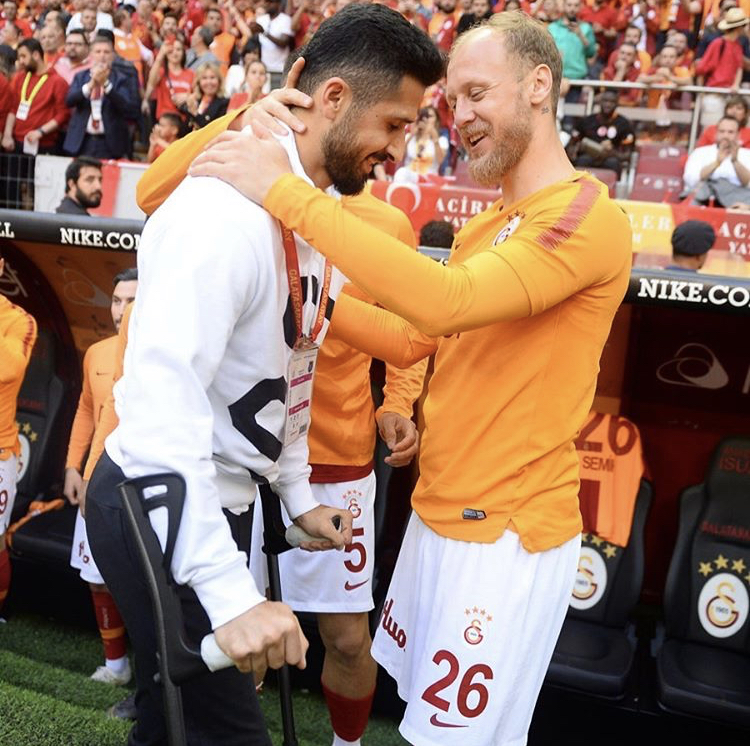 Despite all this, I am proud of my team and the club, and I wish that this positive momentum will continue into the new season. I wish my team all the success in the new season to win the 23rd Championship. I think we should at least leave the group this year in the Champions League. Come on Cimbom, show everyone once again this year that Turkia's pride is in Europe. 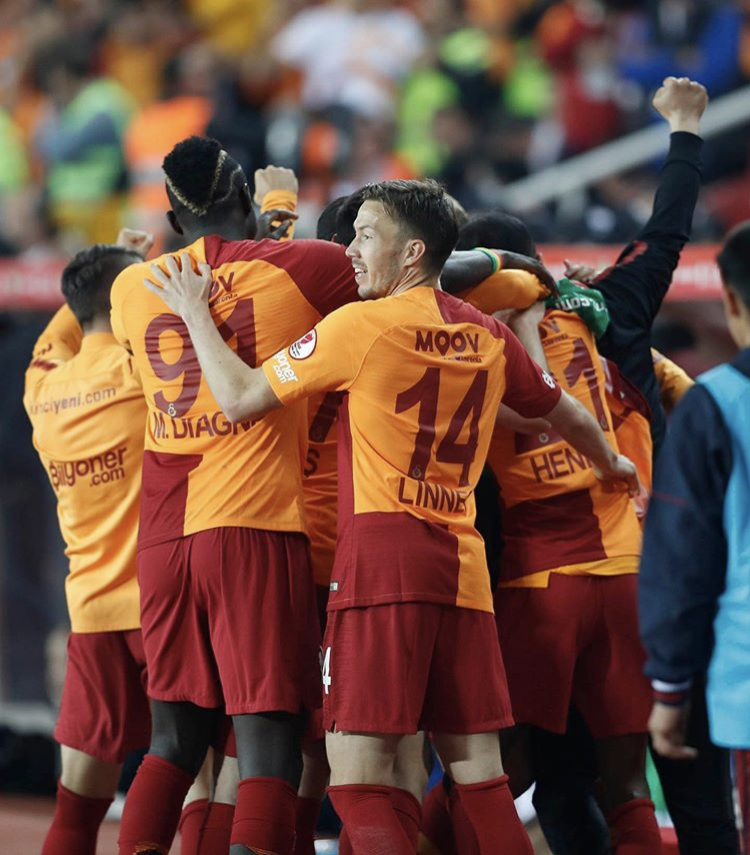 This year, Galatasaray won the championship, especially in the second half of the league.

Liverpool and an incredible return

The third championship that made me so happy this year was the English team I support, Liverpool's Champions League win. Especially the games played in the quarterfinals and semi-finals were mind-boggling.

First let's start with the Dutch Ajax, which is famous for their ability to train good players both mentally and physically. Ajax’s last opponent after 16 matches in the Champions League was with the Spanish giant, Real Madrid, lost the first match 2-1 at their own field. The Dutch showed an unexpected performance against their opponent in Spain and won the match 4-1 to reach the quarter finals. Ajax was matched with Juventus in the quarterfinals. As the first match ended in a 1-1 draw, everyone thought Juventus would go on. With Ronaldo's head goal, Ajax fell behind 1-0, and with Van de Beek and Matthijs de Ligt with 2 goals, they found themselves rising to the semi-finals.

The grasshopper had made a miraculous jump twice and reached the semi-finals. However, this time in the third karma done the opposite. This time Ajax witnessed a miraculous return on themselves and was eliminated.

In the Ajax - Tottenham Hotspur match played in the semi-final rematch, the British team who were down 2-0, won for the first time after Moura's last-minute goal and then with his hat-trick won 3-2 for the first time and rose to the Giants League final.

British embargo on the European finals

Now let's look at Liverpool's miraculous encounters. Liverpool was aligned with toughest line-up in its last 16 rounds this year and got paired with German giant Bayern Munich. The first match at home was very difficult with a score of 0-0 during the Liverpool tour. However, the strong opponent of the red-white team who scored 3 away goals in the quarterfinals was the opponent of Porto. However, the real bomb was in the rematch with Barcelona, who are according to many authorities in the field, one of the world's best football teams, getting defeated by Liverpool this time 4-0.

In an exceptional way this year, in both leagues, did the English witness the finals. In the UEFA Europe League finals, the Chelsea-Arsenal match saw Chelsea laughing their way to carry on yet another trophy into their hall of fame. Then in the Champions League, Liverpool defeated another English team, Totthenham Hotspur 2-0, to win the cup. 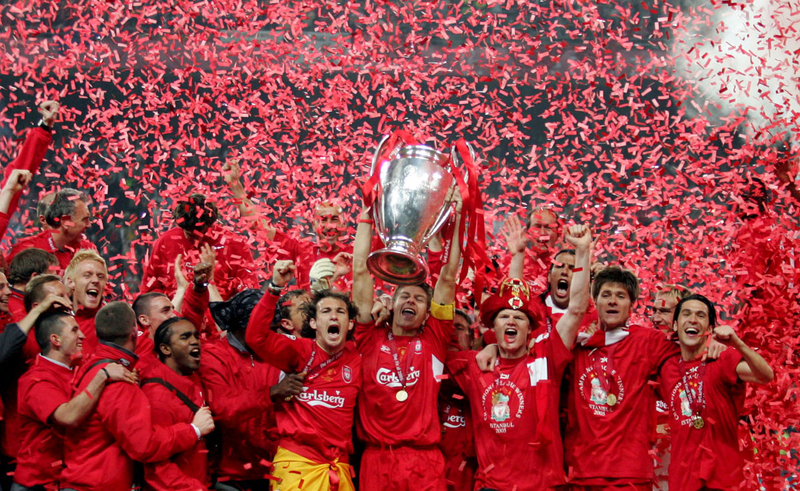 Liverpool Champions League championship made me very happy. This was Liverpool's sixth Champions League title. Congratulations to Liverpool! You will never walk alone. Although Liverpool won by an astronomical 97 points in the English League, in the Premier League they lost the champions to Manchester City by 1 point. Nevertheless, I would like to point out that coach Klopp done a great job at Liverpool. On the other side there is of course the Guardiola effect. The English League this year was all about “Liverpool and Manchester City” and “others”. I wish Liverpool to dominate the league next year.

An honorable message from Liverpool to EkoRE

In the meantime, it was a very proud moment when my team Liverpool got in contact with me even before we started production to advise they would like EkoRe to help the teams’ environmental goals and in this sense, become a sponsor to the project. The message they sent to me in short was as follows:

“We assume that you have received the document, which was forwarded to the EkoRe’s Turkia Head Office, sent to you on behalf of the Liverpool FC Headquarters. In addition to this booklet that aims to give you an insight into our club, I wanted to contact you at the earliest opportunity to share more detailed information about the unique ways in which we bring hundreds of millions of followers from around the world.

We will be very excited to be able to get to know EkoRE's work better and to share Liverpool FC's contribution to creating greater public awareness of your renewable energy services and solutions. We believe that we can support your efforts as one of the leading companies in the transition to the clean energy economy of the world through a unique platform to promote the latest solutions developed and offered by EkoRE”.

I am proud to have received such a message from a team like Liverpool before the production at EkoRE. Maybe not this year, but I would like to help the teams in the future to promote sustainability. Football is an important worldwide stage and these messages must be given to promote sustainability for the development of humanity. I would like to take this opportunity to share some of the images that Liverpool sent me: 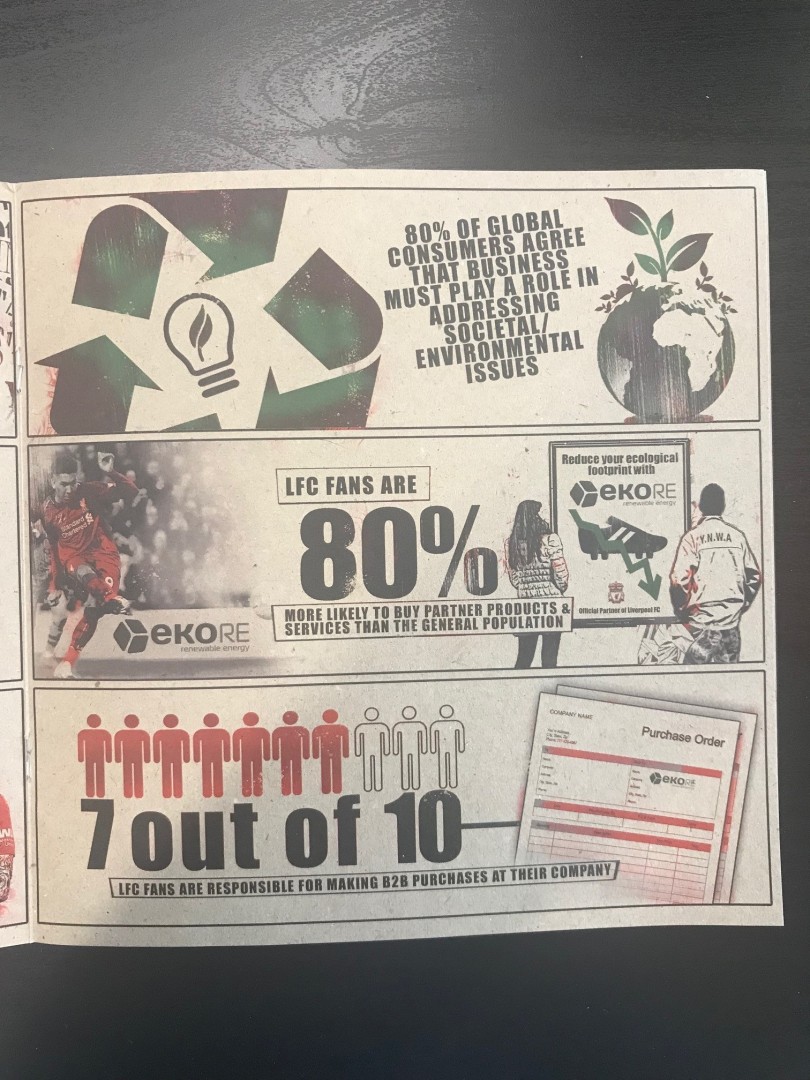 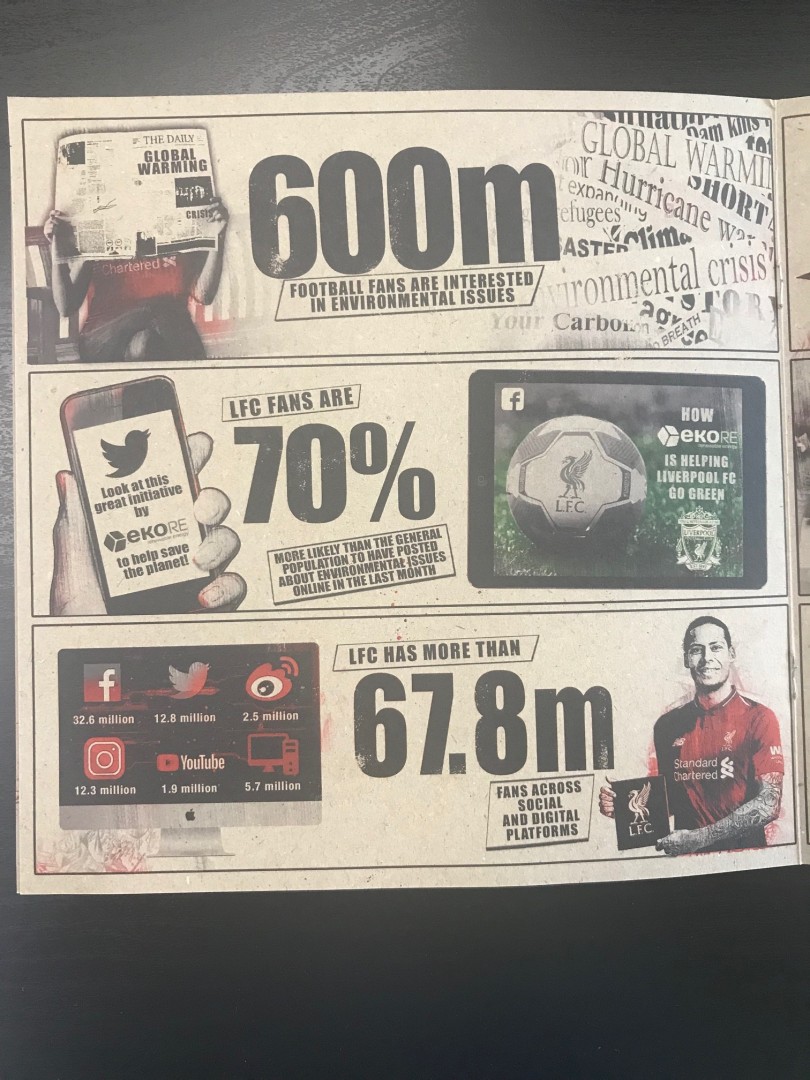 …and the victory of France in the qualifiers!

I was very surprised to learn that while I was in China last weekend that we had defeated the last World Cup champion France. Receiving such good news while being abroad was the message of continuation to a season that went well. We also shouldn’t deny the Senol Gunes factor here. Well done. He did a great job as soon as he arrived in the role. I hope that we can participate in the next European Championship and World Cup with him.

So, with the good luck of Red, come on National Team, Galatasaray, Modafen and Liverpool! Wishing them much more success in the future…

*I did not explain the rules of the stars to my foreign readers: for every 5 championships won, the team is granted 1 star. These stars are then added to the coat of arms.