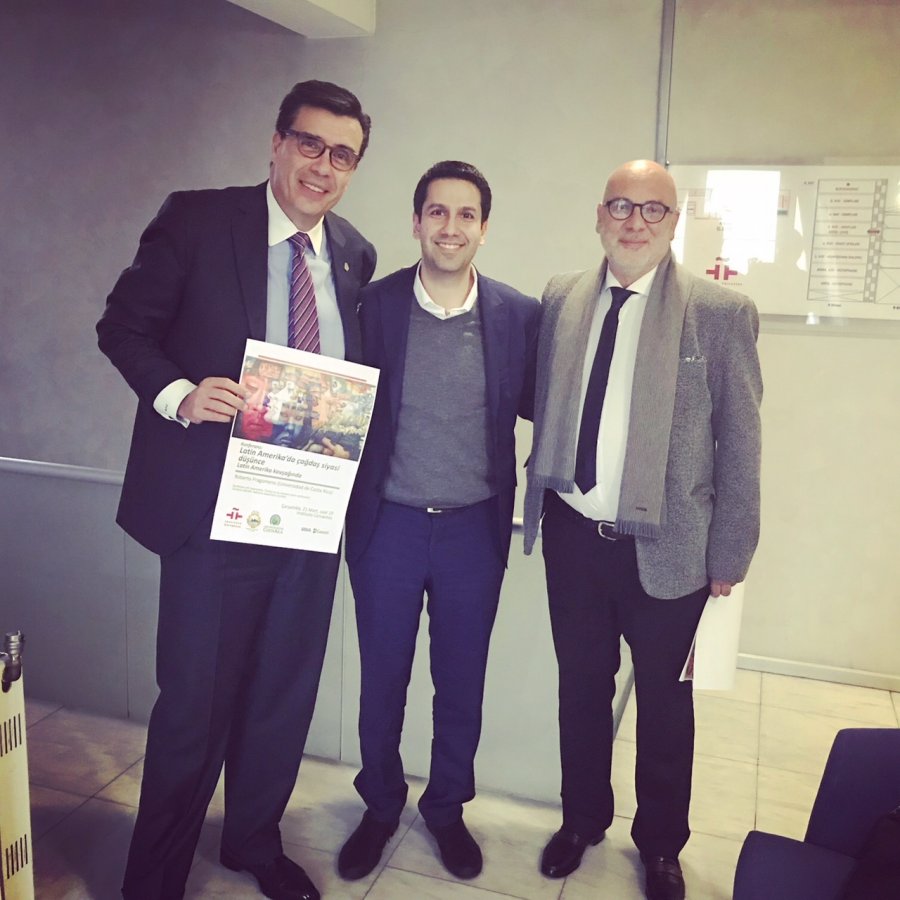 In my last article, I had written about how the organisation was made by the Costa Rica Embassy on the 21st of March at the Cervantes Institute, and that Professor Roberto Fragomeno, Associate Professor and Director of the School of Philosophy, had made a speech titled “The political thoughts of Latin America”. In this week’s article, I would like to share with you the summary of the panel conversations and how we have applied these to our own region.

The Costa Rican University Professor Roberto Fragomeno was accompanied by our ambassador on the panel, Mr Marcelo Varela-Erasheva. As I share with you the summary of the two hour panel conversation, I will also within the article share in italic font how we can apply these to our country and regions.


A photo we took with the ambassador and speaker minutes before the panel conversation. From left to right: Costa Rican Ambassador Marcelo Varela-Erasheva, myself and speaker Roberto Fragomeno

Ambassador’s Presentation Summary: Argentinian born speaker Fragomeno, has been living in Costa Rica for 29 years and knows our outlook of the world very well and knows our region very well. For this reason, we requested to hear his analysis, to share his thoughts and views with us. Politically, what is happening in Latin America? Faced with unexpected conditions, what are Latin American countries going through right now?

The panel where the speakers were located. On the left is speaker Fragomeno and on the right, ambassador Varela

Roberto Fragomeno’s Speech (The comments made in italic font will be representing my comparison of Latin America with our country and region to give you further detail. I will be doing this under each sub heading).

When I speak of Latin America, I refrain from speaking of it as a narrow national view point. For example, I accept and understand that identities of Mexico and Argentina were creations of time; however without practicing any favouritism, we are speaking of a united idea here. And this idea is Latin America’s idea and it’s not a tangible reality, on the contrary it’s a project.

In our country, narrow nationalism is knee deep. This notion has a similarity with micro nationalism in which I first came across with when I went to the army to do my military service. After everyone had asked me for my name and surname, the next question was where I was from. I was really getting sick of these questions but in order to comply, I found the right technique to answer this. If anyone ever asked me “where are you from?”, I’d answer their question with a question and ask “where are you from?”. If they answered to a region from the East or South, then I’d say I was from “Gaziantep” (my father is from Gaziantep), if they said they were from the Black Sea, then I’d say I was from “Trabzon” (my mother is from Trabzon), if they said anywhere in the West, then I’d say that I was “born and bred in Istanbul”. For me, it doesn’t matter where you come from, your character, mindset and conscious is most important. This doesn’t apply just to the people of Turkey, but to people worldwide. The rest is unnecessary.

Our region is also still living through this trauma. I hope that the Western countries will let go of their supremacy traits and recognise that we all live and share one world which contains all the different riches and cultures, and that all countries, people and nations need to work and make an effort to increase the humanity. In short, everyone needs to put their differences aside and start working together for the sake of mankind.

The solutions and values of the past

We constantly live through crisis in our country. Unfortunately, we are now immune to this. To me, environmental crisis is the worst one.

Where is this developed civilisation in the cradle of civilisation being Anatolia? We are carrying various origins of ancestors who established civilisation, history and social codes in this geography. For this reason, I believe Turkey will again reach civilisation and we will become one amongst many leading countries in the development of humanity.

The colonial countries tried their best here too however we didn’t give them the time of day. Because the Ottoman Empire denied their access to the East (infact they lost lands all the way to Vienna), they were steered to the direction of Oceania and Africa.

The strength of being a crossbreed

Nowadays, everyone is crossbred. It is said that Turkey has over 70 different ethnic groups of people. Actually this is a good thing. Because the more people mix, the more they become genetically crossbred which strengthens people. Children that are born from these crossbreeds, generally pick up the strong points of their mothers and fathers.

We experience similar conflicts too. For this reason sects and religious cults were formed. Everyone drew their own path and like people support a football team, today they are voicing their support of religion, a sect or a cult. Essentially, conflicts are inevitable. I do hope that one day all of humanity will recognise each and everyone’s differences and use their different views to richer the world.

The need for capitalism transformation

This topic relates to the whole world. I believe in the future there will be mass differences and transformations in the capitalist system, because the world can no longer handle systems which have been set up purely based on consumption. We are bringing the world we live in to an unliveable state. The problems are obvious. I had written an article regarding this a few years ago. I’d like to remind you of this again: http://serhansuzer.com/en/energy-and-environment-where-is-the-world-heading

The things that actually need to be done are quite obvious too. I had also written an article regarding this: http://serhansuzer.com/en/how-can-mankind-restore-the-balance-in-nature-and-secure-its-future

What more can you say to something so true? Telling us that they had a mission to spread Spanish to the whole world while at the Cervantes Institute placed this speech in our minds as an irony.

A photo taken in the conference hall

We have the same problem in Turkey. We are suffering to produce value added products. With our hazelnut, Nutella became a world famous brand. However, with difficult conditions, we are trying to sell and have our hazelnut consumed with tight margins.

The effects of Russia and Turkish television series

We are coming to the end of the gas diplomacy. Russia must take a position in renewable energy.

Turkish series have achieved what no other could. It helped identify the country in a big way and continues to do so. Records of Turkish series are being broken in Latin America, Middle East, Russia and a few other countries in the world. Not to mention the long emotional stares and slow dialogues in the series. Due to their slow tempo, I choose not to watch Turkish series. Could one series really take 3 hours? So sad. Of course, this is my personal opinion.

The importance of democratic institutes and regionalism

As he said, Uruguay is one of Latin America’s countries that we need to take an example from. I also agree with looking back on your past in order to approach the future with strategies. Forget about the countries, this also goes for the people. People need to start owning their past, and take out the important lessons from these and take the steps to the future based on these.

I also agree with regional development. From Turkey’s perspective, we also need to consolidate and unify with Central Asia, Europe, Middle East and Africa and with the effect we have there, we need to increase and double our effect. America is made up of 20% Hispanic people. Knowing Spanish served me rather well in the years I was in America. Infact they make jokes about this and how Latin America’s Miami is the closest city to the US. Even in petrol stations in Miami, you will find signs hanging that say “we speak English”. Spanish is spoken in 22 countries and has become a language that is spoken by over 500 million people. Personally, I am very honoured that I had learned to speak Spanish in the past.

This is so true. Latin Americans look a lot like us in both negative and positive aspects. And unfortunately with us, a majority of the people are not aware of this; they wouldn’t see the reason why littering on the ground would be a problem. We need to revise the education system from start to end. Especially the education of parents and education of teachers is very important. For this reason I believe that the people working in government need to carry the traits of quality for a positive transformation.

After this main speech was made, the person in charge of the Cervantes Culture centre, Miguel Grajales was next to speak. He thanked all the speakers in the room. To wrap up, our ambassador made the final speech. Although the event took over 2 hours, the participants all hung around till the end and actively participated. It was a successful event.

To do something like this with people from Oceania who resemble us in so many ways is inevitable. As I had mentioned in my last article, as the Honorary Consul of Costa Rica, I am trying my best to show our country the good and colourful culture of this country. Of course this works both ways. In the same way, we will represent and show our country to Costa Rica. I will share the details of this in the future.

Finally, as I mentioned in my last article, there was a change with Procomer (Costa Rican foreign trade agent), Turkey’s representative. Ali Natour, who held this position for two years, passed on the baton to Ferhat Deger. I had wished Ali all the best in his new life and endeavours in my previous article. I also wish the best success for Ferhat in his new career path.

I would like to finish my article with an introductory video of Costa Rica. You can find the video at the end of the article. Anyone who would like to visit this beautiful country can obtain further information from our Honorary Consul website. Our address is: www.costaricaconsulistanbul.com

Anyone that also has a question can also reach us via the contact section of the website.