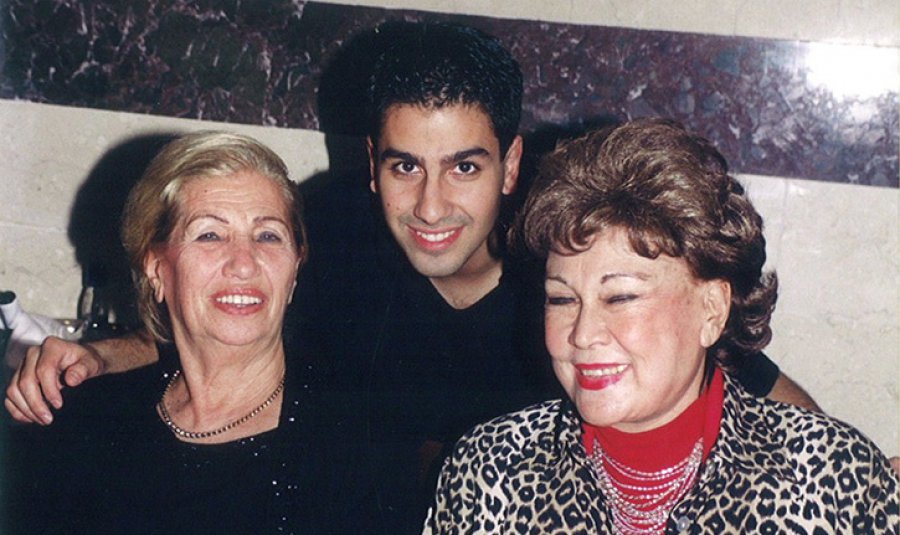 I have very distinct memories about Ms. Ülkü in my mind. First of all, I’m very sorry to lose someone I love and respect. Life is like this.​

Everyone has a certain time. When that time is up, there is nothing anyone can do, it is over. However, when I think about how Ms Ülkü passed away, I get very sad. We lost Ms. Ülkü, the adopted child of one of world’s most important leaders – Mustafa Kemal Atatürk, in a traffic accident (Those who don’t know about Atatürk can read about him from the following link: http://www.kultur.gov.tr/EN,31350/biography-of-ataturk.html).

At the time of the accident, I was in San Antonio, USA for business. When I learned about it, it was too late. As soon as I heard about it, I called Nilgün Umarer, the assistant of Ms. Ülkü who was very close to her for years and whom I admire with her devotion. When she heard my voice, extremely sadly she said: “Unfortunately we lost Ms. Ülkü.” This was a rude awakening for me in a random place near the Mexican border in USA. Then, we talked about Ms. Ülkü, about the accident and about what will be done from that point on. The funeral was going to be held the next day. Frankly speaking, I’m sorry that I couldn’t attend her funeral. I got the news from my mother and Ms Ülkü’s assistant, Ms Nilgün. Finally, I decided to write this article.

Ülkü Çukurluoğlu Adatepe was born in November 26, 1932 (By the way, our birthdays are the same). She’s the youngest of Atatürk’s adopted daughters raised to be examples to the Turkish society and the world, whom include people like Sabiha Gökçen, the world’s first woman fighter pilot. Up until she was 6, Ms. Ülkü lived with Atatürk in the Çankaya Mansion. Before Atatürk lost his life when Ms Ülkü was 6, she accompanied him in his country travels and became the symbol of his love for children. While I was talking to her one day, because of my curious character, I asked her about these:

Serhan: Ms Ülkü, up to what age did you live with Atatürk?
Ms Ülkü: Until I was 6…
Serhan: Do you remember those times since you were 6 years old? Do you clearly remember Atatürk?
Ms Ülkü: I remember him very clearly. My memories with Atatürk are the most important memories of my life.
Serhan: Okay then, I’ll ask you something everyone wonders: What kind of a person was Atatürk?
Ms Ülkü (all of a sudden putting on a serious face): This is very hard to define with words. There are lots of things to say about this matter but I can say that he was a very different man from everyone else. He was a man whom everyone around him saw as a leader and whom everyone was attached to with great love and respect. He means the love of a father to me.

I sensed that she got emotional all of a sudden and she was lost in her thoughts, so I didn’t want to talk more about this matter and I changed the subject.

Ms Ülkü is the daughter of Ms. Vasfiye, Mustafa Kemal Atatürk’s mother’s – Ms. Zübeyde’s adopted daughter, and Mehmet Tahsin Çukurluoğlu, a French teacher and station master. When he learned that Ms. Vasfiye and Mr. Mehmet were to have a child, whether it was a boy or a girl, Atatürk wanted it to be named Ülkü. When she was 9 months old, Atatürk took Ülkü to the Çankaya Mansion next to himself and after she grew up a little more, he took her with himself to his country travels. While I was talking with Ms. Ülkü’s assistant about the past, she told me a memory of Ms. Ülkü about Atatürk:

“One day, little Ülkü got very sick. Worried about little Ülkü who caught typhoid fever, Atatürk wanted to visit her in her room in the Dolmabahçe Palace. The late professor, Mr. Neşet Ömer, told him that the sickness was contagious and that he absolutely shouldn’t go inside the room. As an answer, Atatürk said: “Doctor, save this child. I can’t live if she dies.” Not listening to the advice, he then entered little Ülkü’s room and cheered her up. Later on, little Ülkü survived the disease faster than expected.”

Ms. Ülkü has lots of memories about Atatürk. Put everything aside, they have a life experience together which can be seen in photos and videos and which has affected our lives. For instance, at Atatürk’s request, the pictures of Atatürk teaching letters to little Ülkü took place on the cover of the famous alphabet which was used for years. I would like to share with you a video of little Ülkü with Atatürk:

In this video clip taken from the documentary named 5 past 9 which is about Atatürk’s last years, we can see the pleasant times Ms Ülkü and Atatürk spent in the Florya Mansion. Speaking of the Florya Mansion, I have to tell about something that Ms Nilgün told me. In honor of the renewal and reopening of the Florya Mansion where Ülkü Adatepe passed her childhood in April, 2008, a dinner was organized special to her one week before the opening. During dinner, Ms. Nilgün told how impressed she was with the magical atmosphere of the mansion and told that she felt the presence of Atatürk there. Looking sad and meaningful into the eyes of Ms Nilgün, Ülkü Adatepe smiled and told her: “Atatürk is already always with us. He feels everything and he is watching us.” At that moment, among the bewildered looks of all guests, the rose leafs from the rose tree right behind Ms. Ülkü started to fall on the table over her head. During the silence that lasted about two minutes, everyone was thinking the same things.

I can’t remember when exactly I met Ms. Ülkü, but I remember her since childhood. I think our acquaintance has its source in my grandfather. My grandfather was a strong Ataturkist. When he was managing Pera Palace Hotel, he would always invite Ms Ülkü to important events, he would host her and her family. I remember Ms. Ülkü from some of these events in the Pera Palace Hotel and I remember meeting along with our families. Hereby, I would like to share with you the photo below. In this photo, you can see Ms Ülkü, who has a special place in my heart, my grandmother, one of the most important women in my life and the 24 years-old Serhan. The photo was taken 11 years ago in my grandfather’s hotel in Alaçatı, Çeşme and it was one of the pleasant memories we had.

She was very warmhearted and she was someone who cared about others around her. She was so close that she told my mother and some of the other women around her: “Let’ marry our Serhan to a well-educated, good-hearted and a beautiful girl. Don’t you know anyone like this?” Of course, I heard about this conversation later from my mother and again from those who were close to her and I took it with a smile on my face. I said: “Thanks to her, she thought about me.”
In her last days, we talked about what can be done for “Atatürk’ün Ülkülerini Yaşatma Derneği” (Institution to Keep Ataturk’s Ideals Alive). She had some problems about this institution. I told her that I’m ready to give my best support and I told her that some changes in the team should be made so that the institution can turn into a more active establishment and that professional managers should be appointed. Because she didn’t have doubts about my good will, she told me exactly the following: “Oh Serhan. I wish I could do it. But how can I discard these people who I call friends?

After this conversation, I unfortunately couldn’t do anything, because she was stuck between reason and emotion regarding matters about the institution. On her behalf, I went to talk to a few places about the “Little Ülkü” museum she wanted to open. However, these attempts remained inconclusive because of certain reasons.

Lots of people have different comments about Ms Ülkü these days. I want to tell you about my own perspective. What was important to me about her was her personality. First of all, she had a personality which can be hard to find in these days. She was genuine. In other words, she was very straight forward. She never spoke badly about anyone and she wanted to be helpful to the people around her. At the same time, she wanted to enjoy life. Like Atatürk, she didn’t hesitate to dance in the events she attended and she knew how to amuse herself.

Probably because she was a clean hearted woman, I believe she shaped her own destiny herself. When I talked to her assistant, she told me two more stories that got me goose bumps. One of these stories took place 2 years ago on the flight from Ankara to Istanbul. The plane went into a serious turbulence and due to the quake; everyone panicked, screamed and was weepy. The assistant asked Ms. Ülkü, who was extremely calm:

Ms. Ülkü, how can you stay calm in such an environment?
Ms Ülkü: It’s not a big deal. Aren’t we all going to leave this world at some point? My mother died in a traffic accident. A traffic accident is of course a hard death but if you think about it, you quickly die without suffering at all. So I hope God gives me an easy death like my mother in a traffic accident.
The assistant: Ms Ülkü, please don’t talk like this. May God give you a long life! God forbid!
The second story she told me took place in the New Year party they celebrated at the end of last year. Ms Ülkü organized this party to be in a hotel. However, the hotel manager later on cancelled this party, saying that they didn’t have room for it. Ms Ülkü had to throw the party in her house and she was saying to the people around her: “Don’t care too much about this cancellation. Let’s all enjoy ourselves. This is my last New Year party anyway.”

Unfortunately, it really was her last one. Before the accident, she had broken her shoulder and she had to go to Ankara for the treatment. For this trip, a vehicle was given to her from the President of the Tourism Association. On August 1, 2012, while turning back to Istanbul from Ankara, on the Sakarya-Akyazı road of the TEM highway, the car hit the barriers and rolled over, because the driver lost control of the car. Ms Ülkü, who flew out of the window and hit her head to the barriers, lost her life. Similar to her mother’s destiny and as she sensed.

Ms Ülkü, may God rest your soul and may God give patience to your family and those you love. There are two things I will do for you from now on. I will do them worthily. Rest in peace.