Witnessing History at the UN (3) 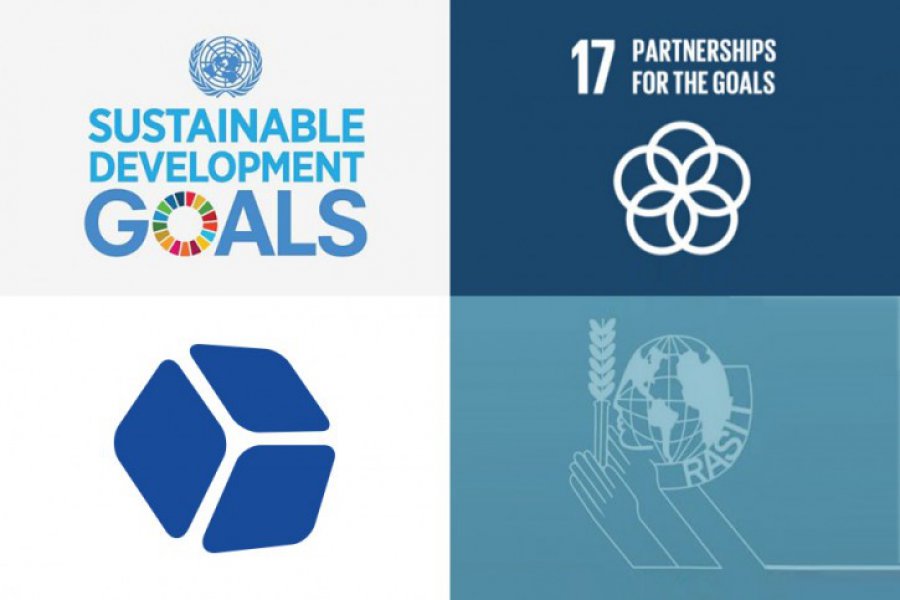 Last week, after having been at the United Nations in April for the Paris Agreement signatory ceremony, I was there once again, this time to give a talk. “Transitioning to Sustainable Energy without leaving anyone in the world behind” was the subject of my presentation at the “Agora” event.  My experiences leading up to the event, the exchanges during my presentation and the conversations afterwards made for an enjoyable time in New York.

The event came about as the result of a conversation with Iraqi princess Nisreen El-Hashemite. During the Princess’ visit to Istanbul we were evaluating the UN Paris Agreement when she said she would like to arrange an event at the UN on sustainability. “If you want to hold such an event it should cover new ground, something that hasn’t already been done by others,” I responded. “From what I’ve seen, politicians, bureaucrats and NGOs always take the floor when events on sustainability and renewable energy are held at the UN. In fact, advances in those areas really come down to technology and the realization of projects. There would be nothing much to discuss if it weren’t for the execution of projection and the advances made in technology. That’s why I think you should invite as a speaker at the UN someone who is actually involved in this field and can provide solid information to the audience.”

Princess Nisreen said that was a great idea and asked if I would be able to offer my support. When I said I would be happy to do all I could, we started discussing the details of the event. I then contributed to the event as best I could.

A week before the event, which was held on Monday, June 6th, Princess Nisreen visited Istanbul again. At dinner one evening I met ten-year-old Talya, who was slated to speak at this event concerning the vision of children, and her parents. Tayla and I hit it off immediately. An obviously clever and well brought up girl, Talya also impressed me with her confidence, the way she kept posing questions like a grown up, and her ability to comment and expound on the matters under discussion at the table. We were talking both in Turkish and in English for the benefit of the foreign guests at the table. I learned that Talya’s proficiency in English at such a young age was due to her education at one of the Açı Schools, which obviously have high standards and have given Talya a brilliant education.  I’d never heard of the schools before and would like to congratulate their founder and administrators.

On June 5th I flew to America. That same day, I met with the other speakers and with Richard, from the team responsible for the organization, RASIT, to discuss the details of the event. The following morning, Princess Nisreen arrived. We then met with Talya and her family. The conference was set to begin at 15:00. We were told to meet in front of the UN building at 14:15. Until then, we snacked in the lobby of our hotel directly across from the UN. I was chatting to Talya again when I couldn’t resist turning to her family and telling them how lucky they were to have such a sweet child. Her mother jokingly responded, “Yes, my daughter is sweet, but it’s been no easy task to raise her.” “Talya is a Gemini,” Talya’s aunt chimed in with,

“What’s wrong with being a Gemini,” I wondered aloud. “Well,” she said, “they’re a bit moody. She changes from day to day.” When Talya saw me laughing she was more than ready with a riposte that belied her age and produced a round of laughter at the table: “What am I supposed to do? It’s my mother’s fault. She shouldn’t have had me in June.” Talya’s reaction reminded me of something I’d read in Zaytung, the Turkish news satire site: http://www.zaytung.com/haberdetay.asp?newsid=281883

All joking aside, as red-headed Talya, who reminds me of someone I know, chattered away so sweetly, the thoughts running through my head were: “I’d like to have a daughter like Talya. An intelligent and well-educated girl who will grow up into an adult that is also good-hearted, loyal, honest, well-intentioned, empathetic and conscientious. To me, anyone whose heart and head are in the right place has superior qualities. It’s also important to have a good circle of friends. Families try to offer the best guidance and opportunities circumstances allow, but when a child runs with a bad crowd and begins to be influenced by them, serious mistakes are bound to be made, no matter how bright the child and no matter how much potential she has. I wish her a wonderful, happy life in which she usually makes the right decisions.”

After lunch and the chat I described above, we headed for the United Nations and were able to enter the building with our accreditation cards. We waited for the conference in the assembly room where our event was to be held to conclude, and then entered the room. Everything had been organized. We took our seats.

The first speaker was the founder of Agora, Princess Nisreen El Hashemite.  Talya was one of the early speakers, and gave an incredible talk. When I was my turn, I gave a 20-minute presentation. A link to the three-hour conference can be found at the link below (Talya’s talk begins at the 20-minute mark and mine at 37.30.): http://webtv.un.org/watch/transforming-the-world-through-sustainable-energy-for-all-leaving-no-one-behind/4930324186001 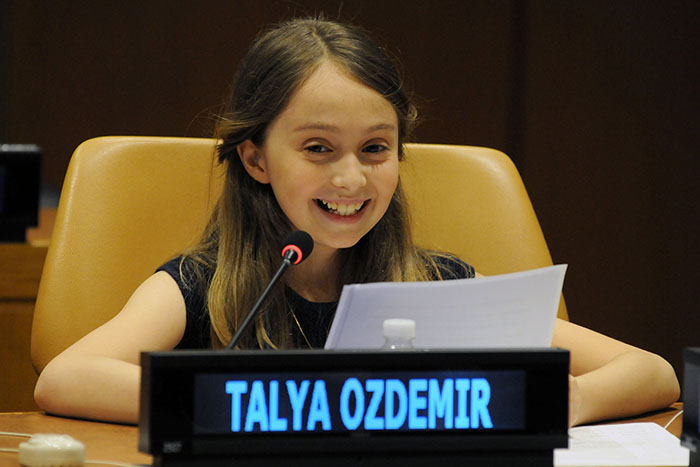 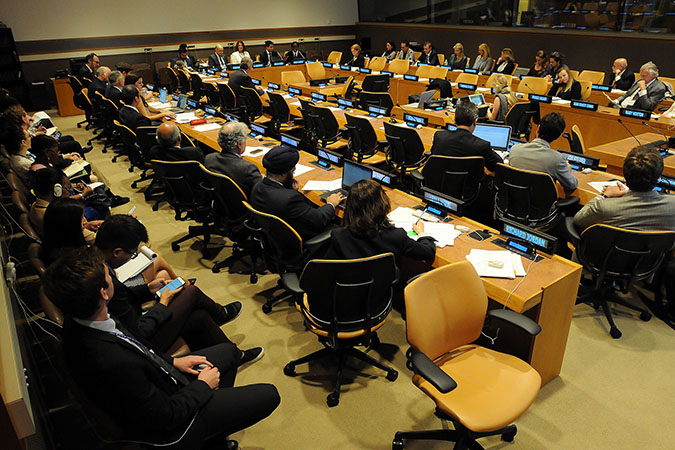 To sum up my presentation, I began by explaining in broad terms the philosophy behind sustainable energy. There is a constant and ongoing struggle to seize control of fossil fuels such as oil and natural gas and mankind is even prepared to wage war for the resources found above and below the ground. However, the sun belongs to all of us and harnessing it as a source of energy naturally leads to peace and democracy in the world order. Furthermore, when technology is used correctly, renewable energy plays a major role in protecting and preserving the environment. 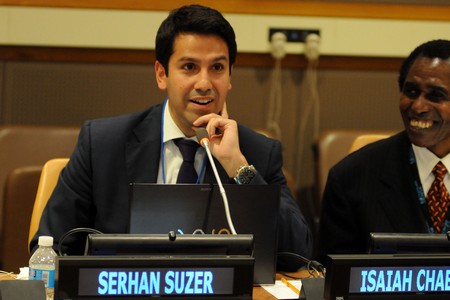 In some sections of my talk I referred to the 17 Sustainable Development targets outlined by the United Nations. There targets can be found at this link: http://www.un.org/sustainabledevelopment/sustainable-development-goals/

Following that I explained, respectively, the reasons for preferring renewable energy, different kinds of renewable energy sources and their related technologies, application models concerning these sources and their technologies, how it was possible for both the world and Turkey to achieve a 100% renewable energy target, and the sort of vision that must be set forth in order fight climate change. I said that this vision means countries will be forced to change themselves in the future, and cited specific areas of change as below:

Last of all, I related our collaboration with the Royal Academy of Science International Trust (RASIT), an organization that strongly supports women scientists. We have two joint activities planned. The first is a continuation of the Agora program we launched together, in which representative of private sector, NGO and public organizations that produce the technology for renewable energy and sustainability projects speak at the United Nations. The second is the launching of an intern program. We and RASIT will bring together interns from around the world and provide them with training, taking care to promote gender equality when choosing an equal balance of female and male candidates for the program. 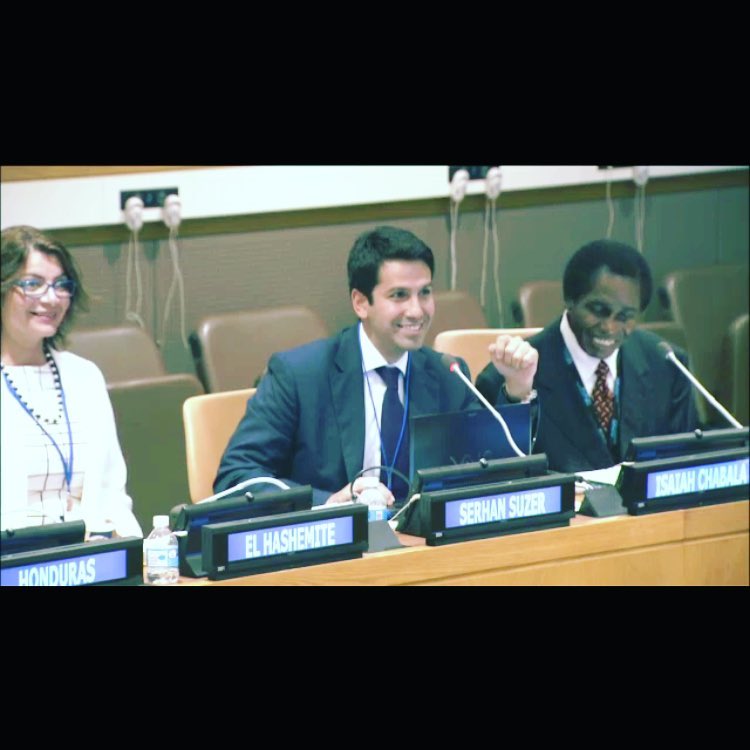 All completing all the talks within a three-hour period, the classic post-conference conversation began. The event finished at 18:00 and it was 19:30 by the time we left the United Nations building. Separating from the main group, Princess Nisreen, Talya and her family, and me went to the St. Regis hotel to eat. Thus, the day concluded with an enjoyable dinner. 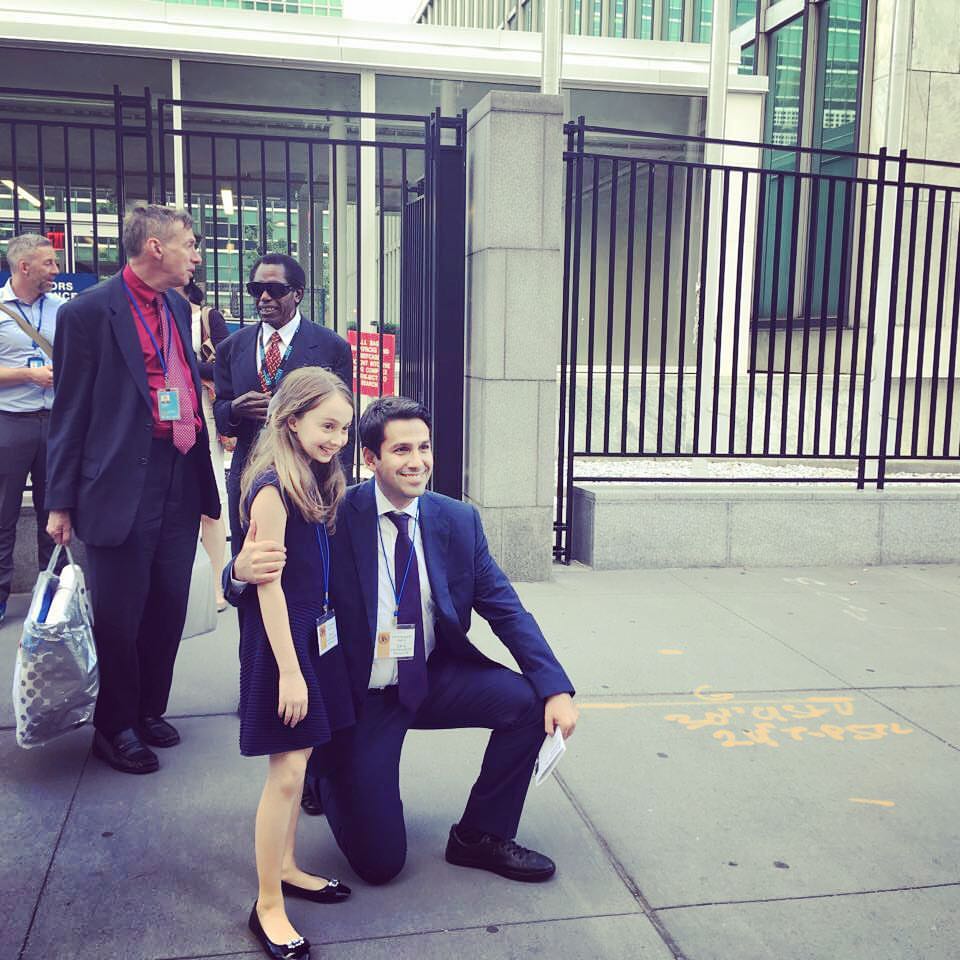 Below, you can find links to news sources and visuals related to the Agora event:

In my next post I will write in detail about the Paris Agreement ceremony, something I have been unable to do for quite a long time.

Until we meet again at my next post, stay well..