I am the first passenger of the new airport! 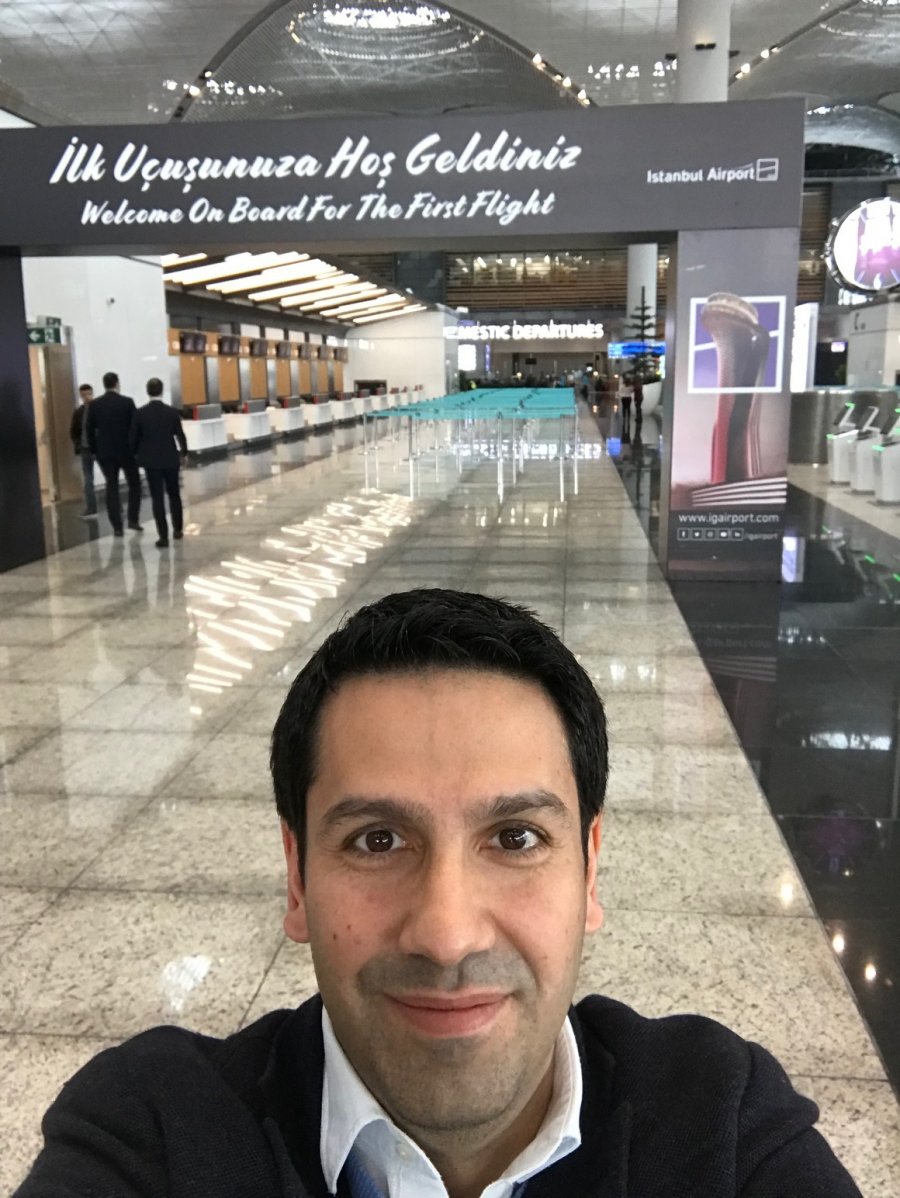 As a result of fate, I was the first passenger to board the first flight departing from the new Istanbul Airport even though I made no effort to achieve this. Here is the story of my “by chance” historical feat…

My trip to Ankara on Saturday became a sudden necessity by urgency.  After finishing my morning meetings at Solarex (solar energy fair), I had to board the first plane I found in the afternoon. We tried to arrange the flight from Atatürk Airport as Solarex was held at CNR Fair near Atatürk Airport. However, the message we got was ‘There are no longer any flights from Atatürk, there are flights from the new airport’. Instead of going to Sabiha Gökçen, I arranged my flight from the new Istanbul Airport at 2pm, which is on the European side.

The night before, I was talking to my driver Mr Münir about how to organise the logistics. This was the dialogue between us (my driver Mr Münir started the conversation):
- All the news channels are saying that the roads will be closed Mr. Serhan. How are we going to do this? It would be better if you go from Sabiha Gökçen. It is not clear what will happen at this airport.

- It does not make sense to go to Sabiha Gökçen from Atatürk Airport. The new airport is much closer.

- The navigation says its 31 km. That too is far away.

- Yeah, but there's the bridge traffic for one, and the other one is much smoother.

- They say they’ll be closing the roads off to one lane. I don't think we should take that risk.

- (Me being the usual risk taker) If we do not have a problem in our morning appointments, then this is the right way. I can't go to Sabiha Gökçen from CNR. (After receiving confirmation of appointments) I will take the risk. We’ll see what happens tomorrow. We’ll leave the house tomorrow at 8am.


A parking problem at Ataköy Marina

We did exactly as planned Saturday. We had breakfast at 9am at Happy Moons at Ataköy Marina with EPC (engineering, procurement and construction) company based in Mersin. In the meantime, I kept saying to those who run Ataköy Marina: “There’s construction here all over again? The roads are so unclear. Tidy it up for God's sake. The valet parkers in front of the restaurants also do not let anyone park. We're sick and tired of these valet parkers acting like they’re mafias. Just so they can earn a buck of two, why do we have to associate with these people. Do the planning properly. How can you not have a proper parking facility in such a place? How do valets just harass those who want to wait here?

Anyway, I digress. Just remembering that makes me angry.

After Ataköy Marina, we went to the CNR fair where Solarex was located. There were no road blockages on the way. Although a little late, we were able to attend the Solarex conference titled ‘Energy Storage’ (technology, innovation and industry talk with the EPC company). You can find the details of this event at https://www.ibesalliance.org/index.php?id=146.


Headings from the conference

Of course, as a Turkish classic, we were late but the conference was also delayed, so we did not miss much of anything. The first 3 conversations were ones in particular that I wanted to listen to. These were:

Understanding the Value Stream in Energy Storage: A Holistic View of the Past, Present and Future.

Afterwards, we met with the IBESA CEO Markus Hoehner. I then bolted out of Solarex conference at around 12.30pm

While on our way, my driver who was trying not to miss the exits following the navigation hesitated at a few crossroads and this is the conversation we had (I started the conversation):

-The huge sign in front of you says Istanbul Airport. You're still trying to find your way around with navigation (I actually like that fact that he uses the navigation. Because I worked really hard to get him used to using it. I only said this to stir him a little).

-If we miss the exits at any point here, you’ll miss your flight, sir. I'm just using the navigation to be sure.

-Alright then. Carry on watching out for both.

The road was travelling very smooth. Our reverse logic was spot on. Those who were in the vicinity of the airport, especially in Yeşilköy, had got off the roads knowing the airport was being moved. Therefore, the roads were empty. We immediately connected to the relevant highway and arrived at the new airport within 25 minutes, at around 1pm.

I went through the first security checks rather smoothly. My first impression was: the airport is really stylish. It suits our Istanbul. As we’ve been told, it had no beginning or end. After entering the airport, I took a photo for keepsake. The following shots were taken: 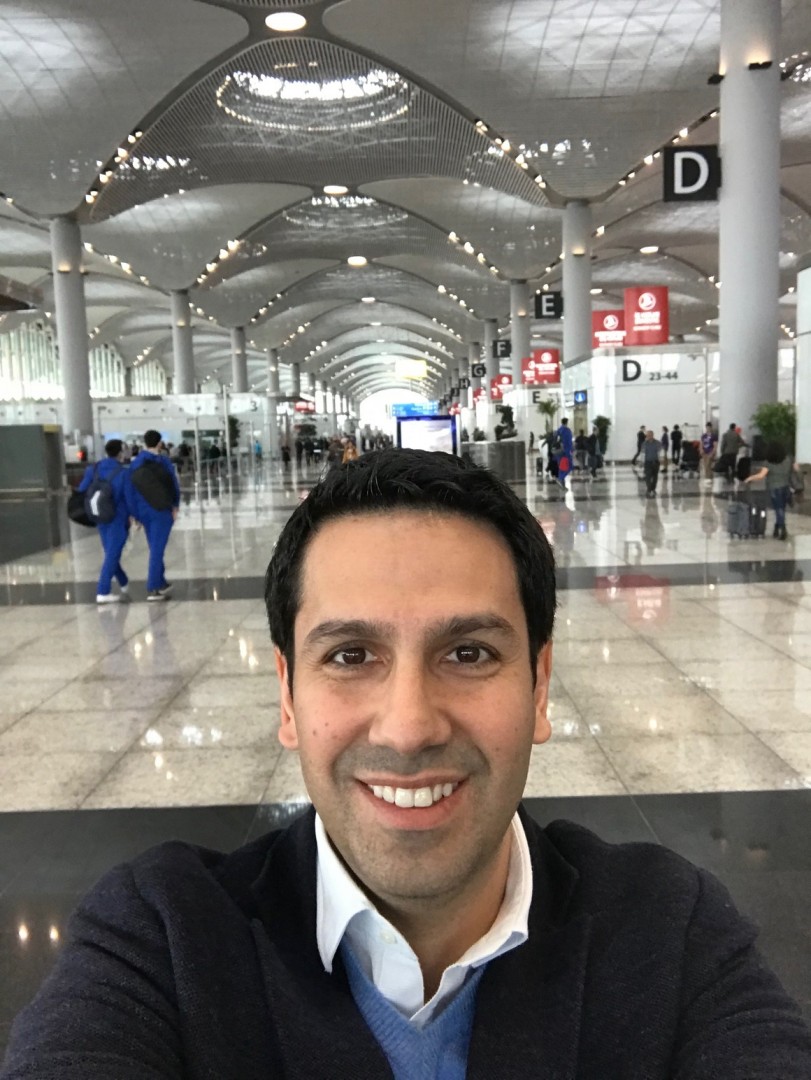 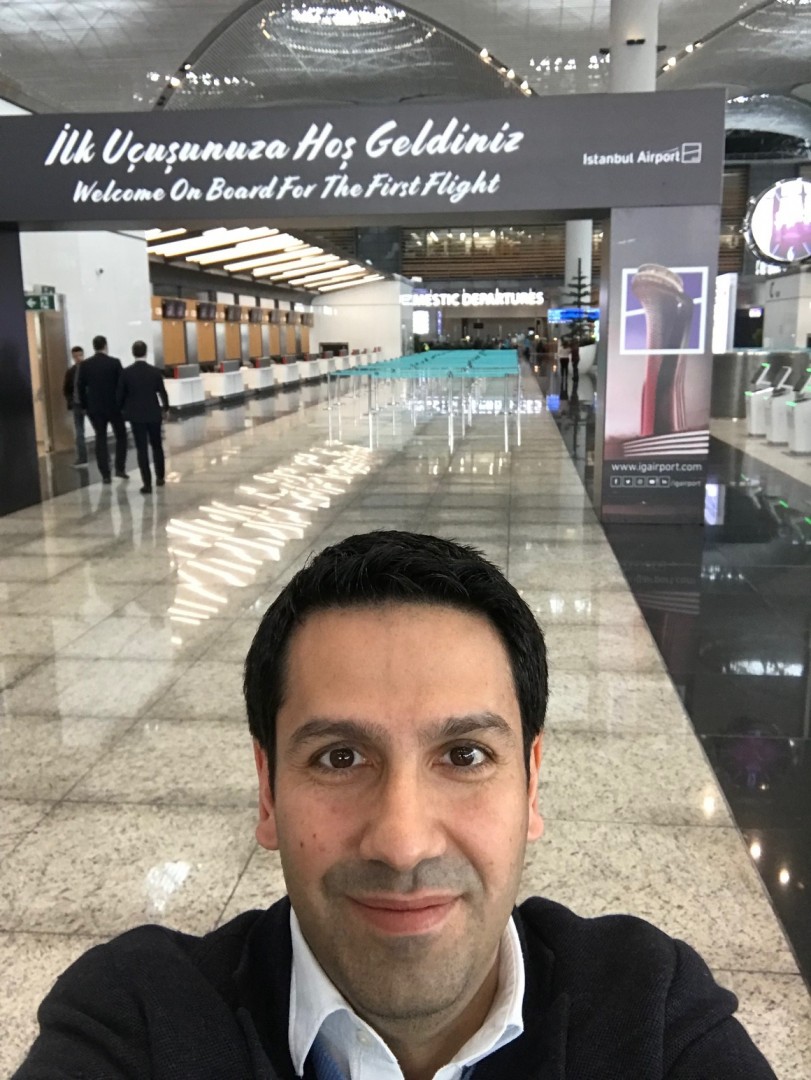 I wanted to share this photo of the information boards just so you can have an idea: 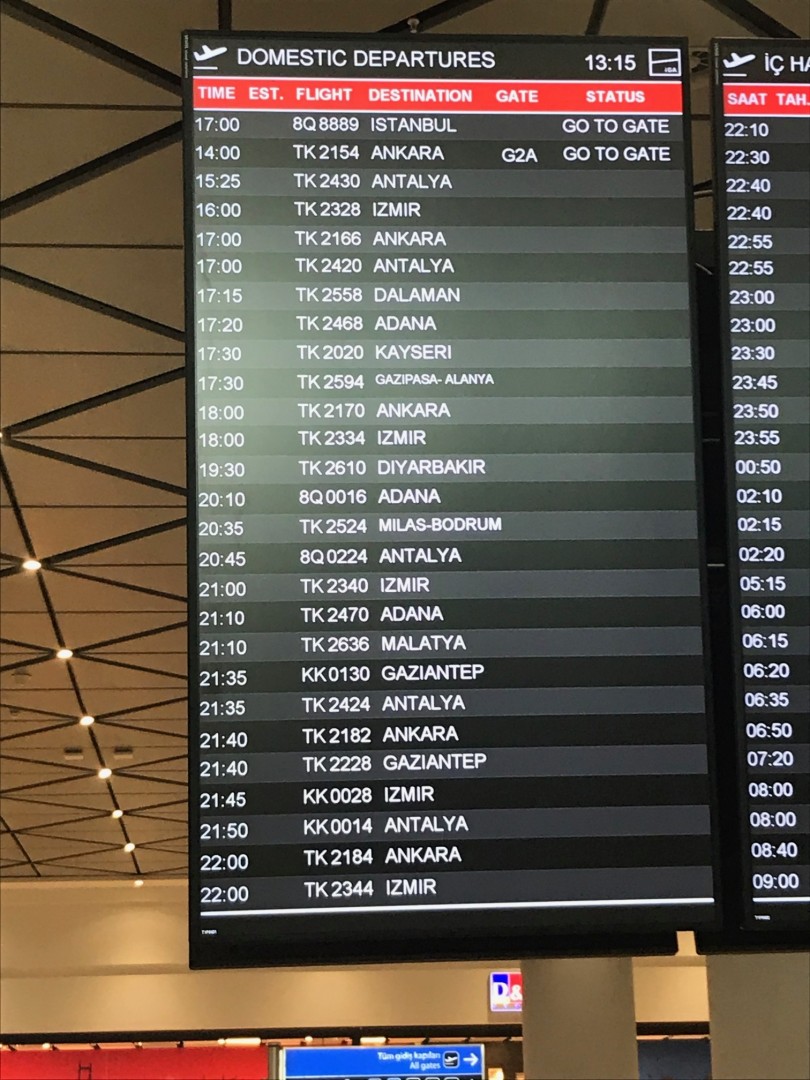 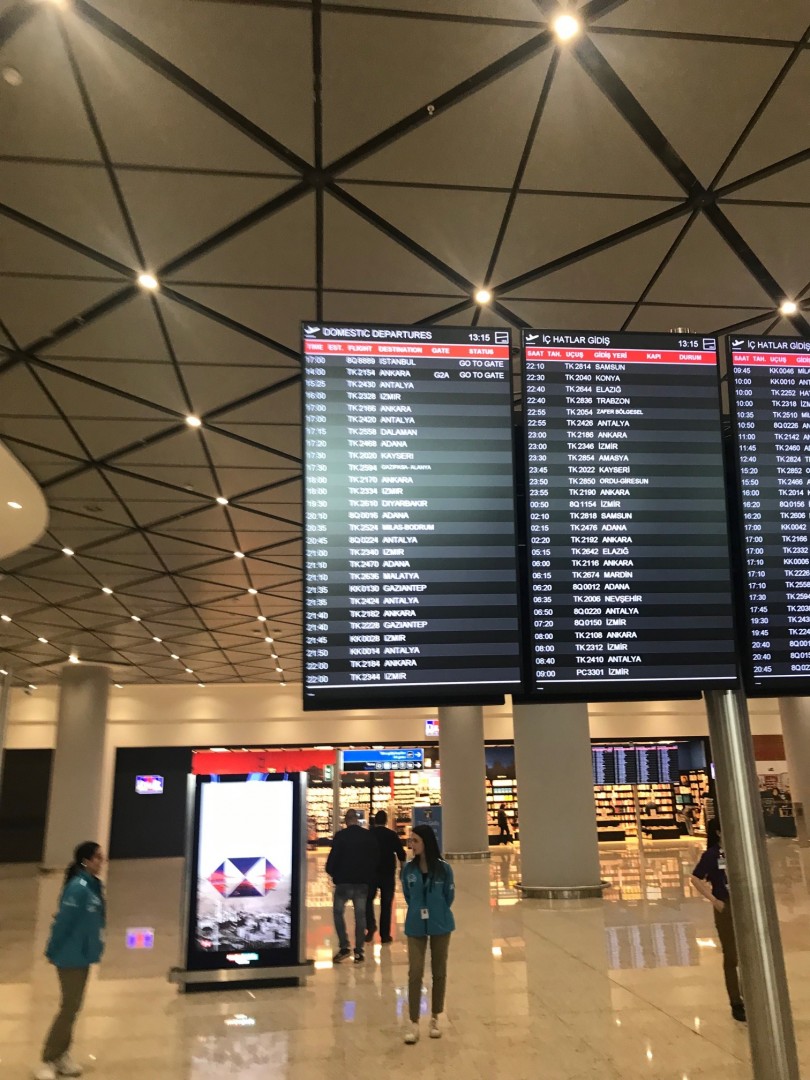 There is a huge distance between the first security and the second security points. This was no problem for someone like me who liked to move. I reached the second point by taking quick steps. Then I took a picture of the corridor I came across at that point: 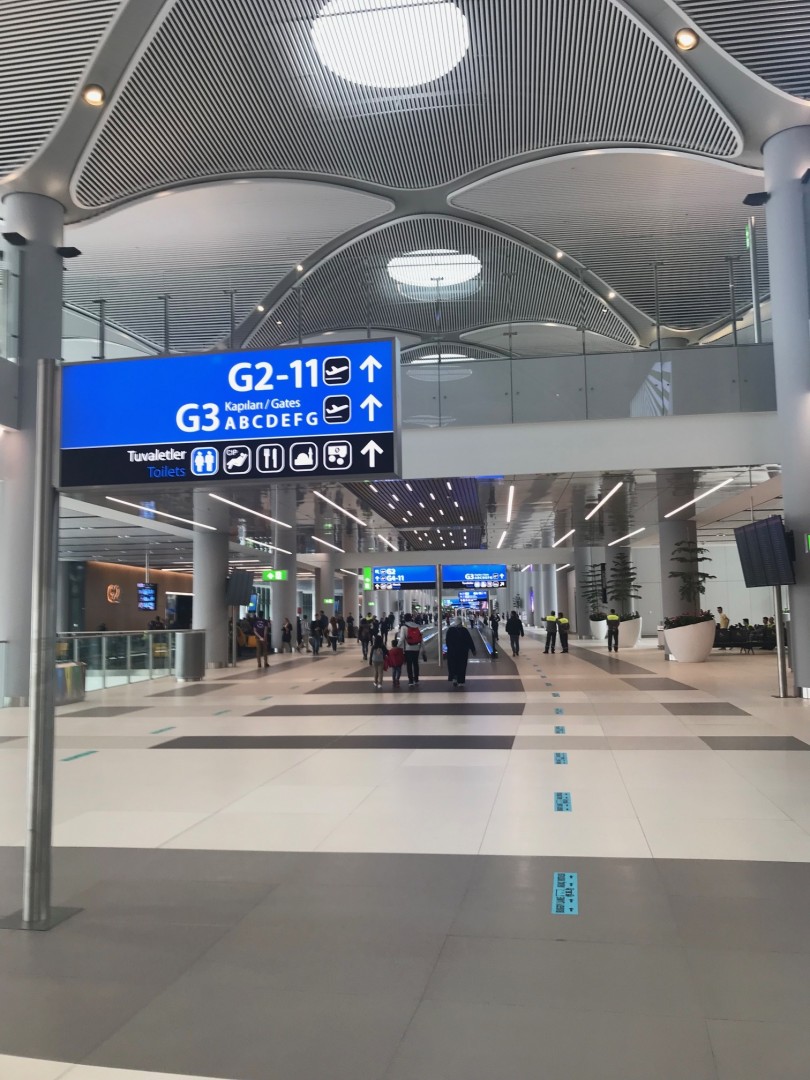 It was like 1.20pm when I got to the door. There was a massive line. 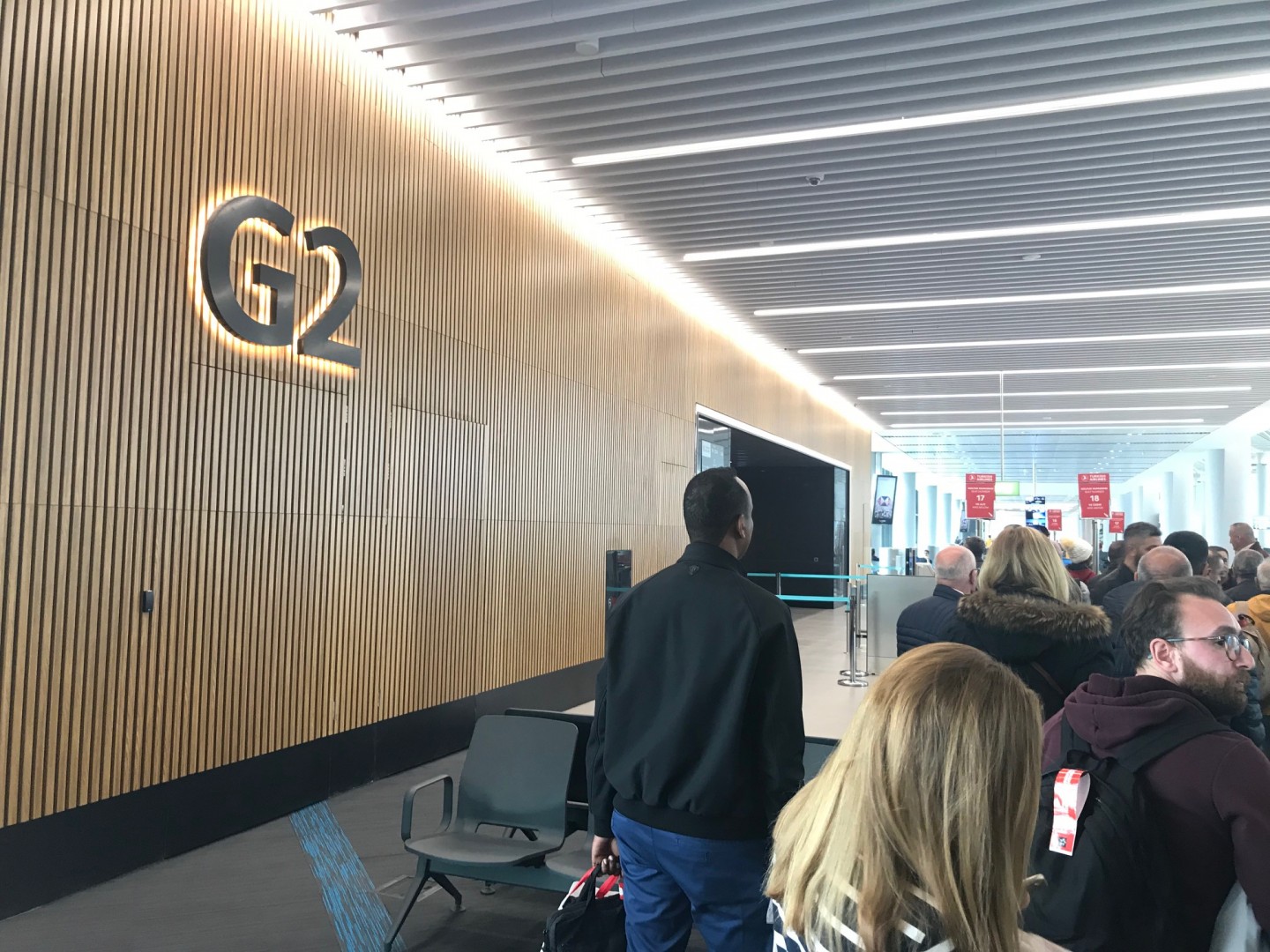 Beginning of a huge line 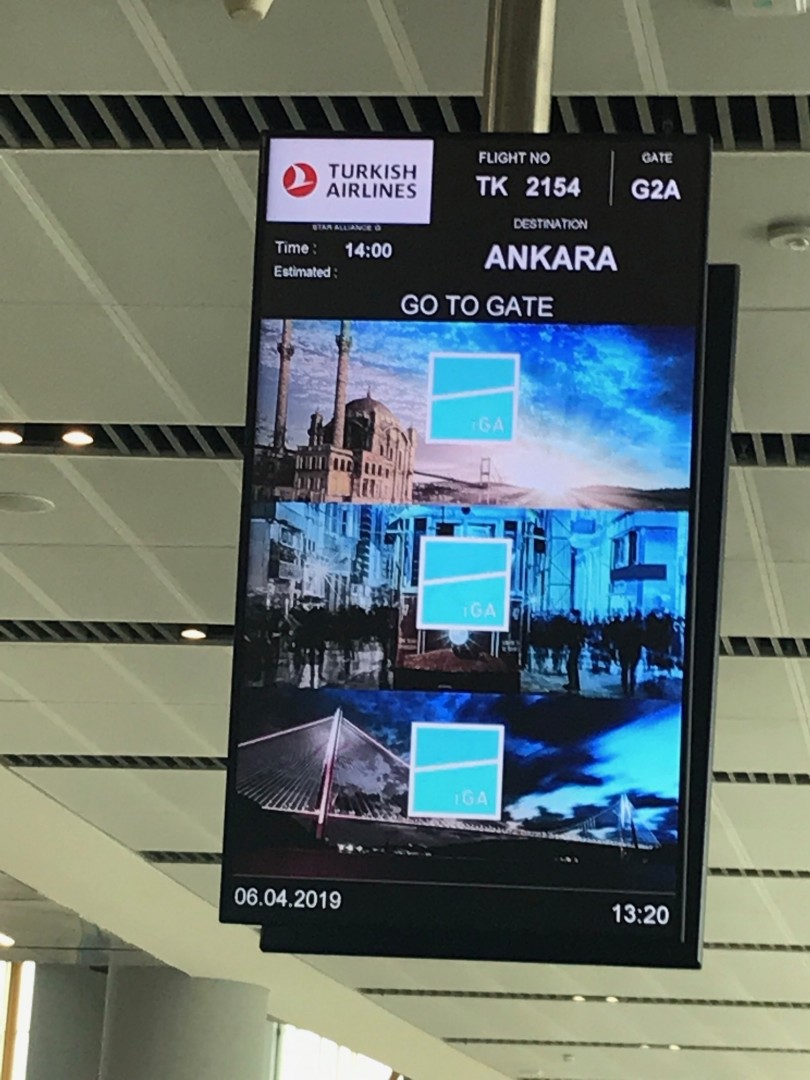 The dashboard above our area

I went to the reception desk and asked, “When are you going to start boarding us? When she said “In about 10 minutes”, I sat down in an empty spot. I opened up my laptop. I started to work. 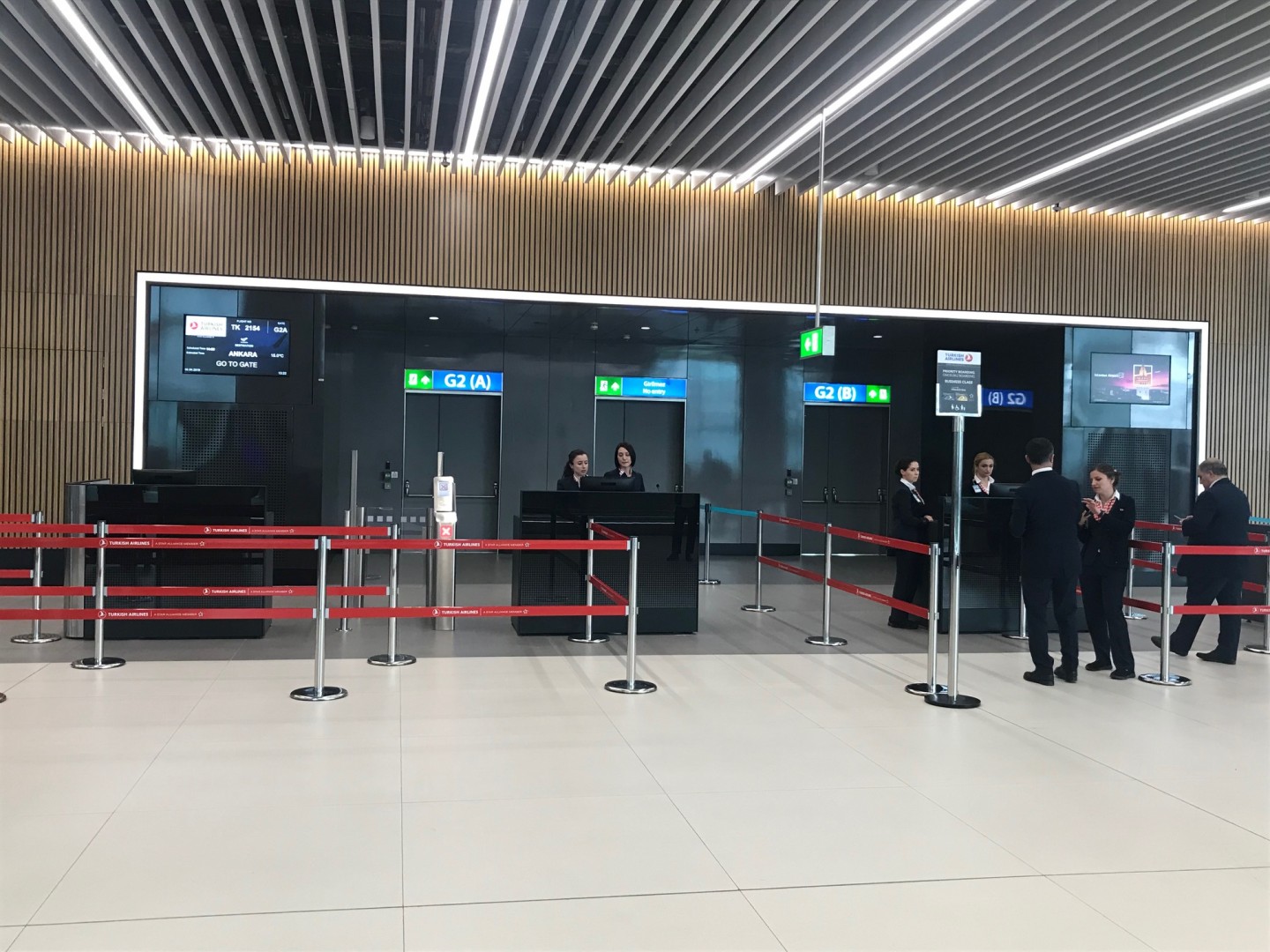 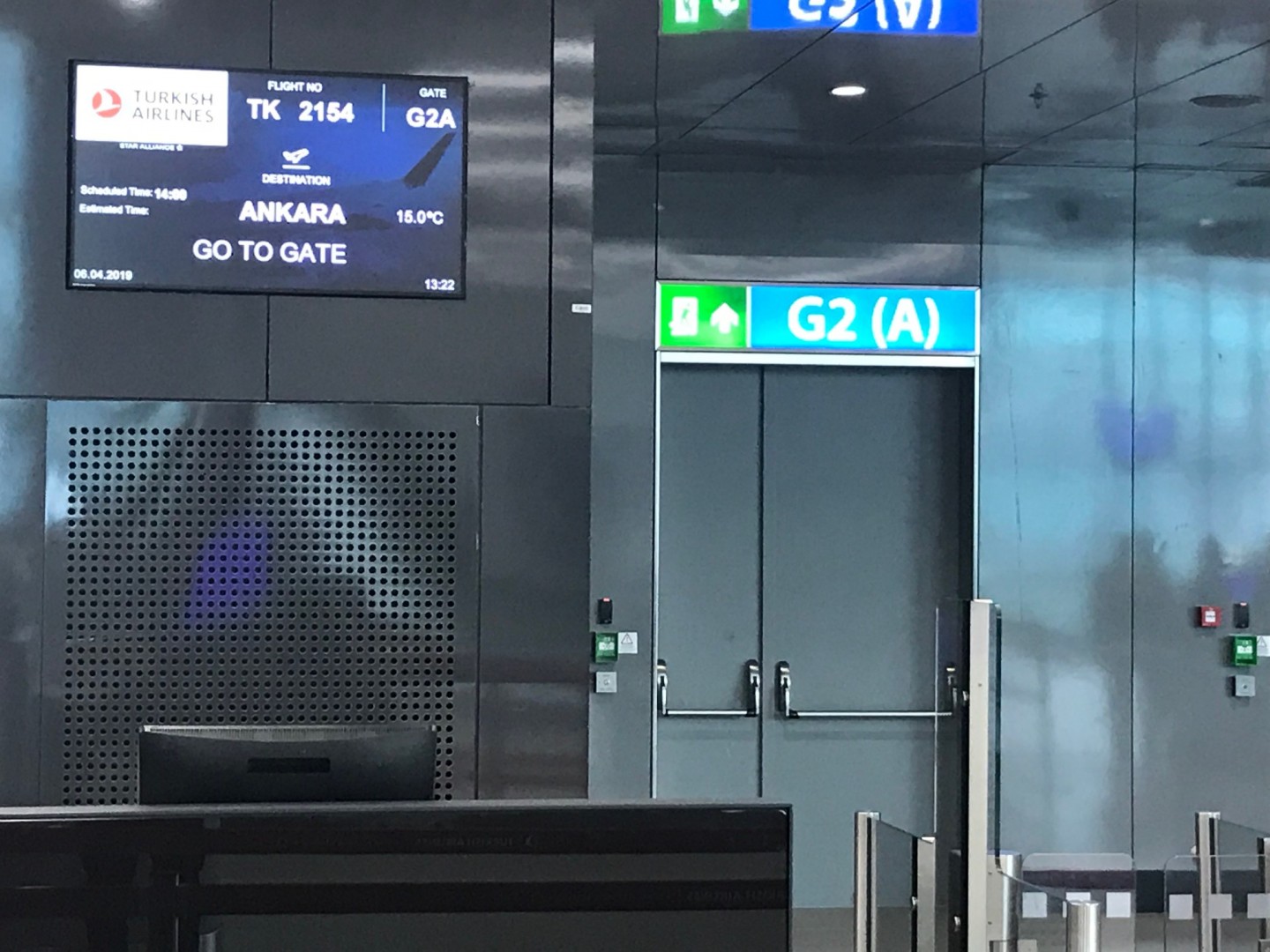 The information board above the counter

In the meantime, I managed to watch our plane. Here are those photos: 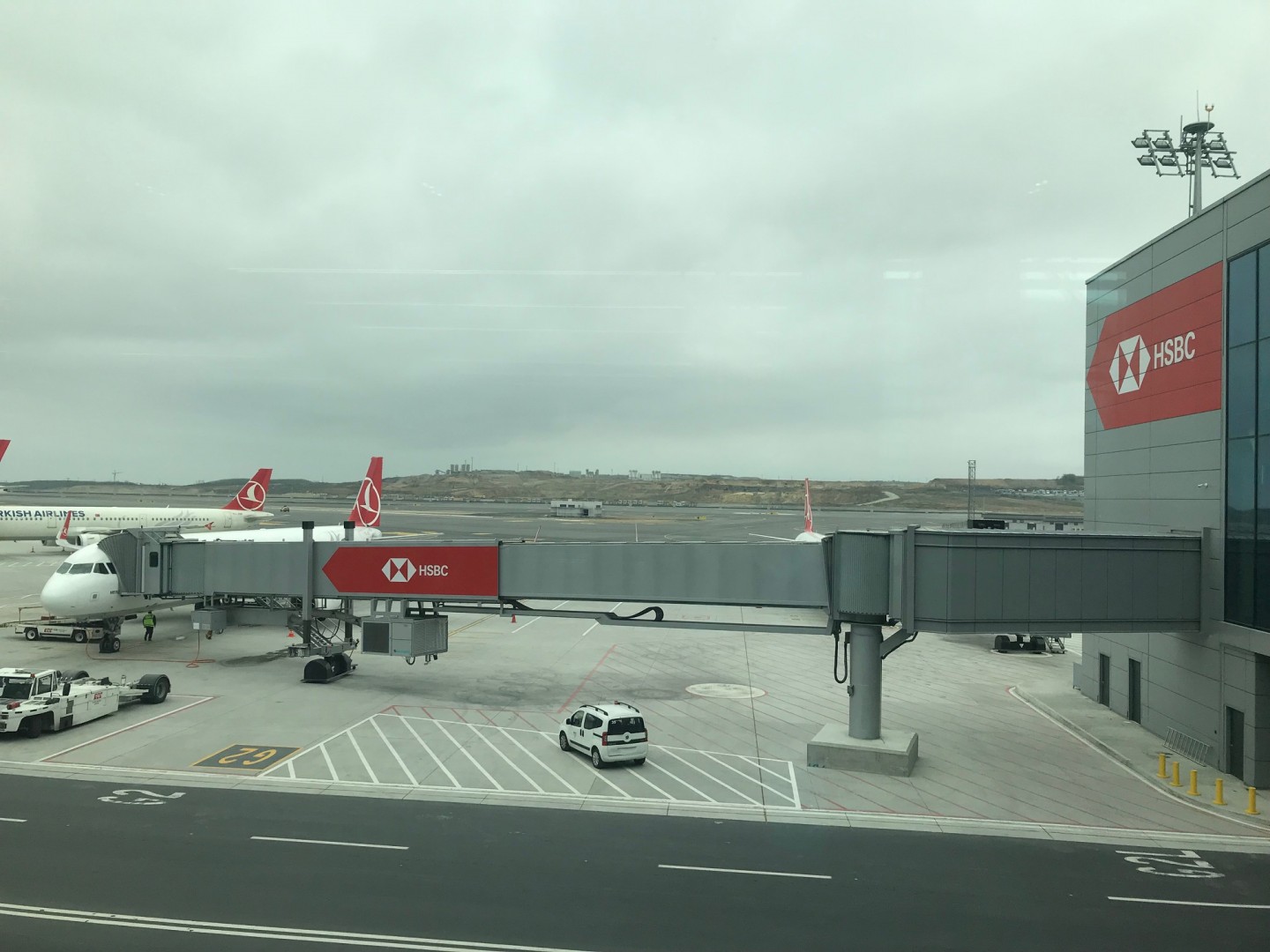 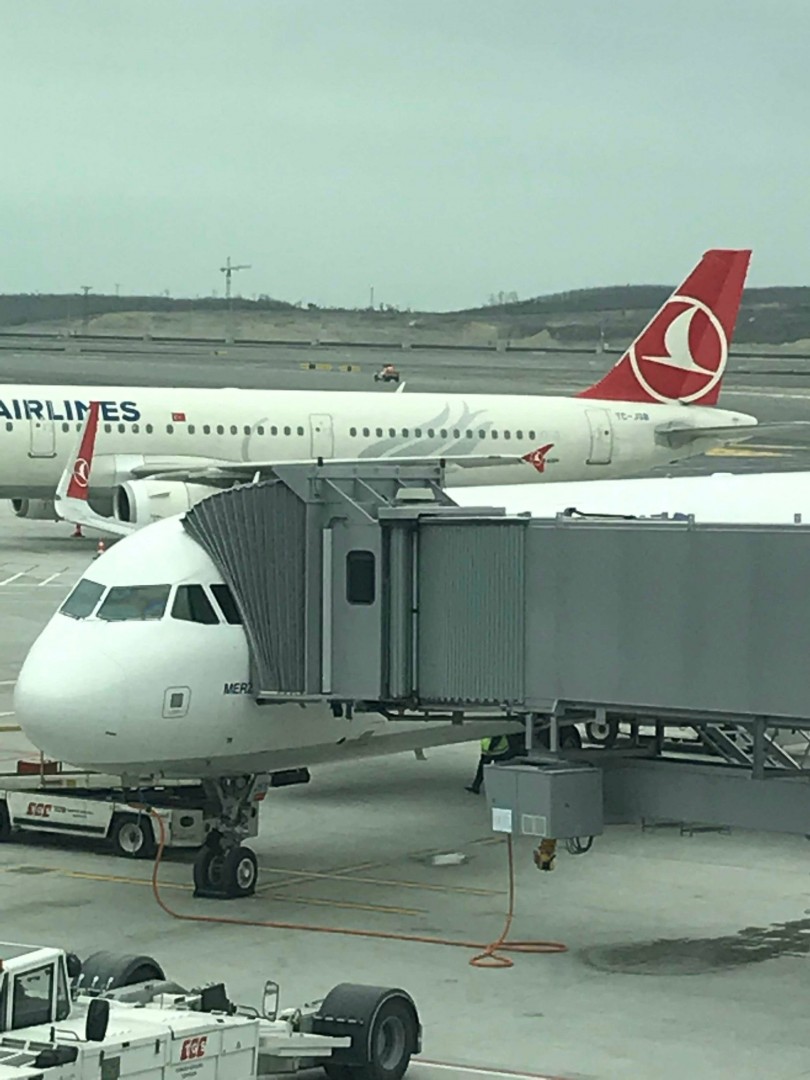 The coincidental moment that history hit me straight on the head

As soon as I reached the entrance door, the order I had taken in the line had broken up with an announcement. Then there was an announcement that said ‘Boarding will begin soon’. Then a queue started to form in the same place. I was just finishing an e-mail while waiting in that queue. After I sent the email, I raised my head, and saw an immense long line. I'm a member of Elite Plus (THY's top membership category) because I fly a-lot. Since Elite Plus and Elite members have boarding priorities, I tried to take my spot in that queue. I went back to the reception desk and asked the hostess, “Where are the Elite Plus members supposed to board from? The stewardess then said ‘From here”. I decided to wait right there, there was no one but me. Two minutes later people started lining up behind me. Suddenly this thought stumbled into my head while waiting for the first flight. I asked the ground hostess “Was there another flight before this flight?”. She answered “No, this is the first flight”. I then said, “So I'm going to be the first person on the first flight?” and she replied with, "Yes”. That's when the cameramen and some officials came along. They were recording this historical moment.

When I saw the cameras, I then suddenly thought to myself that I need to record this too. I shot the following video from my cell phone camera.

The video ended and boarding started. I turned off the camera, turned on the other screen on my phone, turned on my electronic boarding pass, and passed by showing my identity. At that point, the cameras continued to take footage of the officials. The following shots came about: 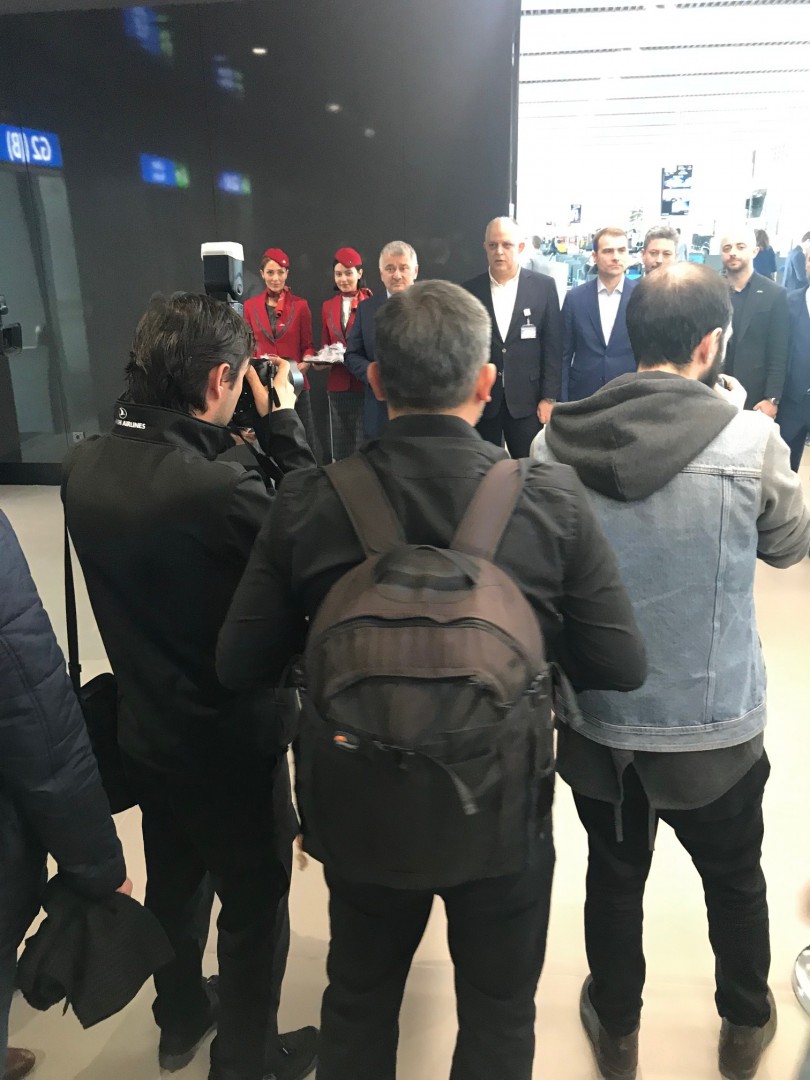 Then I thought I had to record this historical moment again while I was moving in the passenger boarding bridge. I turned on the camera and captured these images:

The first passenger step on the first flight

In other words, after moving the Atatürk Airport, to the new Istanbul Airport, I became the first passenger to board the first flight. Then I sat down in my seat which was 10C in the hallway. The other two passengers to sit by me arrived shortly after. Around 1.45pm, boarding was completed. Afterwards, the THY General Manager, Mr Bilal Ekşi made a speech in the plane. Here's a part of that conversation:

The doors closed after a couple of different announcements, but I couldn't resist when the plane was on the runway for almost half an hour, and I started stirring those who were sitting next to me by saying ‘I think they’re going to get us to Ankara by land”. The people next to me laughed. Then the person sitting by the windowsill said, "I think they're taking photos in front of the plane, that’s why we're constantly moving slowing over the tarmac”. Being on ground for so long meant I could spend some time uploading my feed on social media, the plane took off after half an hour and the announcements followed. I would now like to share the speech of the foreign pilot:

I would also like to share the announcement made by the Turkish pilot during the half-hour wait in the plane:

After a comfortable journey, the plane landed in Ankara at 3.20pm. When I had landed, I saw that I received many messages from my friends and from the news I read, I realized why we were waiting on the tarmac for so long. Here are the visuals from them: 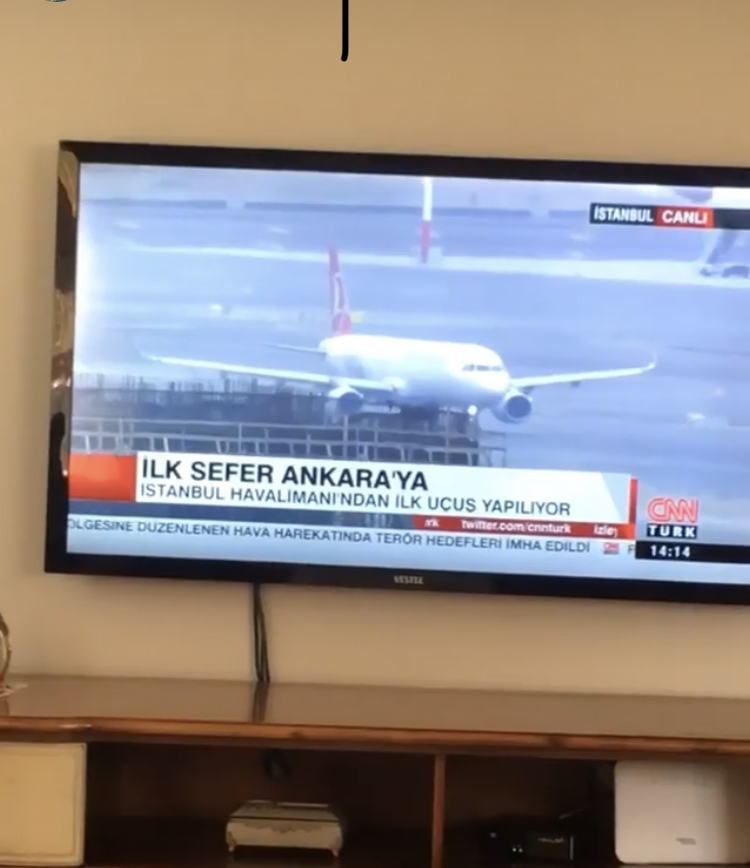 This is the news about the historical flight: http://m.hurriyet.com.tr/galeri-istanbul-havalimaninda-buyuk-goc-sonrasi-ilk-ucus-heyecani-41174171/1

“You went down in history quicker than I expected”

One of my friends sent me a message just to stir me by saying “Congratulations Serhan, you went down in history quicker than I expected”.

It's a good feeling to be a part of history. However, I would like to mention that I have seen many of the criticisms about the airport too. For example, I think the name of the new airport should have been “Istanbul Atatürk Airport”.


The death of workers and tree cutting

There were also two reasons why there was much debate in the construction of this airport. The first was the loss of the lives of many workers while the airport was under construction (I say God bless them all, I extend my condolences to their families).

The second criticism was that a significant number of trees were cut down to make room for the airport and the connecting roads, and that a massacre of nature was carried out. Posts were made in the press and social media. I asked a botanical company that we worked with out of curiosity, “Could work have been done in this region that they refer to as Istanbul's lung, without cutting down all the trees?”. The company's boss told me that with the Viaduct system, the tree cutting could have been much more limited by only cutting the trees that pass the highway and then transporting the trees on the foot (which would have been my preference). “Of course, making viaducts is a much more expensive solution than direct shaving down of trees, but this means you don't destroy nature in this way,” he said.

I think this expense would have been worth paying in order to protect nature. At least this now means that measures should be taken to prevent further destruction.

It is our fundamental right to be whole with nature. This should not be forgotten especially when you are in a role to serve people.